Commercial-off-the-shelf drones give terrorists the ability to launch attacks without complex support networks. 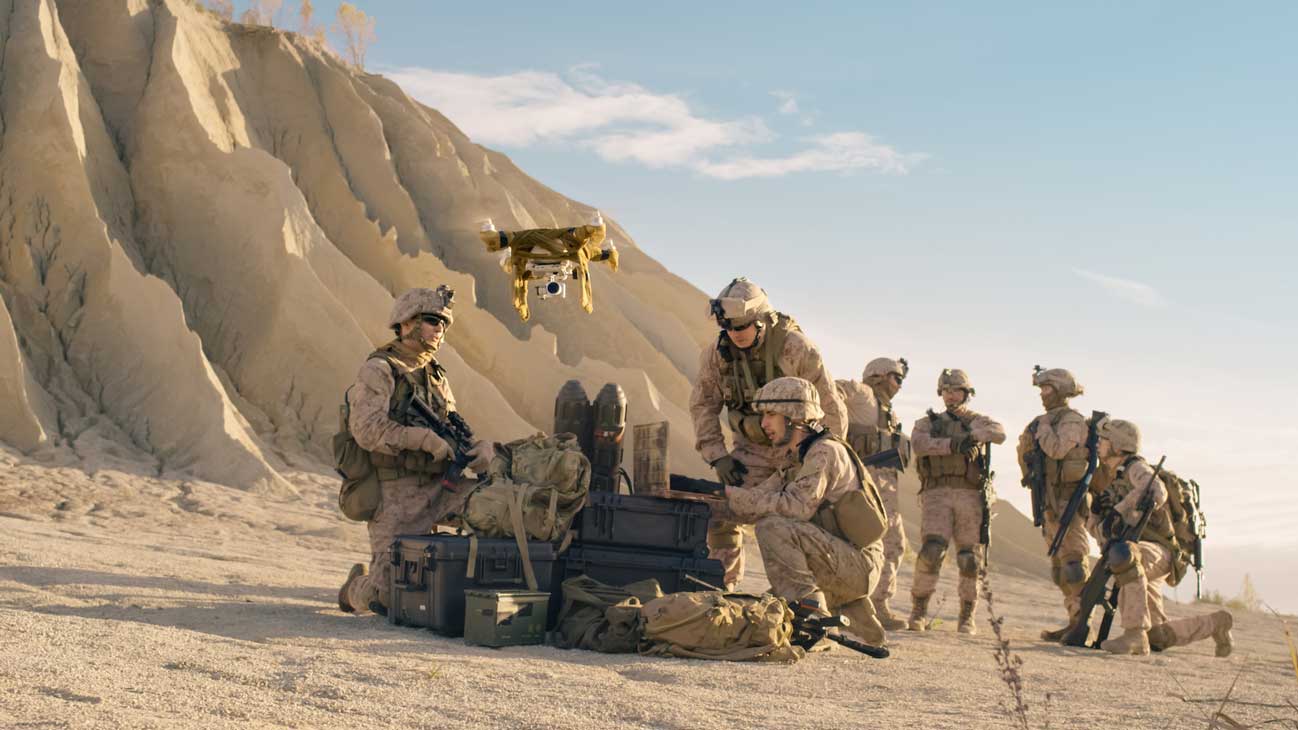 Aslick video shows bearded 'jihadis' examining a commercial off-the-shelf UAV. The video then transitions over a desert landscape as the drone hovers over a tank in a built-up area and drops a rudimentary bomb, scoring a direct hit. Although it is difficult to say how accurate these crude air strikes carried out by the so-called Islamic State (Daesh) are, the images of Iraqi forces on the receiving end of these attacks only having inaccurate small arms to counter them, demonstrates their lethal potential to terrorists and insurgents.

While military-grade UAVs like General Atomics' MQ-9 Reaper or the Heron family of UAVs are only available to large state actors that can afford the hefty price tag that goes along with them, commercial off-the-shelf (COTS) UAVs developed for the public market are readily available and accessible to anyone.

With global sales of civilian unmanned aerial systems tipped to reach $5 billion by 2021, in a February 2016 report, the Australian-based Armament Research Services says: “The booming civilian market for COTS small UAVs has made it easy for groups such as the Islamic State, Jabhat al-Nusra and Saraya al-Khorasani to support combat operations with UAV technology.”

In its report the ARS observes that there has been a significant increase in the quantity, variety, and capability of COTS small UAVs employed by non-state actors. These “man-portable, lightweight UAVs with advanced capabilities offer non-state armed groups tactical flexibility without the requirement for a complex support network, making them ideal for asymmetric conflicts,” the ARS report concluded.

Commercial UAVs also give armed groups unique capabilities for intelligence, surveillance, target acquisition and reconnaissance (ISTAR) missions and are sometimes modified for direct offensive use when converted to carry improvised explosive devices (IEDs) or other arms and munitions,” ARES continues. Even without arming these UAVs, the recent airport closures at Gatwick and Heathrow airports in the UK demonstrate how merely flying a UAV in commercial airspace can cause widespread disruption, panic and chaos.

UK-based radar firm Aveillant, which was acquired by Thales, has leveraged its expertise in making radars for observing the areas around wind farms to meet the  growing threat posed by COTS UAVs.

“These UAVs are small, low and slow,” says Aveillant’s CEO Dominic Walker.  For comparative purposes, he explains that small aircraft have a size, or “radar cross section”, of 5–10m2 ,compared to small UAVs, which are 0.01m2 (or less). Additionally, manned aircraft fly fast, at heights where there is little else for radars to detect, whereas small UAVs operate at slow speeds and low levels, meaning there is significant “clutter” to confuse radars.

Whilst traditional radars use a beam that scans an area (using either mechanical or electronic means), they can only scan one area at a time, explains Walker. Aveillant’s ‘Gamekeeper 16U holographic 'staring' radar uses a 2x8 mounted array to “floodlight an area”. The key advantage, Walker says, is that it looks at a target area all of the time, which means small UAVs can be detected at ranges of up to 5 km, as the constant illumination of the target provides increased sensitivity.

“We don’t believe any other civil radar has this proven capability,” he says. The current market for such a solution, says Walker, is in providing coverage to airports and other key sites in the aviation sector, in addition to critical national infrastructure such as nuclear power stations.

Aveillant was purchased by Thales in November 2017, and as Walker explains, they are in the process of being integrated into the Hologarde drone defence solution, which brings the Gamekeeper 16U radar together with radio frequency (RF) detectors, long-range HD infrared cameras and a customisable command and control centre. “Aveillant only produces radars,” says Walker. “But the collaboration with Thales opens the possibility of marrying Gamekeeper with countermeasures.”

The surge in illegal UAV activity has generated a large number of innovative counter-UAV systems. Of the systems Harkot mentions involving jammers, traditional weapons and raptors, these raise ethical issues and concerns around safety in civilian environments. Hertz Systems has therefore sought to develop an integrated solution, which brings detection and neutralisation together. The Hawk anti-drone system developed by Hertz includes a command centre connected to a radar and integrated camera (with a range of 5 km), which provides data to a hand-held neutraliser (to block UAV frequencies at ranges of 1,000 m).

“The Hertz Systems solution is a comprehensive one,” says Harkot. “We focus on multi-sensor detection, real-time tracking and neutralisation. The open structure of our system allows for full integration of additional sensors, required by the customer or environmental conditions in which our solution will be applied – urbanised areas, other architectural obstacles. This means that even the most specialised UAVs can be combated effectively with our counter-drone system.”

Hertz also pioneered the Drone Catcher solution, which uses a quadcopter UAV to launch nets to catch similar vehicles. “In many Western countries, mainly in the European Union, the use of hard-kill solutions in urban environments is highly problematic for public safety,” Harkot explains. “That's why we introduced Drone Catcher, a solution that effectively intercepts potential threats and transports the drone to a safe zone.”

Israeli company Rafael Defense Systemshas devised the Drone Dome. The system consists of a radar (with jamming capabilities) and a laser beam, which can neutralise small UAVs.

Justin Bronk, a research fellow for Combat Air Power and Technology at the Royal United Services Institute (RUSI) explains how Laser Directed Energy Weapons (LDEW) are likely to evolve going forward. “You need a pretty high-powered system with very good stabilisation and tracking,” he says, “which basically limits you to fixed positions or large moving platforms, ships being the obvious example. In the case of ships, they have huge potential utility, even though again they can be swamped because you need a significant amount of time on target to destroy each one, but the magazine is to all intent and purposes unlimited.”

Bronk says LDEWs don’t work very well in bad weather, for example in a sandstorm, rain or fog, as the energy is used up very quickly, either evaporating the rain or mist, as well as distorting the beam. He also raises the issue of response times, questioning whether in urban areas, LDEWs would be able to destroy each target quickly enough to neutralise incoming UAVs, especially if they were in a swarm using cover to limit engagement windows to a few seconds.

Swarms of small UAVs is one of the many issues which is likely to drive adoption of counter-UAV systems going forward, according to Walker. He also draws attention to experiments, which see UAVs mimicking the flight patterns of birds, meaning they could potentially fly to confuse counter systems. “The big challenge will be to evolve as the threat evolves,” he says.

On this theme, Harkot uses a historical analogy: “The sword was created, so the shield was invented. Drones appeared, we created the counter-drone system.”