Welcome to the future: A Hybrid Electric Drive configuration of the Foxhound patrol vehicle at Defence Vehicle Dynamics 2022. 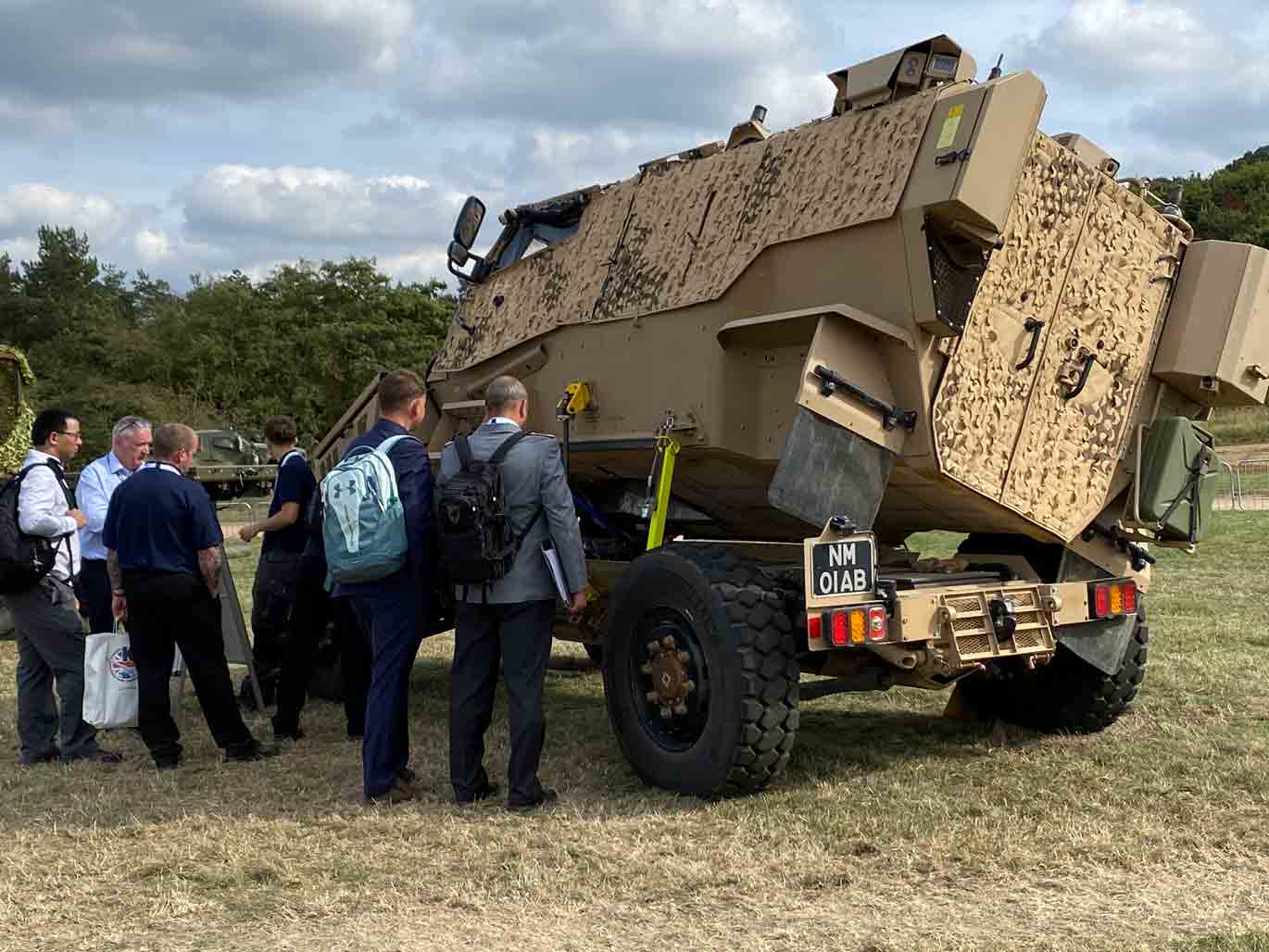 Lifting the lid on the Foxhound patrol vehicle at DVD 2022: A series hybrid electric vehicle configuration, which uses a diesel combustion engine to drive an electric generator, which self-charges the battery.

Anyone who attends British Army HQ's biennial Defence Vehicle Dynamics (DVD) show at UTAC Millbrook Proving Ground in Bedfordshire, will know that one of the biggest draws is that you get to experience what it is like to sit inside an armoured vehicle as it is put through its paces on Millbrook's off-road test track.

The minute you arrive at the off-road demonstration area, you are greeted by the sights and sounds of various armoured vehicles and trucks either pulling in on off the test track to pick up another batch of eager passengers or revving their diesel engines in preparation for tackling the windy and steep off-road stretches at UTAC.

In that respect DVD 2022, which ran from the 21–22 September at UTAC Millbrook— the first show since the pandemic — didn’t disappoint. There was the opportunity to hitch a ride on board vehicles like the Boxer 8x8, the Mastiff MRAP with its all-new suspension system that enables it smoothly navigate off-road terrain, Rheinmetall trucks, and a Polaris MRZR tactical vehicle.

In the static display area, you could also catch a glimpse of the kind of vehicles that are being fielded to support current and future Army vehicle requirements — different configurations of the Boxer, including the Demonstrator Overwatch with MBDA Brimstone, the Challenger 3 MBT, and Supacat’s concept demonstrator of a new Brimstone HMT Overwatch capability for Light Forces.

These are all  exciting vehicle concepts and represent a step change in protected mobility for the British Army, but one thing they all have in common is that they are powered by diesel engine. But with defence being one of the biggest contributors to governments Greenhouse Gas Emissions, the pressure is on to come up with alternative power sources for vehicles on the battlefield.

At DVD 2022 various hybrid-electric vehicle concepts were on display, including stealth e-bikes, which could potentially be used by paratroopers or special forces units. A British team comprising engineers from the world of motorsport (Red Bull, McLaren, Ferrari), debuted their 1.5 ton (dry weight) Modular Light Electric Platform (M-LEP) on Jankel's stand.

Borne out of a specific requirement to develop a vehicle that can operate as efficiently and sustainably in the polar ice caps, as well as the open desert, the M-LEP features an all-electric drive. The vehicle’s battery is constantly charged by a generator, which can be fuelled using either bio or aviation fuel, or potentially hydrogen fuel cells in future.

While the M-LEP is still in the prototype phase, in the middle of the off-road demo area at DVD 2022 were more well-known vehicle concepts — the MAN HX60 support vehicle, the Jackal combat reconnaissance vehicle, and the Foxhound patrol vehicle — fitted with different Hybrid Electric Drive (HED) configurations.

The three vehicles are part of the UK Ministry of Defence’s Technical Demonstrator 6 (TD6) programme currently underway at UTAC Millbrrook, which will inform the Army’s plans for electrification of the future battlefield.

Using electrification technology from UK-based company, Magtec, the Foxhound patrol vehicle  was converted into a series hybrid electric vehicle, which uses a diesel combustion engine to drive an electric generator, which self-charges the battery and powers an electric motor. 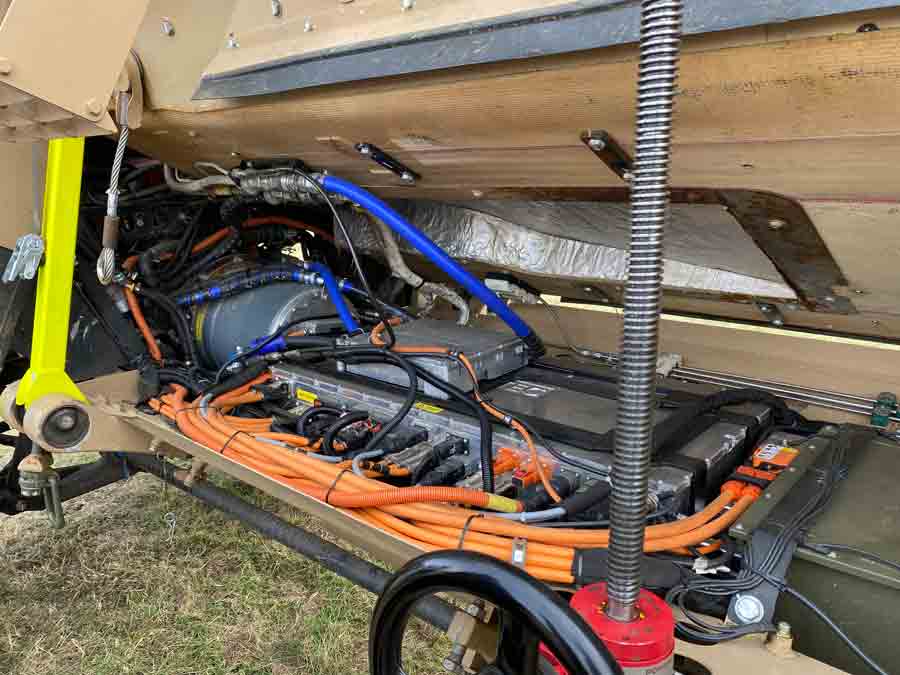 Thanks to HED, driving the Foxhound cross-country is now child’s play, said Tobias Gold from UK Defence Equipment & Support. For one thing, you don’t have to worry about changing gears as the gearbox has been removed, and manoeuvring it up steep slopes is a lot easier. The logistics footprint required to sustain a traditional Foxhound is also significantly reduced in terms of spare parts that are needed to maintain the vehicle in the field.

Cross-country, Gold estimates that HED enables fuel savings of at lest 20%, but the percentage varies depending on how the vehicle is being used.

Electric motors enable immediate rapid acceleration and greater freedom of movement, offering numerous tactical advantages across different terrains, says Magtec. Other advantages include the ability to deliver power at the point of need for military applications in the battlefield or emergency infrastructure in a disaster zone. For instance, one hybrid MAN support vehicle is capable of producing 500kw of power, equivalent to nine diesel generators, and could help power an Army field hospital.

The Jackal combat reconnaissance vehicle was fitted with a different drive train configuration featuring two 30kW batteries, and an on-board 60 Kw traction motor in each wheel, which provides 120 minutes of silent drive time off-road and maximum torque/wheel of 8,800Nm.

For the foreseeable future the focus is likely to remain on HED as all-electric vehicles have their challenges. Lithium-ion batteries don’t have the volumetric energy density and gravimetric energy density required to fit within the weight constraints of a practical tactical or armoured combat vehicle, and no one has come up with a viable solution yet for recharging batteries on the battlefield. Hydrogen fuel cells could provide an alternative power source, but they may not perform as well in a ruggedised military environment. Hydrogen storage on the battlefield is also challenging.

After being put through their paces at UTAC Millbook, the Foxhound, Jackal and MAN SV HED vehicles will be sent to the British Army’s Trials and Development Unit for user trialling.

The next electrification challenge for the Army will be investigating HED on tracked vehicles, which are typically heavier with massive torque requirements. “That’s not to say [HED] can’t be done,” says Gold, “but we haven’t been given a mandate to look at it yet.”