Milrem Robotics says its Remote Combat Vehicle, with the Cockerill remote weapons station, could provide additional eyes and firepower on the battlefield or logistics convoys. 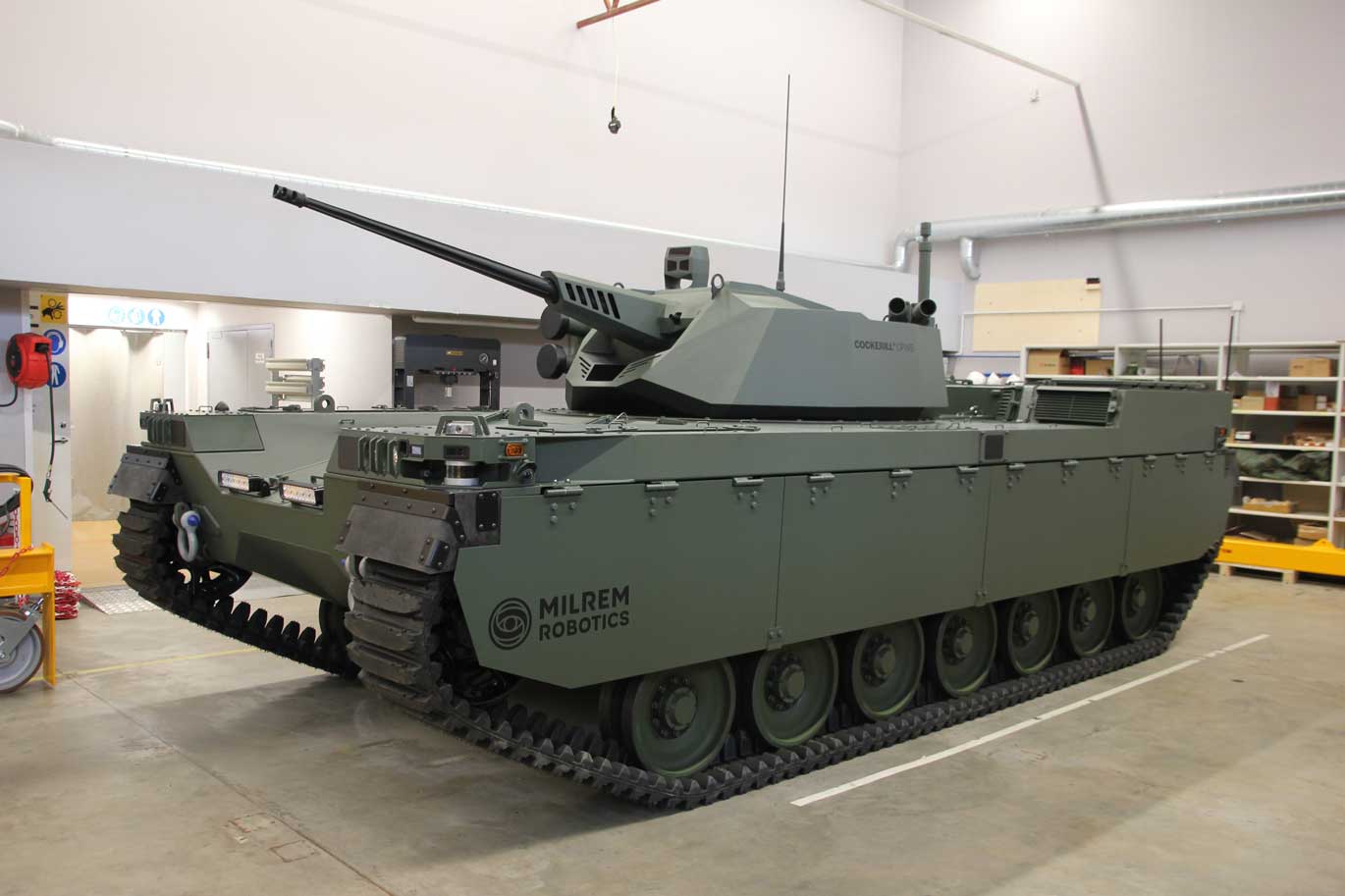 The Type X is the first combat vehicle that is purposefully designed to be unmanned and intended to be an integral part of mechanised units. Its chassis is a mobile modular multi-mission vehicle, which provides a platform for a family of unmanned armored vehicles.  However, analysts believe that vehicles like the Type-X and other forms of Unmanned Ground Vehicles are unlikely to replace manned armoured fighting vehicles in combat operations any time soon, given some of their operational constraints.

However, to assist with rapid deployment into combat operations, Milrem says the Type-X is designed to be deployed at a weight below the 12-ton mark so it can be either parachuted or transported by heavy lift helicopter.

A combination of augmented Artificial Intelligence (AI) and a remote system operator, the Type-X is a tracked vehicle with armour protection that can supplement troop formations or operate independently, in unmanned formations.

“The Type-X is modular and will accept larger turrets, but current turret designs are optimised for operations under armour,” Kuldar Väärsi, CEO of Milrem Robotics stated. “The CPWS II is a step in the right direction, as it is designed from the beginning to be a remotely controlled configuration (unmanned) and easy access from the outside of the turret, allowing for reload and maintenance,” Väärsi added.

Simon Haye, chief marketing officer for John Cockerill Defense added: “One of the first realistic roles for unmanned fighting vehicles will be convoy defence and perimeter or base defence. The Type-X with the CPWS can be placed in the front and rear of a convoy to provide additional eyes and firepower for the convoy. Rarely does a convoy have available 25 mm firepower and given the system is unmanned, tactics like rushing an ambush site, or manouvering on the enemy’s position are now legitimate options for a convoy under fire.”

Haye says the lead / follow functions of unmanned vehicles is well developed technology and spreading operator stations through the convoy can provide redundancy and quick response. “Further Forward Operating Base (FOB) security can now be in the form of a mobile unmanned fighting vehicle,” he said. “Instead of putting soldiers at risk on the wire, these guardian systems can provide relentless observation and the capability to manoeuvre and disperse an attack instead of just absorbing it.”

The CPWS II is a low-profile, light-weight turret, with a hatch opening that can mount the M242 25 mm X 137 mm Bushmaster cannon or the 230LF, 30 mm X 113 mm cannon. The CPWS II is a remotely operated turret, designed to fit onto 4X4 and 6X6 vehicles. The hatch can operate in three modes. The opening roof capability allows for the rapid reloading of the unmanned vehicle from the outside. Equipped with a 360-degree panoramic sight, with CCD, thermal and fused imaging, the CPWS represents a suitable partner to the Type-X Robotic Combat Vehicle. The turret can come with anti-tank missiles such as Alcotan, MMP, Javelin or SPIKE.

“Combining self-driving unmanned logistics vehicles with the Type-X you can reduce the personnel required for a convoy to a few operators, while actually increasing the capabilities of defending the convoy,” said Väärsi of Milrem Robotics. “This is not just a leap forward in force protection, but a force multiplier.”

During the demonstration, Milrem Robotics unveiled its Intelligent Functions Kit (IFK), which converts any vehicle into a self-driving or remotely controlled one. IFK is a modular hardware and software kit providing a ROS2-based environment for different functionalities, which can be provided by Milrem, the customer or a third party. The IFK has been developed for Milrem's  THeMIS UGV and Type-X, but can be adapted to any other vehicle with drive-by-wire integration.

Many countries in Europe, as well as the UK and US, are experimenting with integrating unmanned ground vehicles into a wide range of operations, including dismounted infantry patrols, resupply to the frontline, or even a combat role. However, analysts say clear use cases for UGVs within the military have yet to be established, and that while these platforms may appear lower cost than traditional armoured fighting vehicles, they could end up costing more given the need to recruit specialist staff to operate and maintain them in the field. The remote control aspect of these type of vehicles, as opposed to operating them fully autonomously, also makes them more susceptible to hacks and jamming by enemy forces.

Among NATO countries, the US Army is the most advanced in terms of preparations for a robotic future. In January this year, the US Army Ground Vehicle Systems Center and the Next Generation Combat Vehicles Cross Functional Team announced its intention to award contracts to QinetiQ North America to build four light and to Textron to build four medium Robotic Combat Vehicles (RCVs). The RCVs will form part of the Army’s Robotic Campaign of Learning, which will determine the feasibility of integrating unmanned vehicles into ground combat operations. A company-level experiment of the RCVs is expected at the end of next year.

In February, the US Army also reopened the competition for its Optionally Manned Fighting Vehicle to replace the M-2 Bradley, which forms part of its Next Generation Combat Vehicle programme.