Rheinmetall unveils a new tank, for a new era at Eurosatory 2022 in Paris, the KF51 Panther, which sets new standards in lethality, survivability, and mobility. 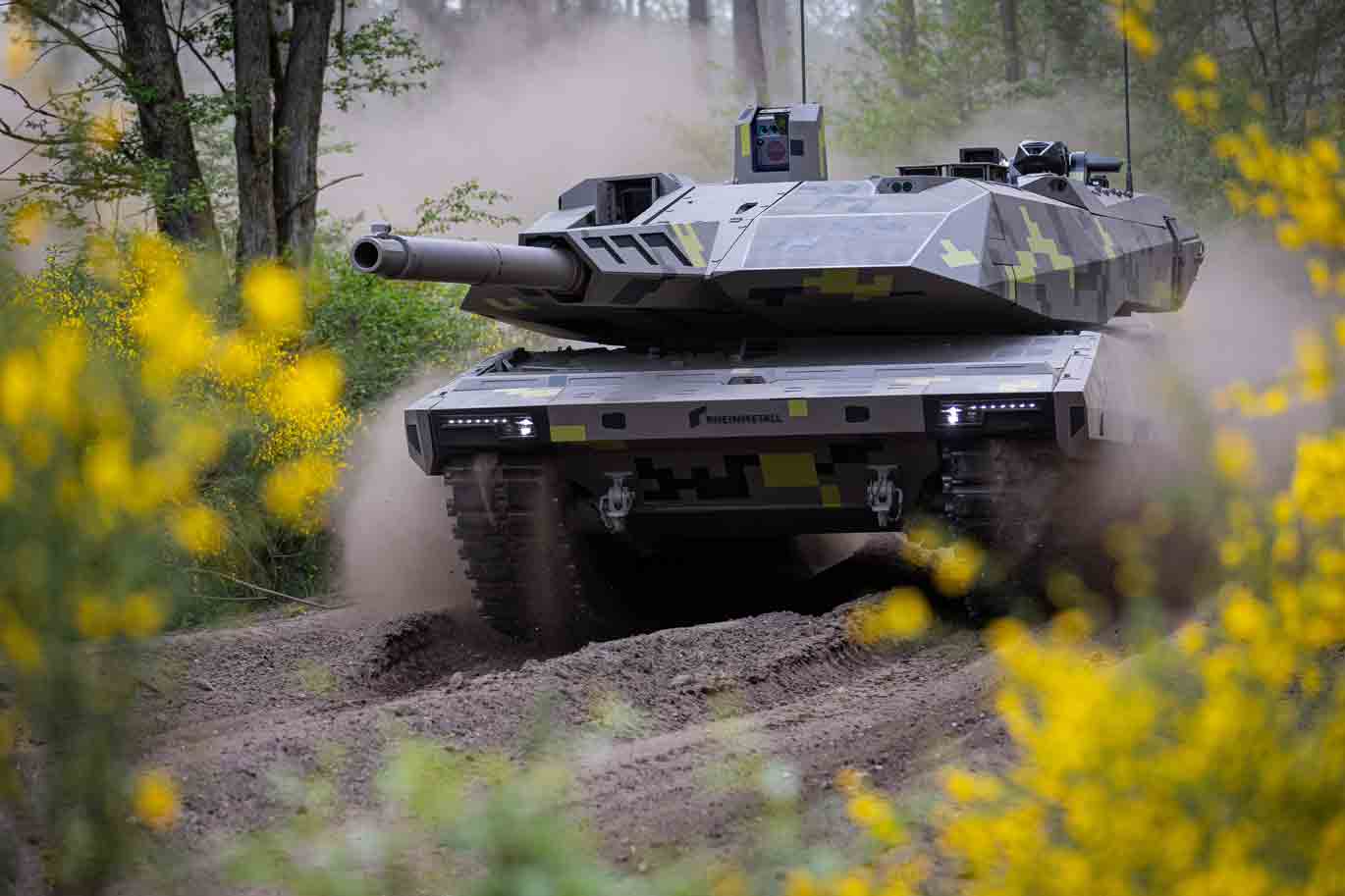 The KF51 Panther sets new standards in lethality, protection, reconnaissance, networking and mobility, according to Rheinmetall

We've all seen footage of Russian tanks being pummelled by Bayraktar drones, anti-tank guided missiles and NLAWS in Ukraine. But Rheinmetall has unveiled what it is calling “a new tank for a new era” — the KF51 Panther, which it presented for the first time at Eurosatory 2022 in Paris on Monday.

KF, which is short for "Kettenfahrzeug", i.e., tracked vehicle, sets new standards in lethality, protection, reconnaissance, networking and mobility, and is Europe's first new tank concept, outside of Turkey's Altay tank and Russia's T-14 Armata tank, with an unmanned turret, which was previewed at the 2015 and 2016 Moscow Victory Day parades.

In developing the KF51, Rheinmetall not only set out to modernise the existing main battle tank concept. It completely redesigned the platform from scratch. The KF51 Panther's modular, open NGVA system architecture means it can be easily updated and equipped with the latest capabilities and functions.

“The KF51 is the first representative of a new generation of combat vehicles,” says Rheinmetall. “Soon, future innovations will enable environmentally friendly peacetime operations and further optimisation regarding automation and combat effectiveness.”

The fully digitalised NGVA architecture means all weapon systems on the KF51 MBT are connected to the commander's and gunner's optics and the fire control computer, which enables both a 'hunter-killer' and a 'killer-killer 'function and thus instantaneous target engagement, which, according to Rheinmetall, will be supported in the future by artificial intelligence (AI).

The KF51's main armament is the 130 mm Rheinmetall Future Gun System. Rheinmetall says further armament options are available to provide concentrated firepower for long-range strikes and against multiple targets. The 130 mm gun is said to be designed to counter new versions of Russian armoured combat vehicles such as the T-14 Armata tank.

The KF51 can launch UAVs and Loitering Munitions

Building on Rheinmetall's joint venture with Israel's UVision, a launcher for the HERO 120 loitering munition can also be integrated into the turret, enhancing the KF51's ability to strike targets beyond the direct line of sight.

The Panther is designed to control assigned unmanned aerial vehicles such as on-board or off-board drones, loitering ammunition and a range of uncrewed ground vehicles.

The fully digitised system and common crew stations are the enablers for true Human-Machine Teaming and control of wingman UGVs that cover capabilities such as platoon-level air and drone defence.

Survivability and force protection: The Panther has a fully integrated, comprehensive, weight-optimised protection concept, incorporating active, reactive and passive protection technologies. “Without a doubt, the concept's most compelling feature is its active protection against kinetic energy threats,” says Rheinmetall. “It increases the level of protection without compromising the weight of the system.”

With the lessons already being learned from the war in Ukraine in terms of the vulnerability of tanks to top attacks, Rheinmetall's Top Attack Protection System (TAPS) wards off threats from above, while the ROSY smoke/obscurant systems conceals the KF51 from enemy observation.

Moreover, the tank's digital NGVA architecture enables integration of additional sensors for detecting launch signatures. Thanks to its pre-shot detection capability, Rheinmetall says the KF51 Panther can recognise and neutralise threats at an early stage. Designed to operate in a contested electromagnetic environment, the KF51 is fully hardened against cyber threats. 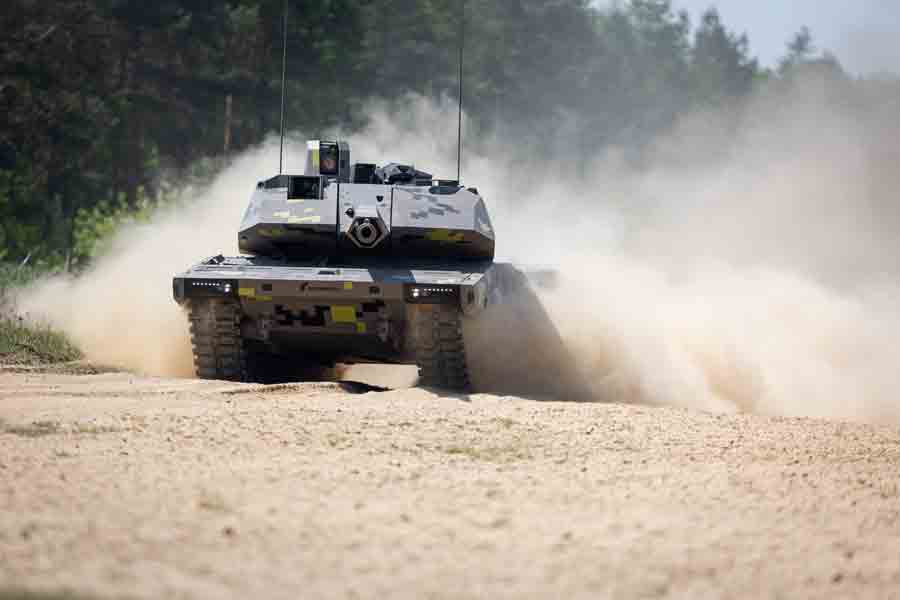 Controllability and networking: The KF51 Panther is  designed for a three-person crew: the commander and gunner in the turret and the driver in the chassis. An additional operator station is available for a weapons and subsystems specialist or for command personnel such as the company commander or battalion commander.

Designed in accordance with NGVA standards, the tank's fully digital architecture supports the seamless integration of sensors and effectors both within the platform as well as into a networked "system of systems". The operation of sensors and weapons can be transferred instantly between crew members. Each operator station can take over the tasks and roles from others, while retaining full functionality. Since the turret and weapons can be controlled from the operator stations in the chassis, variants of the KF51 Panther with unmanned turrets or completely remote-controlled vehicles are also planned in the future.

Reconnaissance and situational awareness: Thanks to the panoramic SEOSS optical sensor and EMES main combat aiming device, the commander and gunner are both able to observe and engage targets independently of each other, both day and night, while a stabilised daylight and IR optic with integrated laser rangefinder is available to both.

In addition, via a display in the fighting compartment, the crew has a 360°, round-the-clock view of the vehicle's surroundings. Integrated, unmanned aerial reconnaissance systems enhance the crew's situational awareness in built-up areas and in the immediate vicinity of the vehicle. With these systems, Rheinmetall says the crew can also conduct reconnaissance under armour protection and share the results with other actors in a networked manner.

Mobility: The KF51 Panther builds on the mobility concept of the Leopard 2. With an operational weight of just 59 tons (the Leopard 2A6 is 62.3 tons and the Leopard 2A7V is 66.5 tons) it delivers far greater mobility than current systems and has a maximum operating range of around 500 kilometres. Without prior preparation, it fits into the AMovP-4L profile, something no other current main battle tank upgrade can do., according to Rheinmetall. Consequently, the KF51's tactical and strategic mobility are said to set it apart.