What has Turkey gained by lifting its veto against Sweden and Finland's NATO membership?

At NATO's recent Strategic Summit in Madrid, Turkey lifted its veto against Sweden and Finland joining the military alliance. But what did it gain in return? 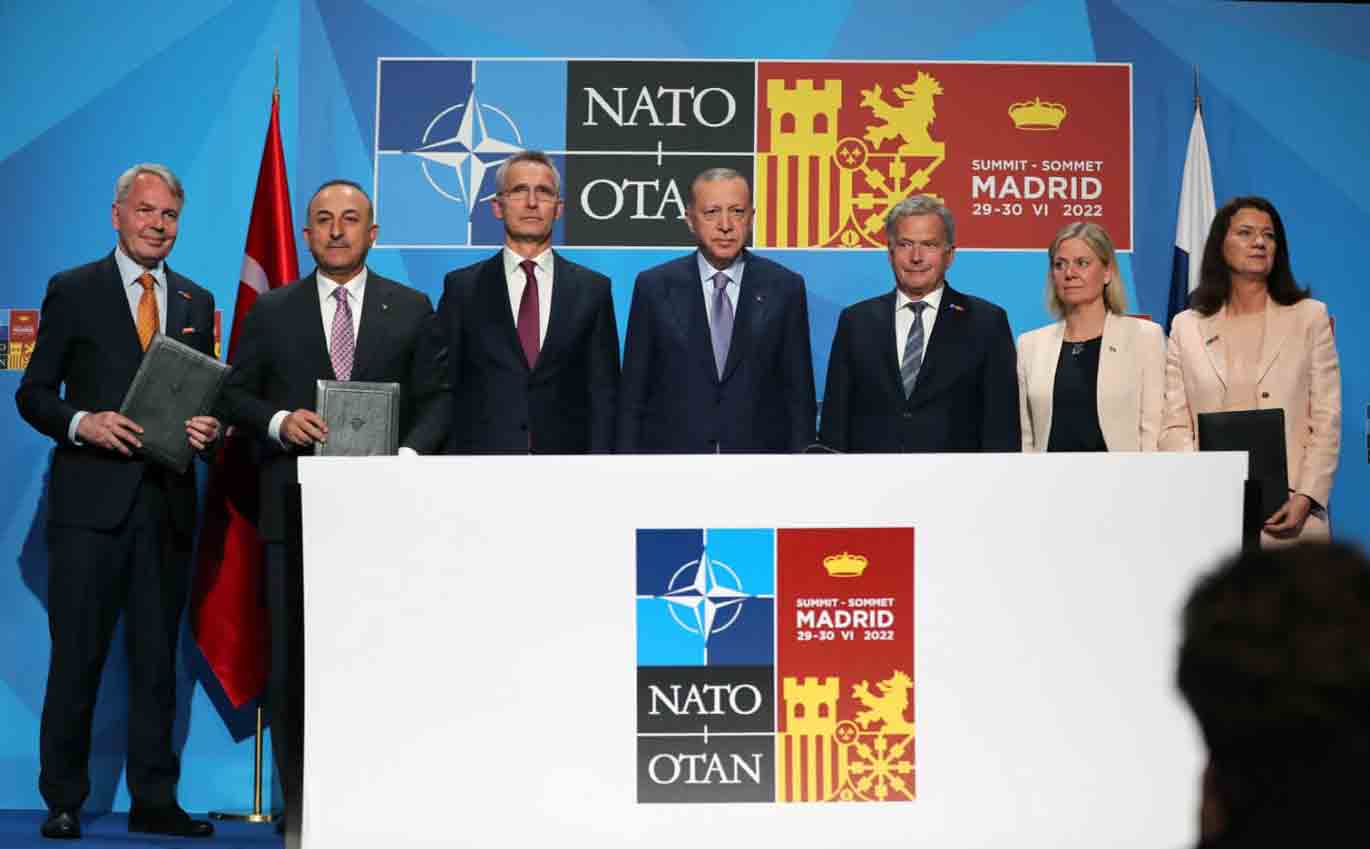 Turkey, Sweden and Finland's leaders pose alongside NATO Secretary General Jens Stoltenberg following the signing of a "Tripartite Memorandum" at the NATO Madrid Summit to support Finland and Sweden becoming NATO members. (Photo courtesy of Directorate of Communications of the Turkish President)

After weeks of blocking Sweden and Finland's application to join NATO, last week at the NATO Summit in Madrid, Turkey, finally lifted its veto, paving the way for the two Nordic countries to join the military alliance. But what was behind Turkey's change of heart?

The agreement paved the way for not only the two Scandinavian countries to join NATO, but also met Turkey's demands with respect to its "fight against terrorism." The most significant aspects of the Memorandum are as follows:

·       Finland and Sweden, as future NATO allies, fully support Turkey against all threats to its national security.

·       Finland and Sweden affirmed in the deal there were no national arms embargoes relating to sales to Turkey, and all three countries said they would work together on extradition requests regarding PKK members.

Why did Turkey initially object to Finland and Sweden’s NATO membership?

Turkey was opposed to Sweden and Finland joining NATO due to their differing perspectives on Turkey's fight against terrorism and arms embargoes they had imposed following Turkey’s incursion against the Syrian Kurdish YPG militia in 2019 in order to create a buffer zone in the border area.

Speaking to Defence Procurement International, Ferdi Güçyetmez, a Swiss-based academic researcher on European security, underlined the significance of the dependency of NATO allied countries, as well as the subjects that Turkey is uncomfortable with in the alliance.

“NATO is an institution whose members are only institutionally dependent,” says Güçyetmez. “This dependency and communication can be broken when the interests and security of countries are at stake.”

With respect to Turkey’s objections, specifically its fight against terrorism, Güçyetmez says, “There are many issues that Turkey is uncomfortable with and legally struggles with within the scope of NATO, including international terrorism.” The PKK, which Turkey has been fighting with on its borders since 1980 in the north of Syria also operates under other names today.

For this reason, Güçyetmez says Turkey has vocalised its discomfort against terrorist organisations that have emerged under different names. Especially because of the actions carried out by PKK sympathizers in Stockholm, Turkey made attempts again to highlight its concerns when Sweden applied to join NATO in May.

Güçyetmez also highlighted Turkey's importance to the NATO alliance, which has become increasingly apparent during the Russia–Ukraine war. Turkey has not only supplied weapons to Ukraine, namely its TB2-Bayraktar UAV, which has successfully attacked Russian armoured positions, but

“With its maritime border to Russia, its links with the Middle East and its eastern borders to Asia, Turkey is a militarily strong member of NATO. Europe, which has been establishing a dialogue for the membership of Sweden and Finland today, may have to ask Turkey for help.”

Another critical topic of the signed memorandum at the NATO Summit is Madrid is the lifting of arms embargoes imposed on Turkey by Sweden and Finland.

Prior to the NATO Summit, Turkey drew international attention to its counter-terrorism efforts as well as the arms embargo imposed on it through a variety of channels.

Mehmet Cem Demirci, a Turkish political and security analyst, claimed that Turkey had a successful perception management strategy prior to the negotiations on this issue. “Turkey tends to produce the most military products in line with national resources,” he explains. “Although Turkey does not import significant products from [Sweden and Finland], the lifting of the arms embargoes is important because it sets an example for other European nations.”

But has Turkey really got what it wanted? The geopolitical fractures following Russia's war in Ukraine and the security requirements of the Euro-Atlantic region necessitated that NATO’s new Strategic Concept, which will guide the activities of NATO until 2030, was announced to the world in cooperation with NATO and its members.

In this context, it would be irrational to veto the membership application of Sweden and Finland, which are closely linked to European security and have long participated as partners in NATO exercises, as Turkey would lose more than it would gain, according to Demirci

“It makes more sense to concentrate on what Turkey has gained,” he says. “After the agreement was reached, Turkey had another opportunity to present to the world the justification of its fight against terrorism and the groups it is fighting. In terms of strategic communication, this is a success that should not be underestimated.”

Güçyetmez agrees, saying “Turkey seems to have gotten what it wanted on paper regarding terrorist organisations. However, time will tell whether Finland and Sweden will comply with these conditions.”

Turkey has reconciled with Sweden and Finland ahead of one of the most important summits in NATO’s history, which has made an important contribution to unity and solidarity at a very critical time. This prevented NATO’s new Strategic Concept from being overshadowed by Sweden's and Finland's membership applications.