Russia’s invasion of Ukraine looks like conventional warfare on steroids. But focusing on traditional tactics, may prevent us from seeing the advantages of a ‘sneaky war’ against Russia. 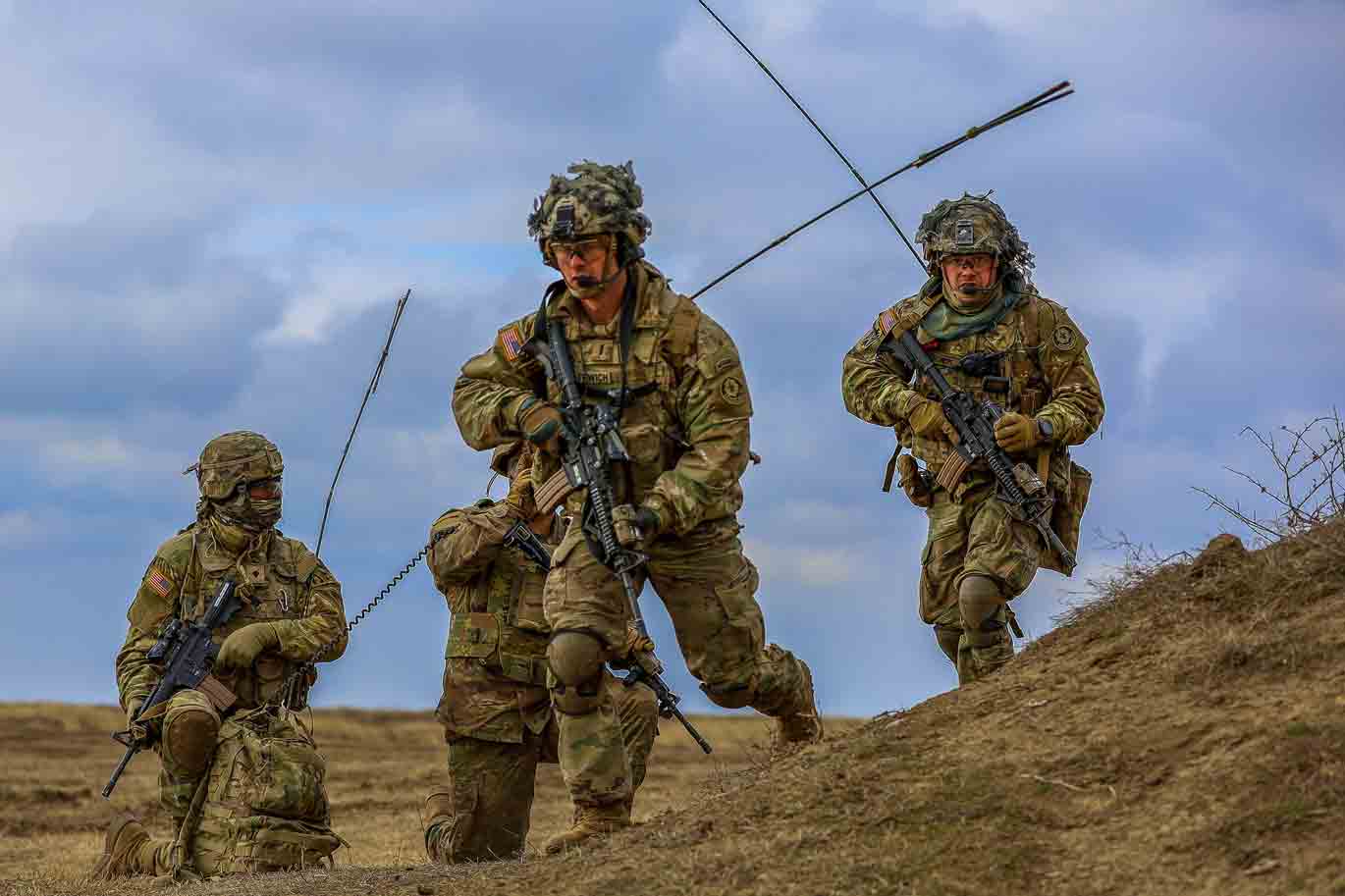 Russia’s invasion of Ukraine looks like conventional warfare on steroids. But our obsession with industrial-strength militaries and traditional tactics, says Sean McFate, may prevent us from seeing the advantages of a ‘sneaky war’ against Russia.

Russia rang in the new year with the first blitzkrieg since Hitler. Tanks trampled Ukraine, and millions of civilians fled in the middle of winter seeking refugee camps that do not exist. Putin justified the brazen actions by casting the invasion as ‘peacekeepers ‘who would “de-militarise” a “Neo-Nazi” regime that committed genocide. Never mind that peaceful Ukraine sacrificed eight million people fighting the Nazis during World War II, and Ukrainian President Volodymr Zelenskyy is Jewish.

February held another important 'first.' It was the first conventional war in 40 years, the last ones being the Iran-Iraq War and the Falklands War in the 1980s, and the first in Europe since World War II. Conventional warfare is state-on-state armed conflict fought by industrial-strength militaries, like gladiators. Battlefield victory is everything and determines winners and losers in global affairs. The epitome of conventional warfare is World War II, which we call the “Good War,” fought by the “Greatest Generation,” as opposed to the quagmires of Korea, Vietnam, Iraq, and Afghanistan.

Nearly 80 years later, Hollywood still pumps out WWII movies, while other American wars are forgotten. For the defence community, “Great Power Competition” is code for conventional warfare and is enshrined in recent national security and defence strategy.

Both the Pentagon and the public are paradigm prisoners of conventional warfare because it’s the last time we won decisively. But it is sentimentality, not strategy, and why we cannot win against crude unconventional foes like the Taliban. No one fights this way anymore, and there is nothing more unconventional than conventional war. The data is quite clear: Conventional wars have been extraordinarily rare since 1945.

But then Russia invaded Ukraine. So, what next? Owing to America’s obsession with conventional warfare, expect the US national security establishment to learn all the wrong lessons from the Russian-Ukrainian War. In its earliest days, pundits were already declaring a “new epoch” in international security, as if the past 70 years of unconventional war were erased. It’s pure confirmation bias, and symptomatic of small thinkers.

Expect Congress to push bigger defence budgets for ultra-conventional weapons like super-expensive F-35 fighter planes, Ford-class aircraft carriers, and artificial intelligence tanks. For the defence industry, Santa is coming to town. For the military gray-beards, it’s about defeating Russians in the Fulda Gap once again, Tom Clancy style. Rejoice! No more messy quagmires, where battlefield victory is obsolete. No need to think critically or think at all. For those stampeding with the herd mentality, there is no problem fire power cannot fix.

But this is dangerously naive. Assuming we are in a new epoch reminiscent of WWII because Russia used tanks is misguided. It would be like seeing horse cavalry in 1914 and assuming the future of WWI would look like the Napoleonic campaigns. Also, let’s not forget that Russia employed a multitude of unconventional stratagems too, such as cyber attacks, thick disinformation, and Wagner Group mercenaries.

Lastly, conventional warfare works best when it is the strong attacking the weak. Do not expect Russia to invade Virginia with amphibious landing craft or roll across the plains of Europe. Russia knows we are unrivalled at military-on-military battles, and to attack us this way is suicide. More critically, it would most likely end in nuclear Armageddon. But our adversaries also know that the US struggles against unconventional war foes, even primitive ones like the north Vietnamese and Al-Qaeda. Guess how Russia and China will come after us? Correct. Unconventional warfare, not WWII style conflict. In fact, many believe they already are.

If we want to fight Russia and not risk a nuclear war, then it’s time to get sneaky. Clever strategists know that war begins long before the first shot is fired and ends the same way. This is how we fought and won the Cold War, yet curiously we have forgotten how. Many in America think using underhanded tactics and the dark arts of strategic deception are somehow immoral. But is it somehow better to lose honourably than win dishonourably? I think Ukrainians would vote for the latter, and so should we before it’s too late.

What would a sneaky war against Russia look like? First, let’s keep our superlative conventional forces as a deterrent and safeguard. Firepower is not what it used to be in war, but it still matters. Second, let’s find some evil geniuses in the US to get under Putin’s skin, so he makes a mistake we can exploit. For example, he hates revolutions like the Orange Revolution, a series of protests, which occurred in Ukraine in 2004. So let’s start a few. The Russian empire has a long history of bullying its neighbours, leaving centuries of animosity. 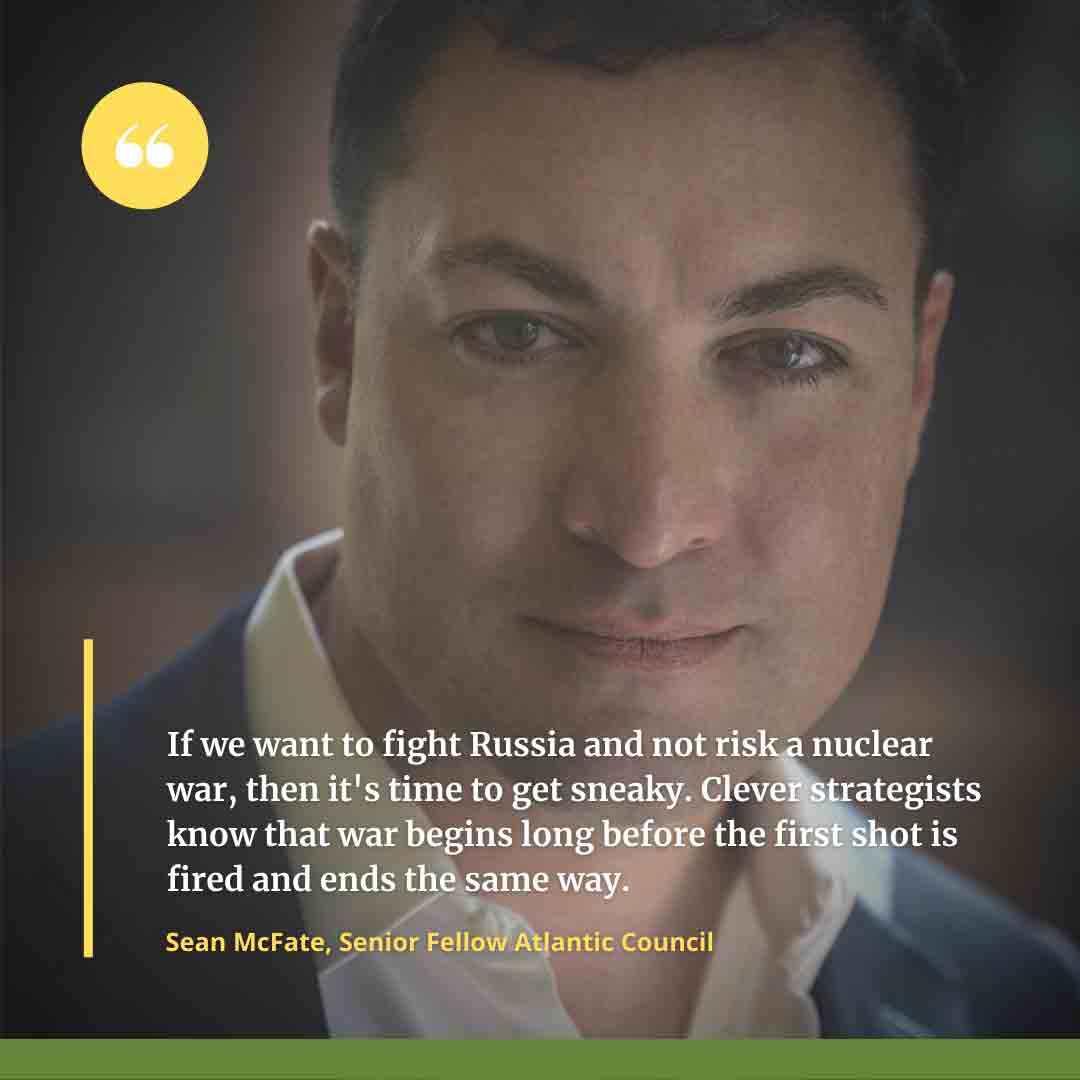 Let’s prop up those neighbours and get them out of Putin’s “sphere of influence.” While we are at it, let’s find an effective wedge strategy to fray the China-Russia alliance. Those two countries have never gotten along, so why let them start now?

Should a viable insurgency emerge in Ukraine, let’s help it out. We possess the perfect tool for the job — US Army Special Forces or Green Berets — which were created during the Cold War to raise anti-Russian resistance movements. However, we cannot risk them working on Ukraine soil, lest a firefight breakout with Russian soldiers, followed by mushroom clouds. Owing to this, let’s base the Ukrainian insurgency out of neighbouring NATO countries like Romania or Poland. Nothing erodes Russian popular support for war than seeing their troops come home in body bags, as was the case during the failed Soviet-Afghanistan War. Russian mothers of casualties protested across the USSR, something Putin remembers well, no doubt.

There are other sneaky stratagems. We live in the information age, and we have witnessed the power of Russian malign disinformation. Let’s fight fire with fire, after all who is better at cunning information warfare? The US invented Hollywood and Madison Avenue. Russia would stand little chance if American politicians weaponised their knowledge of negative ad campaigns, stoking fake news, and overall wiliness.  Of course, the best information weapon we possess is the truth. Let’s supply “pirate VPNs” to Russians and let them Google whatever they desire. Putin’s carefully cultivated hero of the Russian Empire schtick will begin to slump.

Lastly, let’s get nasty. People often bemoan how democracy is disadvantaged in modern war. Autocracies can blast us with disinformation and hack our elections. But democracies are resilient while autocracies are brittle, and we can exploit it. Autocracies concentrate all their power among an elite coterie based around an autocrat, who has a god-like ego, but always fears a palace coup. Let’s covertly create the impression that some of Putin’s lieutenants want to replace him; in response, Putin will take out his lieutenants for us.

War is more than warfare, and warfare is more than killing. Sneaky war is our future, not conventional fighting, because, in the modern era, cleverness triumphs over brute force. The conventional phase of the Ukraine war will end. Hopefully, the Department of Defense realizes that the conflict is not resolved. It probably won’t, which is a tragedy, because we are blinded by our obsession with conventional war. But there are many ways to win, and some of the best weapons don’t fire bullets. Fortunately, our country has a proud tradition for shrewdness if we care to remember, and it is time to rethink the strategic dark arts again. When the going gets tough, the tough get cunning.

This article appeared in our Q1 2022 issue. To read more articles like this, subscribe to the magazine

Sean McFate is the author of five books, including “The New Rules of War: How America Can Win — Against Russia, China, and Other Threats” (2019). He is a Senior Fellow at the Atlantic Council, professor at Georgetown University, and an adviser to Oxford University’s Centre for Technology and Global Affairs. He served in the US Army’s 82nd Airborne Division.