The Royal Navy continues to ramp up its presence in the underwater battle-space domain with a significant investment in autonomous submarines.

The Royal Navy is developing an autonomous test submarine. An initial £1-million contract was awarded to Plymouth-based MSubs to build a test submarine that will be used to explore the potential capabilities of larger uncrewed underwater vehicles in the future.

M-Subs will convert its manned S201 submersible into an unmanned vehicle for the project. Measuring approximately 30 feet in length, the extra-large autonomous submarine is significantly larger than autonomous submarines used for beach reconnaissance, allowing it to operate at a range of 3,000 nautical miles.

The First Sea Lord, Admiral Tony Radakin, announced the contract at the Underwater Defence & Security Symposium in Southampton. The First Sea Lord noted how the Ministry of Defence wants to increase its presence in the underwater battlespace and is exploring the use of extra-large uncrewed underwater vehicles (XLUUV) for surveillance, reconnaissance, and anti-submarine warfare operations.

“I am enormously excited about the potential for remotely piloted and autonomous systems to increase our reach and lethality, improve our efficiency and reduce the number of people we have to put in harm’s way,” the Admiral stated.

“These XLUUVs are at the forefront of underwater systems technology; UK technological developments such as this will be key to the Royal Navy maintaining its battle-winning edge in the underwater environment.

“XLUUV submarines are especially adept at covert intelligence gathering. They can leave their dock autonomously and secretly move to the operational area without any embarked crew for up to three months. They are also able to sense hostile targets and report their findings back to the station, making them an important barrier for anti-submarine warfare.” 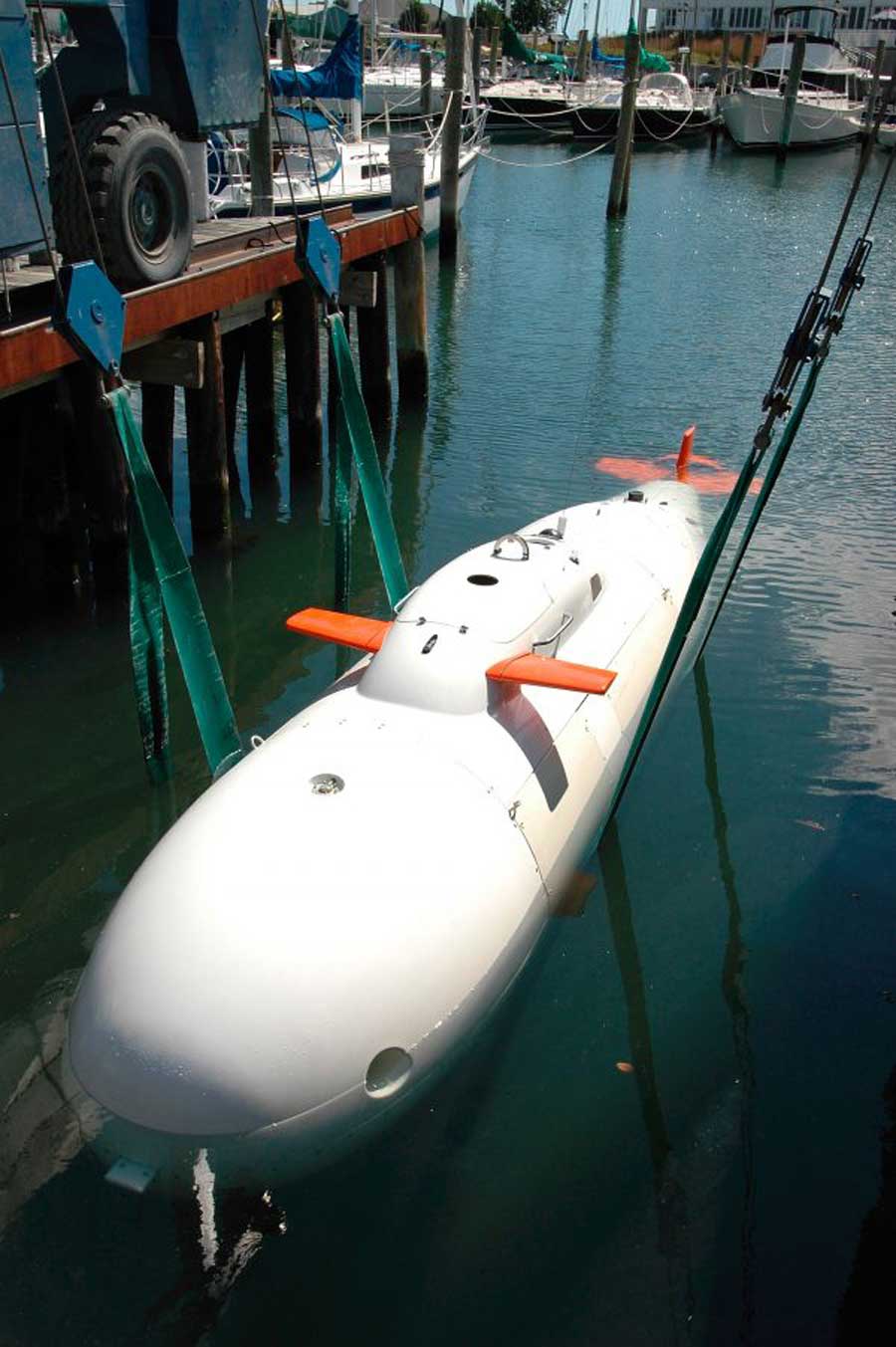 XLUUVs will be expected to possess payload-agnostic spaces of >2m3  and 2 metric tonnes. Other requirements include:

While the naval community has embraced unmanned systems, particularly in the mine countermeasures domain where navies are deploying a hybrid of manned/unmanned systems to maintain a safe distance from the mine threat and to cover larger areas when it comes to mine detection and clearance, the anti-submarine warfare (ASW) community have been much slower to adopt unmanned systems, namely because of the complexity of the environment they operate in and their requirements for stealth and endurance. Up until recently, most nmanned underwater vehicles were only able to operate for short periods of time.

If UUVs are to be used for ASW and underwater intelligence gathering, endurance will have to increase significantly. But the fact that the Navy is now seriously considering a future where unmanned submarines could potentially play a role in intelligence gathering and ASW is a huge step change for the Royal Navy. Unmanned systems are still relatively underutilised by the British Navy and are mostly confined to missions such as mine countermeasures.

Admiral Radakin told the Underwater Defence and Security Conference in early March that the underwater environment had always been defence’s biggest problem.

“For my entire career we have been talking about oceans becoming transparent,” he stated.  “And yet they remain opaque. We continually horizon scan, analyse new developments, look at the capabilities that we and our adversaries possess – and there is nothing.

“On the land, in the air, increasingly even at sea, there is nowhere left to hide. But underwater remains impenetrable. This is good for us. The Royal Navy has the huge responsibility of delivering the nuclear deterrent on behalf of the nation, and still the cheapest, most secure and most effective means of doing this is by submarine.”

But will XLUUVs eventually replace manned submarines. That seems unlikely, at least in the near term. A lot of countries, including the US, UK, Germany, and many Asian countries are investing in new manned submarine capabilities, which will have a lifespan of more than 30 years.

Furthermore, unmanned systems in the underwater space is still a relatively new exploratory domain for most navies, so they are likely to spend a period of time getting comfortable with using these systems and testing their reliability, as well  addressing issues such as integrating these systems with the command and control systems of manned naval platforms so commanders have an integrated picture of the battlespace. So for the time being at least, XLUUVs are likely to complement, rather than replace, manned capabilities underwater and to focus on the "dull, dirty and dangerous" tasks that are performed better and more safely by machines rather than humans.

Procurement of these systems is also likely to prove challenging. Decades-old procurement practices of long and expensive programmes for designing, building and acquring complex naval capabilities will have to be dispensed with if Navies are to be able to fully exploit these technologies, which are evolving rapidly.

The Royal Navy's Navy X programme, a new Autonomy and Lethality Accelerator, aims to rapidly develop, test and trial cutting-edge equipment, including autonomus surface vessels, with the aim of getting new technology off the drawing board and into the hands of the Navy at a pace never seen before.

In the US, the Navy and Marine Corps aim to achieve “a seamlessly integrated manned/unmanned future force.” Its Unmanned Systems Roadmap talks about the integration of unmanned systems into almost every aspect of operations.

The US Navy has awarded a $43-million contract to Boeing for four of its Orca Extra-Large Unmanned Underwater Vehicles (XLUUVs). The Orca is based on Boeing's Echo Voyager, which is able to perform at sea for months at a time. Boeing says the 51-foot long Echo Voyager offers navies a more affordable, mission-capable solution over traditional UUVs.

According to US Naval Institute News, the US Navy is also exploring the possible use of Large Diameter Unmanned Underwater Vehicles (LDUUVs) as another rapid acquisition programme. The LDUUV could be launched from either a Virginia-class fast attack submarine or from a surface ship. LDUUVs could perform similar missions as the XLUUV. However, the LDUUV would need to remain relatively close to the mother ship instead of operating autonomously like the XLUUV.