The Turkish Navy's reinvigorated fleet of submarine rescue ships have made a number of key underwater discoveries since being launched. 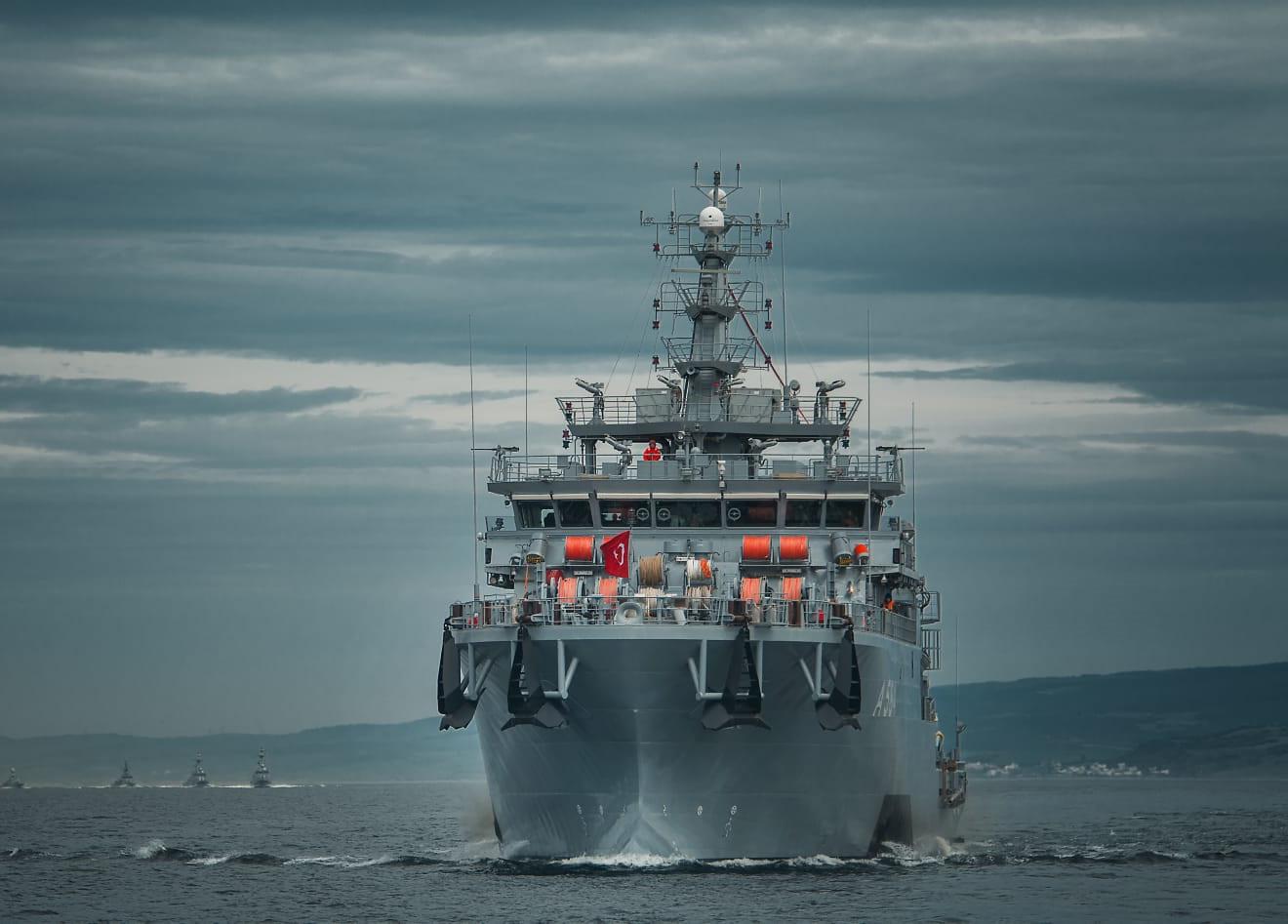 On 12 August 2000, the Russian Navy’s nuclear-powered Oscar class submarine, the Kursk was participating in the "Summer-X" exercise in the Barents Sea. During a torpedo loading drill an explosion occurred and sank the Kursk.

Some of the crew survived the initial explosion, but the Russian Navy was ill-equipped and lacked expertise to respond to the disaster. The Kursk was not located until 16 hours after the explosion and the first rescue vessel started operation 15 hours after that. Despite the relatively shallow waters, (108 meters) all 118 personnel on board lost their life.

The disaster has made countries aware of the importance of submarine rescue capabilities. One of the most significant developments has occurred in the Turkish Navy, which recently replaced its submarine rescue ships and equipment.

The Navy inducted one submarine rescue mother ship (TCG ALEMDAR) and two submarine rescue and towing ships (TCG IŞIN, TCG AKIN) into its fleet. The ships were built in Turkey with a 65%  domestic contribution. After commissioning new ships, the Turkish Navy started to draw attention to the underwater community with its underwater discoveries, operations and successful rescue exercises.

During one such exercise, a submarine from Hitler's Lost Fleet, U23, was found after 75 years. The wreck of a German U-class submarine that sank during World War II was found off the coast of Istanbul's Şile district in Februrary 2019.

The U-23 submarine was lying at a depth of 40 metres off the Black Sea coast, two nautical miles away from the shore when it was found by one of the Turkish submarine rescue and towing ships, TCG AKIN (A-584). The second ship of the same class, TCG IŞIN (A-583), discovered the wreck of Air France Flight 152 (Lockheed L-749A Constellation), which sank in the Mediterranean Sea on 3 August 1953. The wreck was found at a depth of 270 metres on February 2018.

TCG ALEMDAR, the other submarine rescue mother ship of the Turkish Navy, ended the 100 years of loneliness of the Ottoman Navy ship Midilli (formerly the German Breslau) which sank during the First World War. It lay near the sea port of Çanakkale in Turkey.  With its remotely operated vehicles and capabilities, TCG ALEMDAR conducted a commemoration ceremony at a depth of 73 metres. On  November 2017, the same vessel recovered  bodies from a commercial ship that sank in the Black Sea.

These ships also conducted several successful rescue drills in international and national submarine rescue exercises. In the last series of these exercises, KURTARAN 2019, TCG ALEMDAR successfully transferred two crew from a sunken submarine (simulated) at a depth of 75 metres. 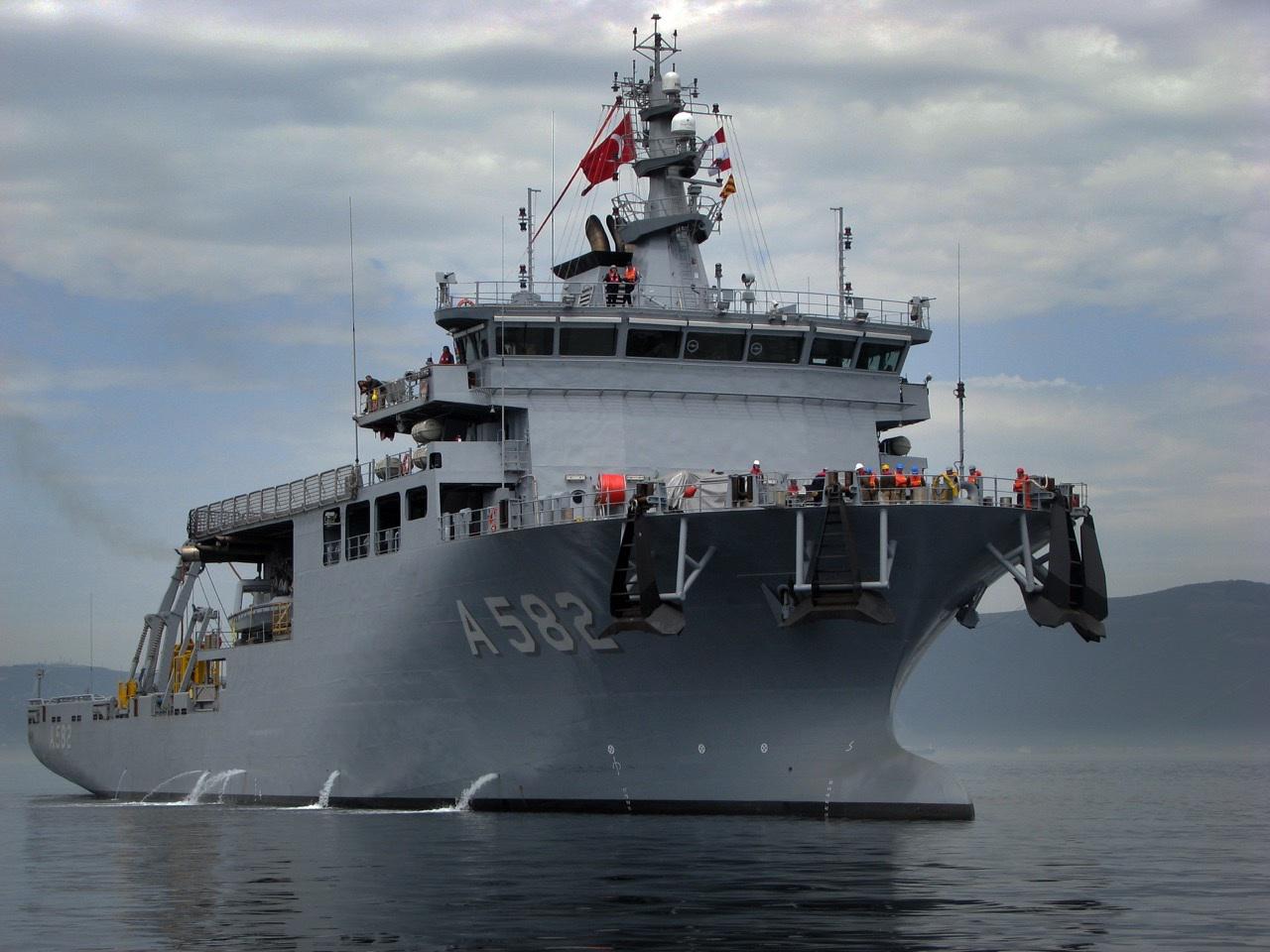 The building of the TCG ALEMDAR Submarine Rescue Mother Ship (MOSHIP) started in 2011. The vessel was built by Istanbul Shipyard and launched on April 29, 2014. TCG ALEMDAR A-582 was commissioned by the Turkish Navy in January 2017. She is a dedicated submarine rescue mother ship designed to perform subsea and surface search and rescue operations in various sea conditions. The vessel is equipped with a diesel-electric propulsion system allowing flexible power share and high qualified position keeping.

The MOSHIP  is capable of detecting distressed submarines, providing life support including ventilation and pod posting, evacuating her crew up to 600 metres of depth and transferring them under pressure up to 5 bar. The ventilation capability has been tested over a  depth of 600 m. The MOSHIP has a maximum continuous speed of 18 knots and an endurance range of 4500 nautical miles at an economical speed of 14 knots.

RATSHIP is capable of detecting distressed submarines, providing life support, including ventilation and pod posting, as well as additional auxiliary roles. RATSHIP has a maximum continuous speed of 18 knots and an endurance range of 4,500 nautical miles at an economical speed of 14 knots.

The capability matrix of the ships:

Kerem Demir is a journalist and defence industry analyst. He is the founder of the Turkish-based Naval News, an online naval news information portal. He also works as a consultant for Turkish defence companies and is an expert in modern naval warfare.