Are rainy days in store for Russia's Black Sea Fleet following the sinking of the Moskva?

With the sinking of the most powerful ship in Russia's Black Sea fleet, can Russia maintain its dominance of the Black Sea? 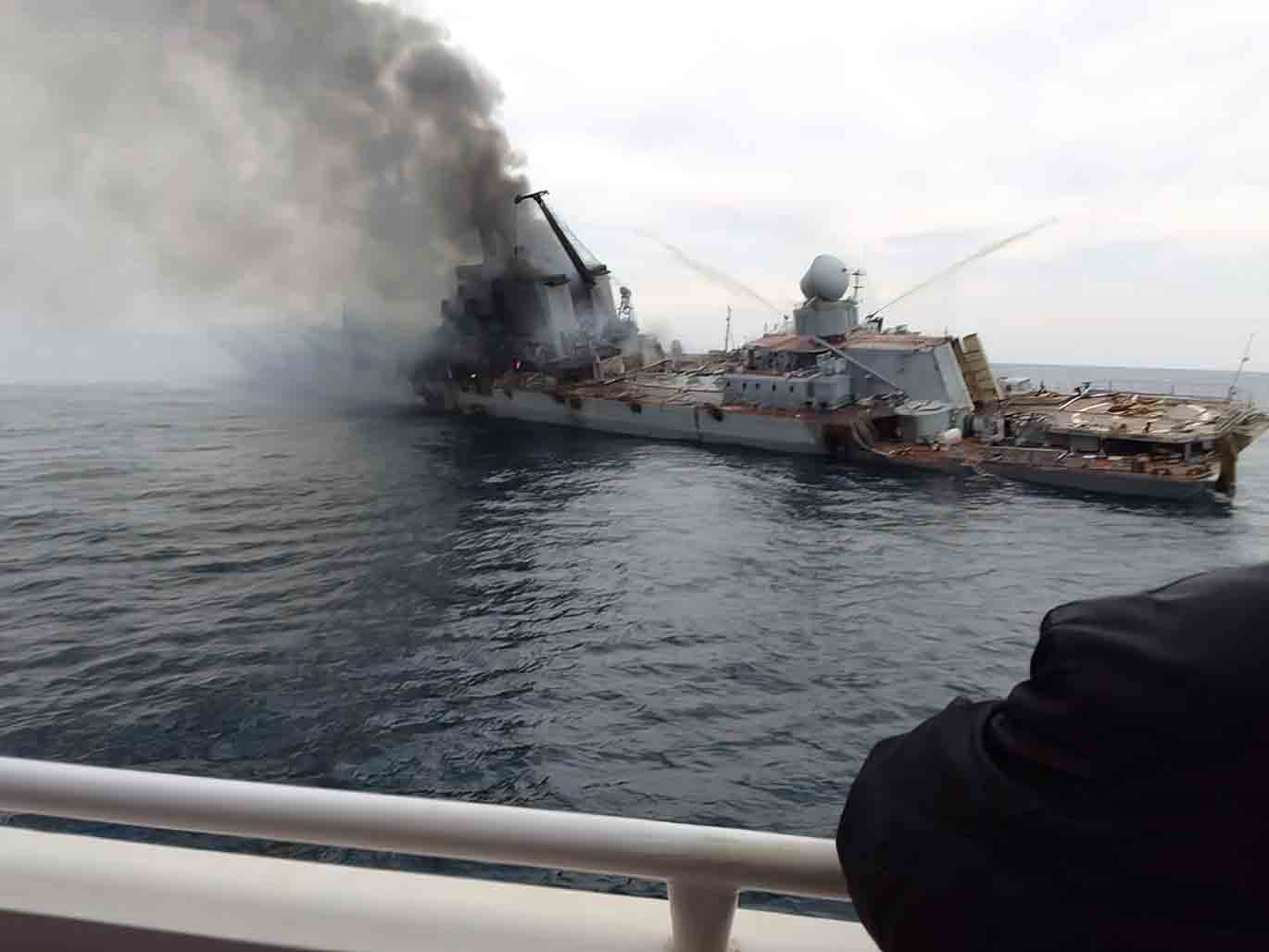 A photo of the Moskva sinking after it was reportedly hit by two Ukrainian missiles (Source: Unknown)

With the sinking of the Moskva, the most powerful ship in Russia's Black Sea fleet, can Russia maintain its dominance of the Black Sea, which it has controlled since the start of the war in Ukraine?

On April 13, the fleet's flagship, Slava-class Moskva cruiser, was reportedly hit with Neptune missiles fired by Ukrainian Armed Forces. The incident was reported by Russian media as a fire caused by the explosion of some munitions, and crew on board were said to have evacuated the ship. No official confirmation has been provided by Ukrainian officials of a missile attack on the vessel, but a Telegram message sent by the governor of Odesa Oblast suggested that the Russian guided-missile cruiser was attacked with Ukrainian-manufactured Neptune missiles.

Initially, the US Department of Defense believed the vessel had experienced an on-board explosion, but on the 15 April, a senior US defence official was quoted as supporting the uggestion that the warship had been struck by two Neptune missiles. The Neptune is a Ukrainian anti-ship cruise  missile developed by the Luch Design Bureau in Kyiv, which was established in 1965. The Neptune is based on the Soviet Kh-35 anti-ship missile and has similar operating principles to that of the Harpoon, but a longer range.

H.I.Sutton, a well-known OSINT analyst who has closely monitored naval activity in the Black Sea since the beginning of the war in Ukraine, says the attack on the Black Sea Fleet's most powerful ship demonstrates the importance of coastal anti-ship missile batteries in coastal defence. He says the presence of missile batteries on the coast will restrict the movements of the Russian fleet. "An anti-ship missile capability could deter the Russian Navy from the most audacious operations,” he says. “Currently, the Russian Navy faces minimal attack risk in most of the Black Sea. If the threat level increases, Russia will likely have to adjust its operations accordingly," he says.

But the sinking of the Moskva raises questions about why the vessel didn’t detect the incoming missiles? It is not common for large ships like the Moskva to be sunk by a few anti-ship missiles. However, the crew's perception that Ukraine did not have anti-ship missiles available may have prevented them from responding appropriately to the attack. This would appear to be the result of a failure in military intelligence.

In addition to its MR–800 air search radar with a range of 400 km, the Slava-class cruisers have top-dome, pop-group, bass-tilt and kite-screech tracking radars, as well as four rum-tub ESMs at various locations on the ship. With this sensor equipment, it should be possible to detect an active radar-seeking missile such as the Neptune, three-to-four minutes in advance and engage it with a surface-to-air missile (S300F and SA -N-8) or a AK 630 CIWS.

Inadequate reconnaissance, inability to defend against the missile, inadequate firefighting and damage control appear to have compounded the fate of the massive cruiser, which is reported to have had 500 crew members on board. It is unclear how many managed to escape the vessel before it sank.

What is the impact of losing the Moskva?

The Moskva was the flagship of Russia's Black Sea Fleet and bore the name of the country's capital city. Flagships have both tactical and psychological significance. As these ships have high-level command capabilities, their loss could diminish a fleet's command and control capabilities and functions, even if only temporarily, which can present issues in high-intensity operations. Because battleships are considered part of a country's territory, their loss can also have a huge psychological impact on both the crew on board and the general population.

The loss of the Moskva cruiser will have a psychological impact on the war. But as Ukraine lacks a naval force, Russia's maritime dominance is likely to remain. However, the sinking of the Moskva may have lessened the likelihood of Russia conducting an amphibious operation against Odessa as its firepower and command and control skills would be critical in aiding amphibious forces.

Since the beginning of Russia's invasion, its Black Sea Fleet has maintained naval control in the Black Sea, as Ukraine does not have adequate naval power, as well as coastal defense systems. Thus, the port of Odessa, through which 70% of Ukraine's exports pass, has been kept closed. The Russian Amphibious Task Group is on constant standby off the Ukrainian coast, preventing one or two brigades of the Ukrainian army from being deployed for coastal defence.

The locations of Russian surface units can be easily tracked using satellites, electronic reconnaissance, NATO AWACS aircraft, and US Global Hawks, allowing anti-ship cruise missiles to target Russian ships from long distances. This would give Ukraine some level of A2AD capability against the Russian Navy, and ease the current blockade of Odessa Harbor by surface ships.

Sutton says the key point is Russia's actual intention to take Odessa with an amphibious operation. "Russia could try to neutralize the launch pads. This capability could be particularly relevant if Russia is planning an actual amphibious landing or minesweeping operations for various purposes."

On the other hand, reinforcing Odessa's coastal defenses with anti-ship missiles would complicate any amphibious operation, which Russia has not yet conducted, and could allow Ukraine to move forces from Odessa to the Donbass region and reinforce them there.

In addition to its own Neptune missiles, the UK has also promised to supply Ukraine with anti-ship missiles. The pledge was made after UK Prime Minister Boris Johnson made an uannounced visit to Ukraine on the 9 April.

UK newspaper, The Daily Mail, claimed that the UK had agreed to supply Harpoon anti-ship missiles, in an effort to break the Russian Navy's siege of Black Sea ports. However, the UK Ministry of Defence didn't confirm the type of missile. The only information available so far is that 120 armoured vehicles and anti-ship missiles will be sent.

With its range of 75 nautical miles (~140 km), the combat-proven Harpoon anti-ship missile is a deterrent solution against Russia. However, this is a low-probability solution. Since the Harpoon coast-based variant is the only compatible solution for Ukraine, which lacks warships to deploy ship-based variants, open sources suggest that the UK does not have a Harpoon Coastal Defence System (HCDS) in its inventory.

Since the UK cannot provide HDCS to Ukraine, additional solutions are needed to fire the existing Harpoon missiles from the ground, which reduces the likelihood of this missile being deployed.

Some reports have suggested the UK Sea Spear missile, a naval variant of the MBDA Brimstone missile, could be sent to Ukraine. The air-launched version was used by the Royal Air Force in Afghanistan and Syria. The lightweight Brimstone standoff missiles are extremely accurate and can be mounted on fixed land installations. Compared to the Harpoon, the Sea Spear has a smaller anti-access area denial (A2/ AD) with a range of about 25 kilometres.

ABOUT THE AUTHOR: Tayfun Ozberk is a former naval officer and defence analyst based in Turkey.