Having suffered embarrassing losses to Ukraine, Russia's Navy needs to restore its reputation. Will a new maritime doctrine be its saviour? 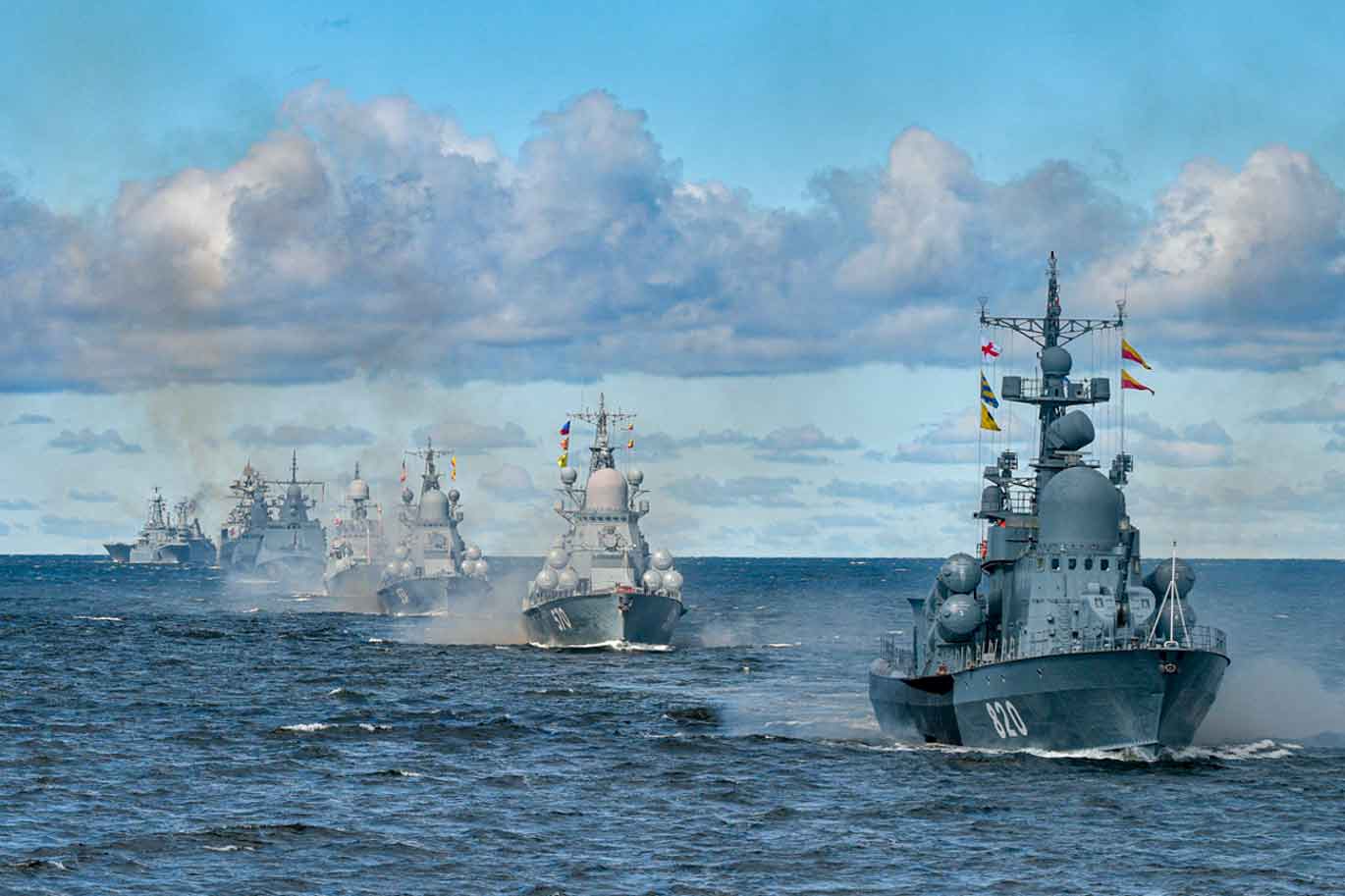 Russia Naval Day Parade 2020: Russia's Navy needs time, money and technology if it is to achieve its latest ambitions to connect the Arctic and Pacific Oceans to boost its status as a maritime power. (Photo: Russian MoD)

Against the backdrop of embarrassing losses suffered by its Black Sea Fleet in the war in Ukraine, Russia has updated its naval doctrine outlining ambitious plans for improving sea access and expanding its fleet. But given technological and budgetary constraints, can it fully realise its ambitions?

Russia’s prized Black Sea Fleet, which is charged with ensuring vital sea lines remain under Russian control and influence, has suffered major setbacks during its invasion of Ukraine. While the number of Russian ships destroyed is nowhere near the number of tanks, armoured vehicles and SAMs, damage and losses have been mounting in recent months, thanks to audacious attacks by Ukrainian UAVs, and crude naval drones, which are thought to have damaged the flagship of the Russian Black Sea Fleet, the Admiral Makarov.

The fact that the Black Sea Fleet's former flagship, the Moskva cruiser, was sunk by two Neptune anti-ship missiles fired from the Ukrainian coast on April 14 and that the Russian Navy withdrew from the geo-strategically important Snake Island off Odesa have only added to Russia’s maritime woes in Ukraine. These defeats are made even more remarkable by the fact that Ukraine doesn’t have a navy to speak of. It lost 80% of its vessels after the occupation of Crimea in 2014.

Russia’s maritime losses early in the war in Ukraine were enough to force Russian President Vladimir Putin to adopt a new Naval Doctrine during Navy Day on July 31 in St. Petersburg. Russia’s Naval Doctrine was last updated in the summer of 2015 following its illegal annexation of Ukraine's Crimean Peninsula. But after the war with Ukraine broke out, it was forced again to adjust its naval strategy to keep pace with the latest developments.

Following Ukraine's October 29 attack on Black Sea Fleet ships at the Sevastopol naval base using unmanned naval drones, Russia moved the location of its warships to Novorossiysk, one of the largest ports in the Black Sea, demonstrating that it is desperate to protect its warships against further attacks.

Sidharth Kaushal, a research fellow for Sea Power at the Royal United Services Institute (RUSI), says Russia’s latest maritime doctrine contains little that is fundamentally new in some areas. “The focus on NATO, for example, was already apparent in 2015,” he explains. “However, Russia's ability to resource its maritime ambitions and continue the production of capabilities like the Yasen submarine is likely to be constrained in an environment characterised by resource tradeoffs.”

Kaushal also underlined that there are some notable shifts — a focus on mobilization, and a great deal of space devoted to civilian infrastructure, for example. “This probably reflects the Russian hope that the NSR [Northern Sea Route] can be made a key artery through which energy can be sold to China, as the Russian market reorients eastward.”

Russia’s new maritime doctrine clarifies the fact that US control of the world's oceans poses the greatest threat to Russia's homeland, which has a 40,000-kilometer coastline. It also highlights Russia's economic and political maritime interests.

Despite its extensive maritime border and proximity to the sea, Russia lacks direct access to the open oceans. It lost much of its port infrastructure and access to trade routes when it lost its Soviet satellite states. Russia has identified its lack of sea access as a strategic weakness and recognizes the necessity for a strong naval programme to compensate. It also sees sea access as a chance to avoid economic strangulation and social isolation.

The new naval doctrine has a two-fold purpose. The first is a precise classification of maritime zones based on their significance to Russia. Russia's territorial waters, exclusive economic zone, continental shelf, Arctic basin, and Northern Sea Route, as well as the Sea of Azov and the Black Sea, the eastern section of the Mediterranean, the Baltic Sea, and the Kuril Strait, all have a direct impact on the country's economic development. The Black Sea and the Baltic Sea are Russia's primary ports, and Russia has declared that the presence of other countries' navies in these waters constitutes a direct threat, which its navy is prepared to respond to appropriately.

While the former naval doctrine was more centred on the Atlantic, Russia’s latest iteration is focused on the Arctic and Pacific Oceans. This demonstrates Russia's desire to connect the Arctic and Pacific Oceans to boost its status as a maritime power. Moscow sees the Northern Sea Route, between North Cape and the Bering Strait, as a means of retaining its global market competitiveness.

The policy also contemplates the creation of a shipbuilding complex, the construction of aircraft carriers, and the establishment of a liquefied natural gas plant in the Far East. It advocates for more active development of the continental shelf's natural resources, including increased geological knowledge of the Sea of Japan, the Sea of Okhotsk, and the Bering Sea.

Samuel Bendett, a research analyst with the Center for Naval Analyses International Affairs Group, says one of Russia’s priorities is increasing the volume of fundamental/applied scientific research related to the marine environment, including the study of Antarctica glaciers and Arctic islands off the coast and continental shelf of the Russian Federation, as well as modernisation of existing and construction of new research vessels. “Marine scientific research is aimed at obtaining systematic knowledge about the World Ocean, its biological productivity and mineral resources in the interests of sustainable development and strengthening Russia's national security," says Bendett.

But there are still questions as to whether Russia has the resources for such an expansive commitment given the ongoing war in Ukraine and the resources needed to sustain it.

“The doctrine calls for advanced digital technologies and platforms for ships, vessels and marine equipment; and the formation, development and implementation of priority technologies to develop promising weapons systems and special equipment,” Bendett adds.

For Russia's maritime plan to be successful, it must invest in the maritime sector and create cutting-edge technologies. First, it must establish a strong navy and merchant fleet. Russia’s shipbuilding development strategy, which runs until 2035, calls for the construction of 250 sea transport ships and more than 1,500 river-sea transport ships. The navy currently possesses approximately 70 submarines as well as more than 200 surface warships and boats (including a Soviet heavy aircraft carrier). While powerful, most of these surface ships are out of date, and many must be decommissioned.

The merchant fleet consists of only 1,400 Russian and foreign-flagged ships totaling 22.3 million tons. Surprisingly, the Russian fleet barely represents roughly 0.1% of worldwide cargo flow. Russia requires independent technologies to build up the fleet, but shipbuilding is heavily reliant on imports. Foreign components represent about 40% to 85% of the total civil sector.

Due to a lack of resources and outdated shipyards, repairing and building huge Soviet ships will prove difficult. Shipbuilders can only realise a portion of their ambitions due to their isolated financial status. One of the most serious risks to Russia's maritime activity is a lack of foreign bases to assist operations in far-flung and inaccessible places. Ultimately, Russia will require time, money, and technology to expand its naval presence.

While funding is the most pressing issue, the losses Russia’s Navy has suffered in Ukraine have highlighted significant deficiencies in other areas, such as operational readiness, logistics, leadership, and training. In particular, the fact that Ukraine was able to strike ships in Russia’s Black Sea Fleet in one of the safest places, the naval base of Sevastopol, shows that the navy has problems with the basics of naval warfare.

Given the recent casualties in this attack and those that preceded it, more than one doctrine is needed to address the problems that directly affect the fate of the war, such as training and logistics. But Kaushal believes the fundamental reason for these failures is low readiness. “As for the Black Sea fleet’s performance,” he says, “I would chalk its initial failures up to low readiness. The Moskva for example had its radar stowed when it was hit and had not received a much-needed refit that would have overhauled, among other things, its fire control systems.”

The losses in the Black Sea fleet don’t necessarily reflect a failure of doctrine, says Kaushal, but they do illustrate the difficulties Russia will face in generating capabilities to realise its ambitions. Perhaps the biggest loss for Russia’s Navy in the Russian-Ukraine War is its reputation. A change in doctrine can be considered a step towards healing it, but time will show how they apply the principles of doctrine in real operations to remedy its deterrence.

ABOUT THE AUTHOR: Tayfun Ozberk is a Turkish-based defence and naval analyst who writes about emerging technologies from a naval warfare perspective.

Are rainy days in store for Russia's Black Sea Fleet following the sinking of the Moskva? 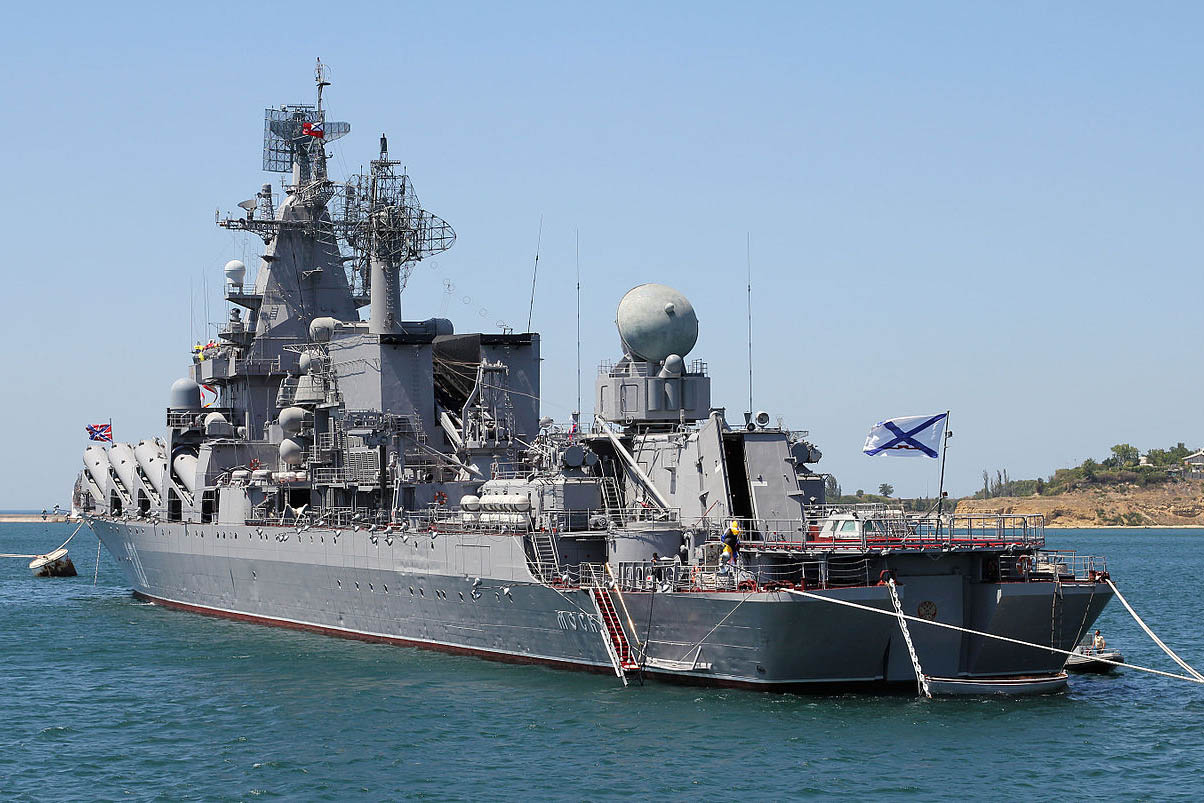