SMS-D from Kelvin Hughes, is designed to detect and track UAVs.

Radar specialists, Kelvin Hughes will launch a new drone detection system at the Home Office Security & Policing exhibition to be held at Farnborough in the UK in March.

The SMS-D is an integrated, medium-range, radar-based surveillance system designed for the detection and tracking of small aerial targets. It tracks the real-time position of aerial targets, including those that could be used to attack infrastructure, vehicles or individuals, as well as those that may be used for hostile observation or smuggling.

Based on the company’s solid-state SharpEye X-Band solid-state radar transceiver technology, Kelvin Hughes says the system can detect drones up to 1.5 km away.The SMS-D provides continuously updated bearing, distance, altitude and velocity data. The latest addition to the Kelvin Hughes SMS (Single Mast Solution) range, it identifies targets automatically through its video tracking system, ensuring that any remedial or defensive action can be implemented without delay.

The SMS is designed to accommodate a combination of radar, optical and thermal imaging devices to provide 360-degree surveillance of any site perimeter or border as well as providing early detection of any drones or other UAVs. The SMS can be fixed to a permanent structure or mounted on a vehicle to further extend the envelope of detection.

During the official launch at Security & Policing, Kelvin Hughes will demonstrate the SMS-D within the Live Immersive Experience, which will take visitors on a “journey through the Criminal Justice System.” The SMS-D will be located on a mock perimeter fence and linked to Kelvin Hughes’ CxEye control and display software which integrates data from multiple sensors into a single display. 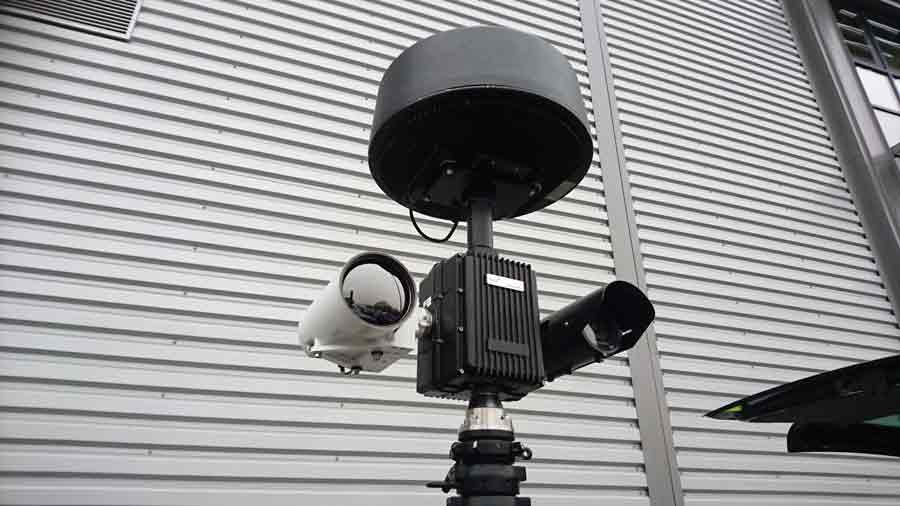 Jonathan Field, Security Systems and Sensors Director for Kelvin Hughes, said SMS-D is a fully integrated package of radar and electro-optical sensors and software providing a sophisticated yet highly cost-effective response to the increasing threat of drone incursion.

The counter-UAV market is tipped to be worth an estimated $1.1 billion by 2022. Whilst Kelvin Hughes’ solution is designed to be able to detect and track UAVs, other solutions such as the SkyWall 100 and the DroneDefender, are designed to forcibly land UAVs.

Last November, soldiers at the inaugural Army Warfighting Assessment (AWA 17.1) exercise at Fort Bliss, Texas, and White Sands Missile Range, New Mexico,  used Batelle's DroneDefender system to bring down a DJI Phantom UAV, which is marketed for civilian use. The DroneDefender can disrupt a UAV 400 metres away by emitting a laser signal that affects the UAV’s remote control and GPS.

The US Air Force is reportedly spending $15.6 million on Israel Aerospace Industries’ Drone Guard system, which combines radar and electro-optical sensors for detection and identification, defeating the UAV with its electronic jamming system. Drone Guard uses 3D radar and special drone detection and tracking algorithms, as well as electro-optical sensors for visual identification of the target.

Cambridge, UK-based Aveillant uses Holographic Radar, which illuminates the target all of the time (conventional radar systems only illuminate a target for some of the time) to detect, track and classify  all types of drone, from micro systems (a DJI Phantom UAV) upwards. Unlike most traditional scanning radars, Aveillant says its radar can provide full 3D position and velocity information, which allows for more accurate location of detected air targets.