Iran Responds To Killing of Revered Commander by US

US military bases in Iraq attacked as Iran retaliates for drone strike on General Soleimani. 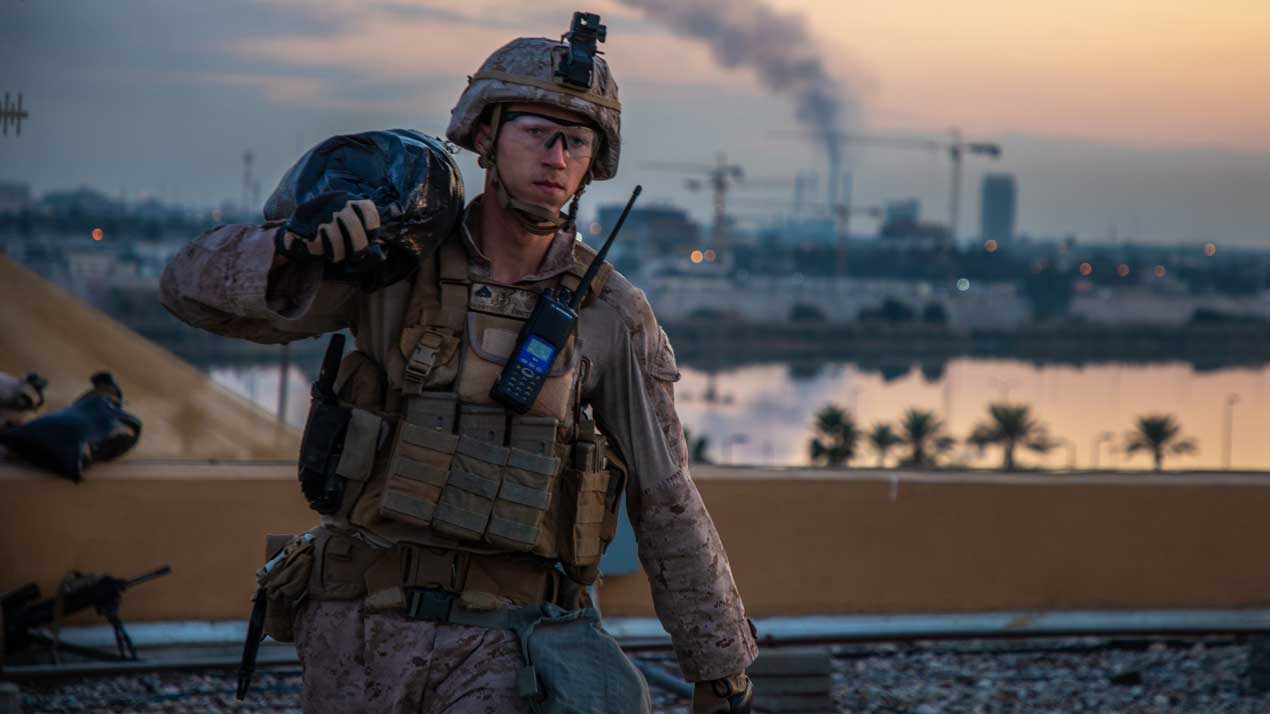 A US Marine with 2nd Battalion, 7th Marines, assigned to the Special Purpose Marine Air-Ground Task Force-Crisis Response-Central Command, carries a sand bag to strengthen a security post during the reinforcement of the Baghdad Embassy Compound in Iraq, Jan. 4, 2020  (US Marine Corps photo by Sgt. Kyle C. Talbot)

Iran's Islamic Revolution Guard Corps (IRGC) fired surface-to-surface missiles at two US airbases in western Iraq on Wednesday in retaliation for the assassination of General Qasem Soleimani. The missiles targeted the Ein al-Assad base, which is thought to be the largest and most equipped US base, and the Al-Taji base in Erbil. No casualties have been reported yet from the attacks.

According to the Islamic Republic News Agency, Iran's Foreign Minister Mohammad Javad Zarif described the attacks as a "proportionate measure."   Iran has warned the US, and its allies, that any new measures or acts of aggression would be met with an even harsher response. "Any country serving as the origin of bellicose and aggressive attacks in any form against the Islamic Republic of Iran" will be targeted, a report published by the IRNA astated.

Although the US supposedly acted alone when it decided to target General Soleimani, Iran said that it did not see Israel's “Zionist regime as separate from the criminal US regime.” It advised the US to recall its troops from the Middle East region to avoid any further damage.

There has been confusion as to the movement of US troops in Iraq since the strike on General Soleimani. A leaked memo suggested that US troops were leaving Iraq at the request of the government there, but chairman of the Joint Chiefs, General Mark Miller, later discounted those reports stating that the letter was a draft and its release was an "honest mistake."

In a statement US Central Command says that the US continues to deploy and reposition troops throughout Iraq and Iran to bolster US security and force protection and to be prepared for any contingency. US Army Paratroopers assigned to the 82nd Airborne Division and elements of the Immediate Response Force were deployed to the US Central Command area of operations early in the new year in response to increased threat levels against US personnel and facilities.

US Defense Secretary Mark Esper said no decision had been made for the US to leave Iraq. He reemphasized the US's commitment to defeating ISIS and noted the escalation of attacks by Iranian and proxy groups attacking US forces.

A report on the IRGC news site, Mashreg, stated that the US has military bases in Baghdad, Al-Anbar, Duhok, Erbil, Kirkuk, Ninawa and Salah al-Din provinces, as well as what it called “a number of secret training bases in other parts of Iraq.”

Researchers and analysts at the International Institute for Strategic Studies in London say Iran's response is likely to be relative to the iconic status that Soleimani held.  However, they said Iran must now factor in the US's clear demonstration of resolve.

It says there is a risk of demonstrations of defiance and capability made in sympathy with, but not orchestrated by, Tehran – especially from key partners such as Hizbullah and Ansarullah (the Houthis). IISS researchers say both groups were key beneficiaries of Soleimani’s policies.  “In his absence they may, ironically, act more freely than they would have done had he been there to restrain them,” said researchers.

The networks of influence that General Soleimani builtin the Middle East are bigger than him, say analysts. “These networks allow command, control and communication across the region that will be an enabler for whatever retaliation Tehran decides to effect."

Analysts believe Iran is likely to use its networks throughout the region to contest the US presence wherever it can. But this strategy is likely to be carried out over time and presented as a narrative of continuous pressure on the US.  With General Soleimani no longer at the helm, the Iranian response will be deliberate rather than 'showy', says IISS analysts.

Despite “significant handicaps” to its conventional military capabilities due to international sanctions, in its The Military Balance publication, the IISS states that Iran can draw on asymmetric and other strategies. “Through the IRGC, Iran exerts significant military influence via a range of regional allies and proxies,” which it describes as a form of expeditionary capability. It also points to Iran's ballistic-missile inventory and ties with Russia and China, which are potentially major suppliers of defence equipment  to Iran.

Iran is believed to have procured Russia's S-300PMU2 (SA-20 Gargoyle) long-range surface-to-air missile system. The country also has what the IISS describes as a “well-developed defence-industrial base”, with key sectors such as missiles and guided weapons being developed indigenously.

Photo on homepage from the Islamic Republic News Agency