Protector Achieves Major Milestone Ahead of First Delivery Next Year 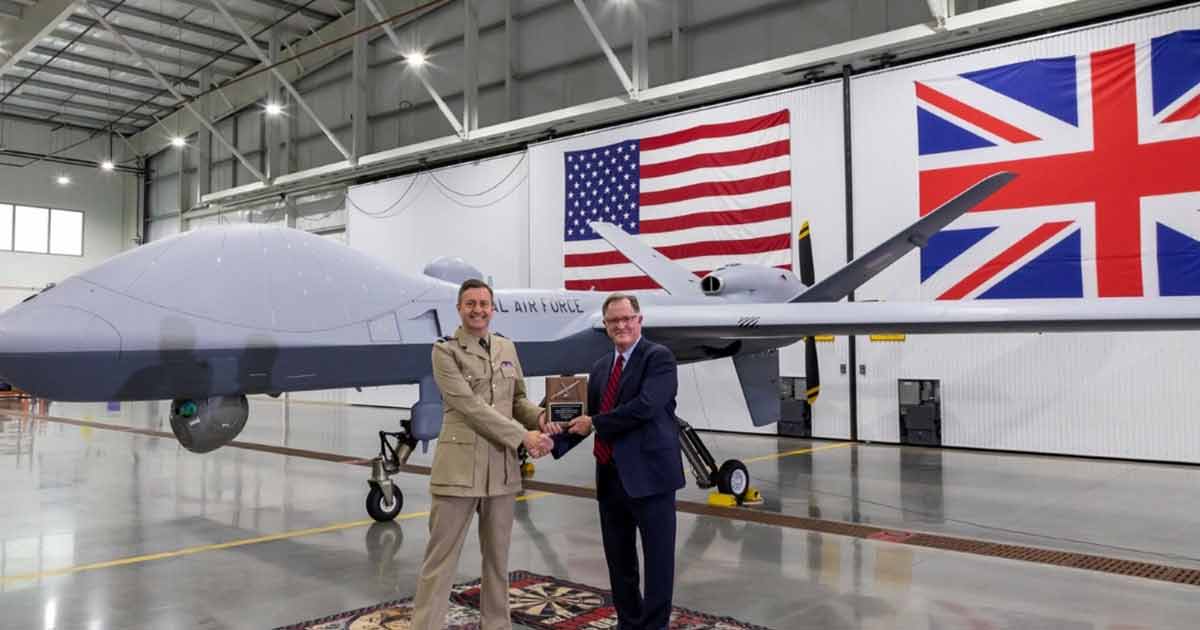 The handover, which took place last month, according to a post on the RAF’s website, followed the successful conclusion of the Acceptance Test Procedure performed jointly by the Ministry of Defence and GA-ASI.

The aircraft was accepted by Air Vice Marshal Simon Ellard, Director Combat Air at Defence Equipment and Support (DE&S), the procurement arm of the UK Ministry of Defence. “We now look forward to the first delivery of this highly capable aircraft type to RAF Waddington during 2023,” he said.

Ownership of the aircraft has now been transferred to the UK MOD, but the RPAS will remain in the US to participate in the initial training programme for the RAF, which will see RAF technicians learn how to maintain the capability, prior to the arrival of the first aircraft in the UK in 2023.

Acceptance Test Procedures (ATP) of the aircraft were performed at GA-ASI’s Desert Horizon flight operations facility in El Mirage, California. ATP was performed jointly by the UK Ministry of Defence and GA-ASI following the completion of the aircraft production and acceptance procedures.

All inspections and tests were performed on the hardware in operation for the aircraft and in conformance with the functional specification and technical requirements.

ATP was also completed on the first two sets of Portable Pre-flight and Post-flight Equipment (P3Es). P3E is a laptop size ground support equipment that enables SATCOM Automatic Taxi, Takeoff and Landing Capability from anywhere in the world greatly reducing the personnel and equipment fielding footprint.

The Protector MK1 is the long-awaited replacement for the RAF’s MQ-9 Reaper RPAS, which was used extensively in theatres such as Afghanistan.

While Reaper was restricted to flying missions from remote air bases and theatres of operation under military airspace control, the Protector Mk1, which is based on a variant of GA-ASI’s MQ-9B SkyGuardian, will be the first Medium-Altitude Long Endurance (MALE) RPAS certified to fly in non-segregated civilian airspace.

But it hasn’t all been plain sailing for the Protector programme, which has been plagued by long delays (28 months) and cost overruns. A June 2021 report by the UK’s National Audit Office observed that Protector had seen the largest cost increases out of all the MOD’s major equipment programmes since approval.

“The single largest element of the forecast cost increase for Protector was the decision to defer the programme for short-term affordability reasons, and not due to contract management issues,” the NAO stated in its report.

The decision to delay the programme due to budgetary constraints also impacted Protector’s Initial Operating Capability, which was originally scheduled for July 2021, but is now expected in November 2023. That two-year delay had a knock-on effect in terms of requiring an extension of the Reaper RPAS at an additional cost of £50 million.

UK Defence Secretary Ben Wallace signed a £65m contract to build the UK’s first three Protector aircraft back in 2020. An additional order worth £195 million was placed for a further 13 Protector RPAS in 2021.