Arnold Defense is experimenting with integrating its FLETCHER laser-guided rocket system on a UGV. 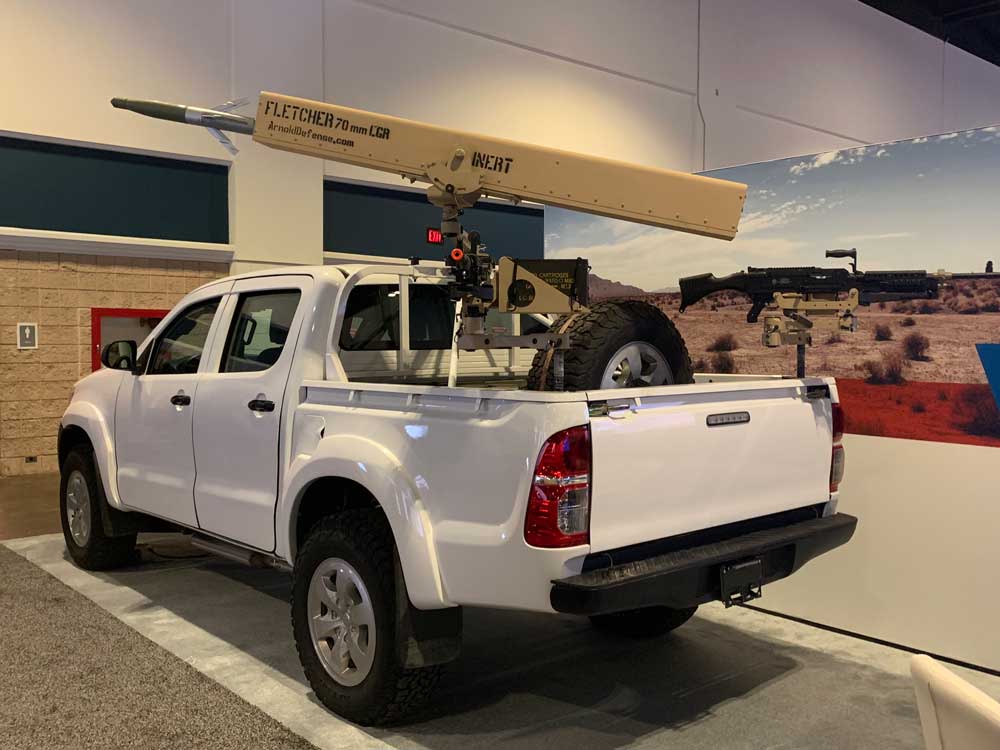 The FLETCHER system, first unveiled in 2017 at DSEI in London, has since undergone highly successful test-firing and with a first customer order now secured, Arnold has commenced initial low-rate production.

With FLETCHER, Arnold Defense has extended the utility of their proven, highly capable rocket launcher from aviation platforms into the land environment.  Using advanced rocket-guidance technology to meet the modern demands of land-based, mounted and dismounted asymmetric warfare, FLETCHER has been optimised for use by both special and conventional forces to provide surface-to-surface precision effect.

The wider concepts now being explored further expand FLETCHER’s utility into the arena of Unmanned Ground Vehicles (UGV), naval and littoral platforms. The ability to mount FLETCHER on a UGV will offer ground forces the capability to remotely support base or mobile defensive operations; giving wider scope for the tactical siting of remotely operated, laser-guided weapon systems, whilst significantly minimising exposure and risk to ground-based troops.

FLETCHER can also be mounted on naval/littoral platforms to give maritime troops a precision weapon system with a range of up to 5 km that can be deployed and operated at a tactical level.

Jim Hager, President and CEO of Arnold Defense said “Since launching FLETCHER, Arnold Defense has exhibited the system widely on the international market, where it has garnered significant interest world-wide, especially from special operations units.  Our rocket launchers are already internationally well-established on airborne platforms, so transitioning into the land and marine environments with FLETCHER is a natural progression”. He added: “We recently announced the receipt of our first customer order for FLETCHER and we’re talking to a significant number of other users who we’re expecting to also place orders in the coming months. SOFIC is an ideal event to meet yet more potential buyers."