Modularity is the most important thing for us, says BAE, as it unveils OMFV design. 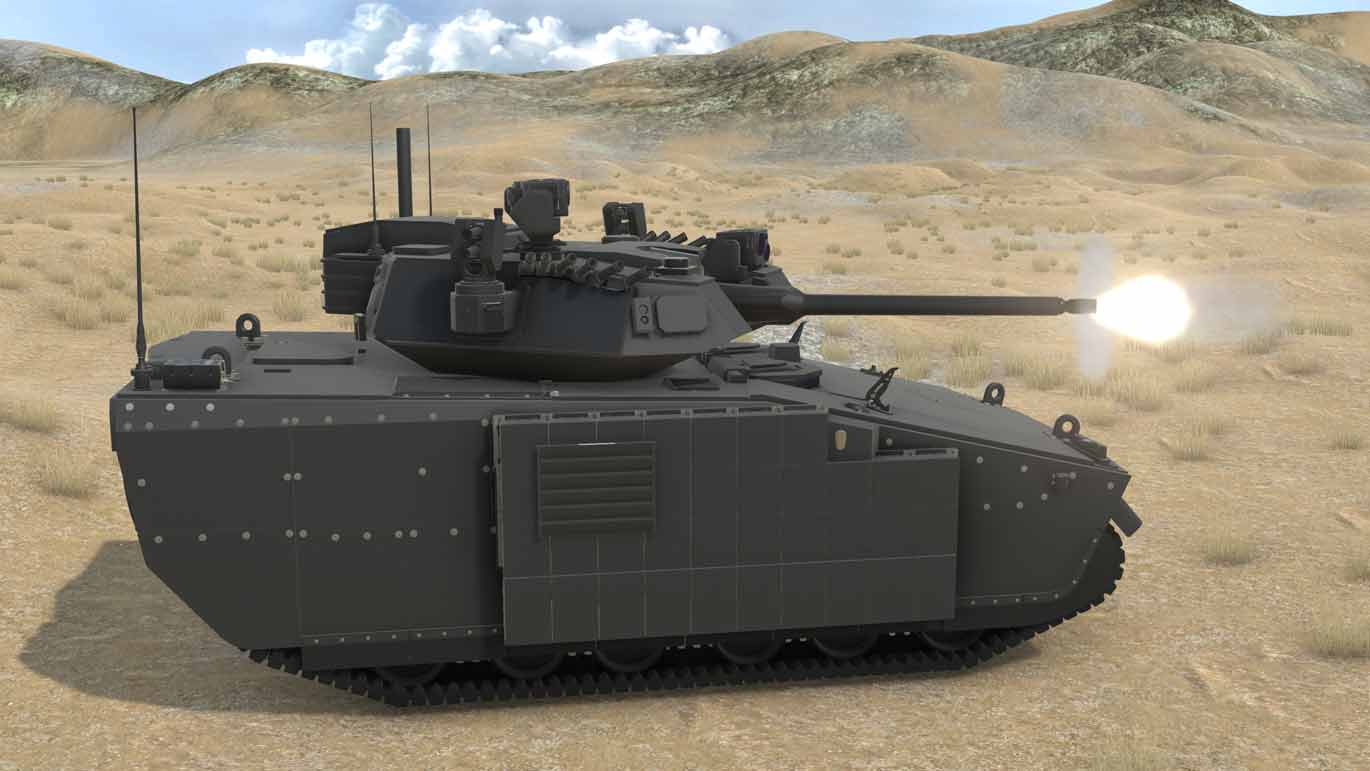 In unveiling its design for the US Army’s Optionally Manned Fighting Vehicle, BAE Systems said the war in Ukraine had forced it to make some modifications to its design.

While most armoured vehicle manufacturers had taken armour off the top of vehicles in recent years to reduce weight, Jim Miller, vice president of business development at BAE Systems said its design for the OMFV featured modular armour to protect against top attacks. Miller admitted this was a tweak it later made to the design having seen armoured vehicles in Ukraine being attacked from the top by anti-tank missiles and UAVs.

BAE Systems is teaming with Elbit Systems of America, Curtiss-Wright and QinetiQ on its design for the US Army’s Optionally Manned Fighting Vehicle (OMFV), which will replace the M2 Bradley Infantry Fighting Vehicle. BAE is the original OEM for the Bradley IFV.  “We’ve brought the best and brightest together,” said Miller, adding that a few on the team were also veterans. “We take this opportunity very seriously and know why it’s important to get it right."

For OMFV, Elbit is providing its 50mm Unmanned Turret (UT50), with multiple mission payloads and capabilities, which recently completed a successful live fire demonstration at the Aberdeen Test Center. The UT50 features a XM913 50mm cannon and a high-capacity ammunition handling system.

BAE System’s vehicle design is powered by a series hybrid electric drive (HED) system from QinetiQ, which Miller said provides an additional 700 kilowatts of power growth, which could provide additional power onboard the vehicle should the Army decide they want to add laser weapon systems for counter-UAS. Counter-UAS is currently not part of the Army’s requirement for the OMFV.

“We believe the time is now to go to Hybrid Electric Drive,” said Miller, adding that the Hybrid Electric Drive System on board its OMFV gives operators nine hours of silent watch and 2.5km of silent manoeuvre. QinetiQ’s Modular E-X-Drive® transmission has been tested and proven in a wide range of tracked vehicles and weight classes over the last decade. The system has been custom designed for BAE System’s OMFV.

The non-linear drive system means there is no engine up the front of the vehicle and the distributed drivetrain has been designed specifically for signature management. “One of the advantages of the series HED system,” said Miller,” is that it gives you the ability to choose where you put the heat generating aspects of the vehicle. We’ve put it on the sponsons. When it comes to electronic signature management, we’ve also reduced that so the vehicle can’t be found electronically.”

In addition to more power on the vehicle itself, for different types of weapon systems, Mike Sewart, group chief technology officer at QinetiQ said the series HED also reduced operating and fuel costs. “We’ve completely replaced the old transmission system and gearbox with the E-X-Drive solution, which can be powered by a generator, battery, or hydrogen fuel cell if required in future.

HED is not a specific requirement of the Army, but it is emerging as a key design component for the OMFV program, largely because of the benefits it offers in terms of silent watch and vehicle sustainability on the battlefield. BAE Systems sees its series HED, which is different from parallel HED systems, as a key differentiator.

A lot of emphasis has also been placed in the design on modularity. BAE System's OMFV design will use a standardized, Modular Open Systems Architecture (MOSA), designed by BAE Systems and Curtiss-Wright Defense Solutions. “Pretty much everything on board the vehicle is modular,” said Miller. “Modularity is the most important thing for us.  We don’t want the Army to be constrained by existing design or unable to grow.”

“The Army said they want increased mobility, deployability, they don’t want a huge vehicle,” said Miller. “That’s why we opted for a modular design, so they can move to a smaller scale vehicle if they want to.”

Weighing in at around 50 tons, BAE Systems’ OMFV will be operated by a two-person crew, it features common controls for a driver and commander who can switch roles. The vehicle also features AI for target recognition to help the two-man crew do their job.  “You can’t do a two-man crew without AI," said Miller. "The use of AI in the vehicle is fairly substantial compared to your standard IFV. There is space to grow it even further as the Army gets more comfortable with it.”