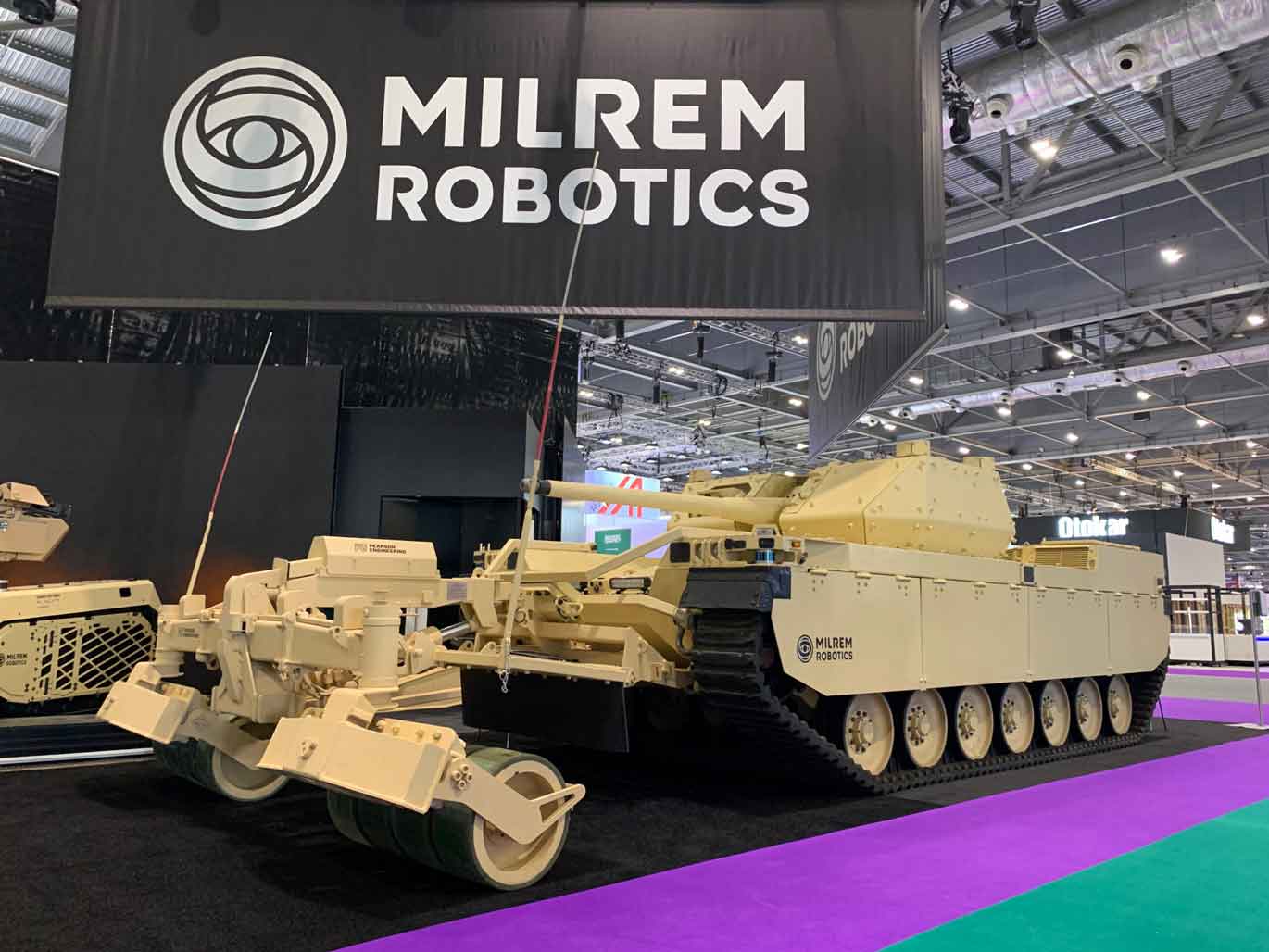 Milrem Robotics' Type-X Robotic Combat Vehicle (RCV) will be showcased with a Self-Protection Roller at DSEI 2021 from the 14-17 September at London's Excel Centre.

The integration of the Light Weight Mine Roller (a type of roller designed for self-protection) from British company, Pearson Engineering, to Milrem's Type X at DSEI is just one example of how unmanned vehicles could be used on the battlefield in future.

Equipment to support minefield breaching, route clearance, obstacle reduction, recovery and gap crossing could also be integrated, and some of this has already been proved possible during trials in the United States with the Remote Control Assault Breacher Vehicle (R-ABV).

The Light Weight Mine Roller will be integrated via a Pearson Engineering Vehicle Integration Kit. This allows the Type-X to easily accept a number of different types of front-end equipment, including dozer blades, equipment for the clearance of surface laid mines and for assault gap crossing.

Pearson Engineering and Milrem Robotics are also exploring options for the THeMIS Unmanned Ground Vehicle (UGV). The multi-role UGV has been operationally proven on exercises and has already been acquired by 11 countries, including 7 NATO members.

In future conflicts, RCVs could progressively take humans away from “dumb, dangerous and dirty’ tasks and afford skilled personnel the time and safety to outwit adversaries. “How RCVs will be deployed is still a matter of discussion with a trend towards lighter, nimbler, and more multi-purpose vehicles able to undertake a multitude of roles independently,” said Jason Riby, Engineering Director at Pearson Engineering.

“The fact remains, that these vehicles will need to move to places of their Commander’s choosing and in doing so, will need to defeat the wide range of natural and deliberate obstacles usually encountered on the battlefield. An RCV without protection may still be subject to enemy action, if not to injure soldiers, but to stop valuable assets in their tracks.”

The Type-X RCV is designed to be a wingman for manned IFVs and MBTs and can have many different roles on the battlefield, said Kuldar Väärsi, CEO of Milrem Robotics. “Combining it with excellent protection and route proving technologies from Pearson Engineering will significantly increase the survivability of not only the Type-X, but also of manned units. The future battlefield is about manned-unmanned teaming, and the task of the industry is to provide clever solutions for capability building,” Väärsi added.

The Type-X RCV is equipped with intelligent functions such as follow-me, waypoint navigation and obstacle detection.

The vehicle’s maximum speed is 80 km/h on paved roads and 50 km/h off-road. The vehicle has a weight of 12 tons.

The highly mobile, unmanned C-UAS systems can carry payloads from 7.62 to 30 mm including the Northrop Grumman M230 cannon and Thales LMM missiles. It can also find and engage larger air threats as well as ground targets, even if armoured. All without the operator being exposed to the threats.

“The autonomous nature of the system enables the operator to Sense, Identify, Decide and Effect over a wide area without placing the operator in areas of undue risk,” said Russell Gregory, Head of Strategy, Industrial Relations and Market Development at MSI-DSL. “In recent conflicts there has been an increase in the usage of drones and loitering munitions against various military targets. The employment of this type of equipment has made low-level conflicts more lethal.”

The first jointly developed C-UAV system is on display at DSEI 2021 in London 14-17 September at Milrem Robotics’ stand  H4-122.