US Army and Marine Corps to trial PowerWalk Exoskeleton

Wearable technology is designed to harvest power through the action of walking.

From next year, the US Army and Marine Corps will trial wearable technology for powering batteries. With soldiers carrying batteries that can add approximately 7 kg to their already heavy 41 kg load,  lightening the weight your typical infantry soldier carries is an ongoing focus of future soldier programmes worldwide.

Bionic Power developed PowerWalk, a light-weight, leg-mounted exoskeleton designed to accommodate a soldier’s full range of motion and harvest energy from the natural action of walking, in much the same way regenerative braking works in hybrid cars.

According to Bionic Power,  wearing a harvester on each leg, users are able to produce an average of 10 to 12 watts of electricity which, over the course of  an hour-long walk, can charge up to four smart phones. The walk-recharge capability  of the PowerWalk reduces the requirement for soldiers to carry backup batteries, as well as the need for battery resupply in the field, the Vancouver-based company says. 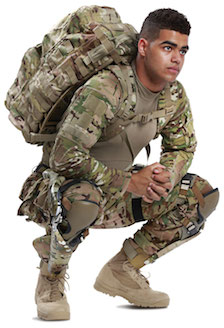 “A soldier typically carries 16-20 lbs [7 kg to 9 kg] in batteries on a 72-hour mission,” says Noel Soto, US Army Systems Engineer at the Natick Soldier Research, Development and Engineering Center. “If a soldier can generate power with wearable energy-harvesting devices, it means we can not only reduce the weight on his or her back, we also minimise the unit’s reliance on field resupply, making it possible for us to extend the duration and effectiveness of a mission.”

Bionic Power has received a contract valued at $1.25 million from the Office of the Secretary of Defense to supply low-volume production units of its PowerWalk® Kinetic Energy Harvester for field trials under the Joint Infantry Company Prototype (JIC-P) Program. This contract is in addition to Bionic Power’s existing contracts with the US Army. The JIC-P program aims to develop and test a system to provide power for dismounted infantry in order to reduce logistics resupply challenges and increase self-sustainability. Joint testing of Bionic Power’s PowerWalk device under the new contract will begin with the Marine Corps and the Army in early to mid-2017.

“Field trials play a crucial role in helping us determine future small unit power programmess for both the Marine Corps and the Army,” says Eric South, Naval Surface Warfare Center Dahlgren Division (NSWCDD) technical lead for JIC-P. “We need data and direct feedback from base exercises in order to develop the technologies and systems that will get our troops to power independence, the point at which they are generating and managing as much power as they are consuming.”