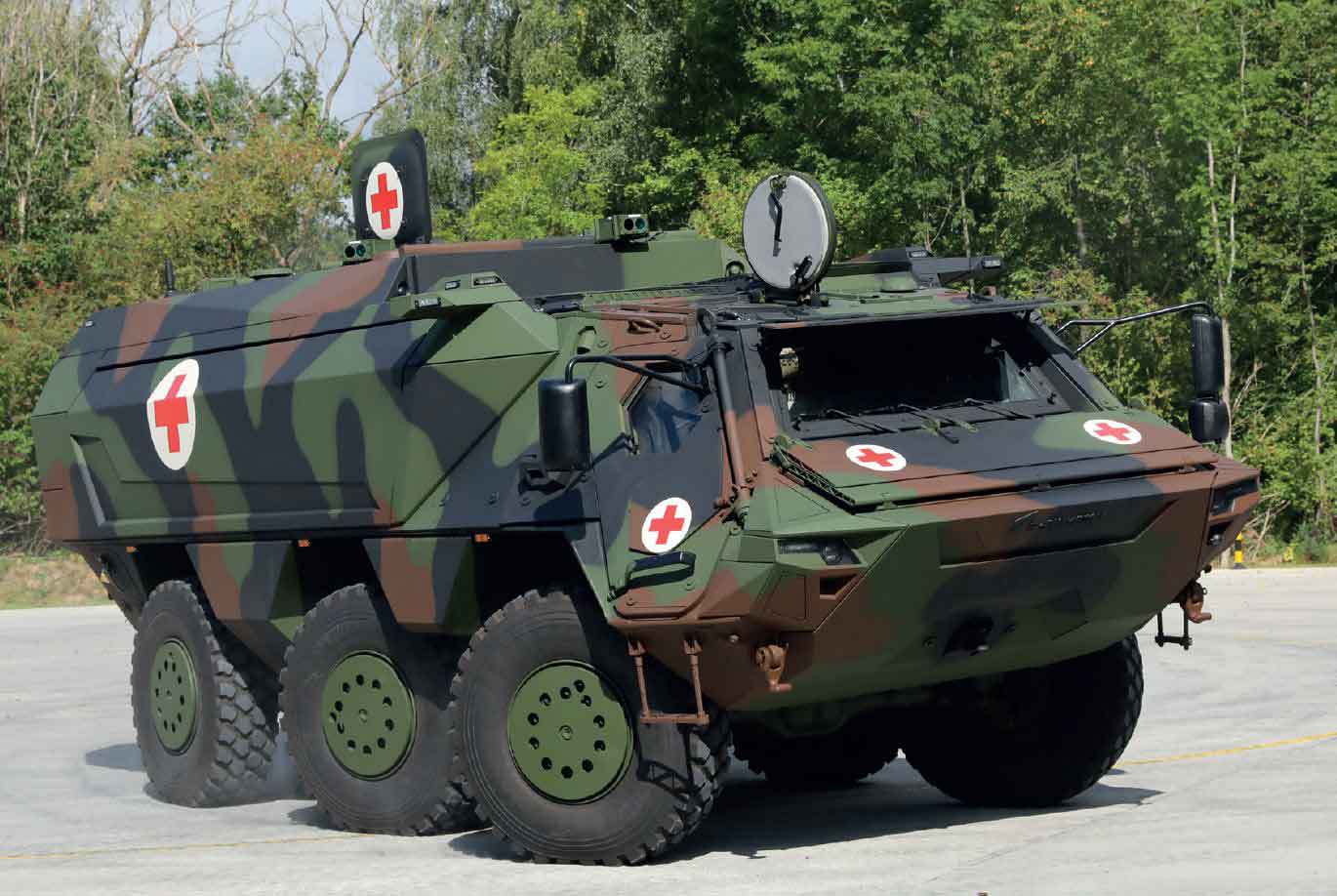 Rheinmetall has developed a new version of the Fuchs/Fox wheeled armoured transport vehicle, which can serve in roles ranging from tactical operations centre to armoured field ambulance.

Designed for maximum mobility, the new high-roof version of the Fuchs/Fox will be presented by Rheinmetall in a demonstrator configuration of the armoured field ambulance on 14-15 October 2021 at the Congress of the Gesellschaft für Wehrmedizin und Wehrpharmazie, a German NGO dedicated to military medicine and military pharmaceuticals, which takes place in the Rhein-Mosel-Halle convention centre in Koblenz.

The interior volume of the new high-roof version now measures twelve cubic metres, with headroom increased to 1.6 metres from the previous 1.26 metres. The armoured field ambulance version of the new high-roofed Fuchs/Fox can carry four wounded personnel, two lying down and two seated. Furthermore, the vehicle is equipped with an advanced 360-degree panoramic vision system.

Featuring fusion and a daytime/night-time capability, it is identical to the system used in the Puma infantry fighting vehicle. This substantially enhances the crew’s situational awareness. A NATO Generic Vehicle Architecture-conformant connection to additional sensors or weapons station is possible, as is the use of virtual reality goggles, which enable the crew to “see” through the armour.

In a manner analogous to the Puma, the Fuchs/Fox is also able to communicate with dismounted forces, including medics in this case, who are equipped with a special variant of the Future Soldier – Expanded System (IdZ-ES) soldier system. Thanks to uniform command-and-control technology, “Future Medics” will have access to the same situation information as the troops they support.

Moreover, the modernized Fuchs/Fox features a new, more powerful engine, a new transfer case, a new brake system and a digital electrical system. According to Rheinmetall, all these things improve the vehicle’s off-road performance and make it easier to operate.

The high-roof Fuchs/Fox demonstrator was developed at Rheinmetall Landsysteme in Kassel in the German state of Hesse, the vehicle’s birthplace. Numerous variants of the Fuchs/Fox armoured transport vehicle have formed part of the Bundeswehr inventory since 1979, with over 100 deployed in Afghanistan.

To date, some 1,600 Fuchs/Fox vehicles have been built. Today the armed forces of numerous nations place their trust in multiple variants of this system, including armoured personnel carriers, mobile command posts and vehicles specially configured for a Nuclear, Biological and Chemical detection role.