Babcock says it was challenged by the deadlines and fixed cost of the Type31e. 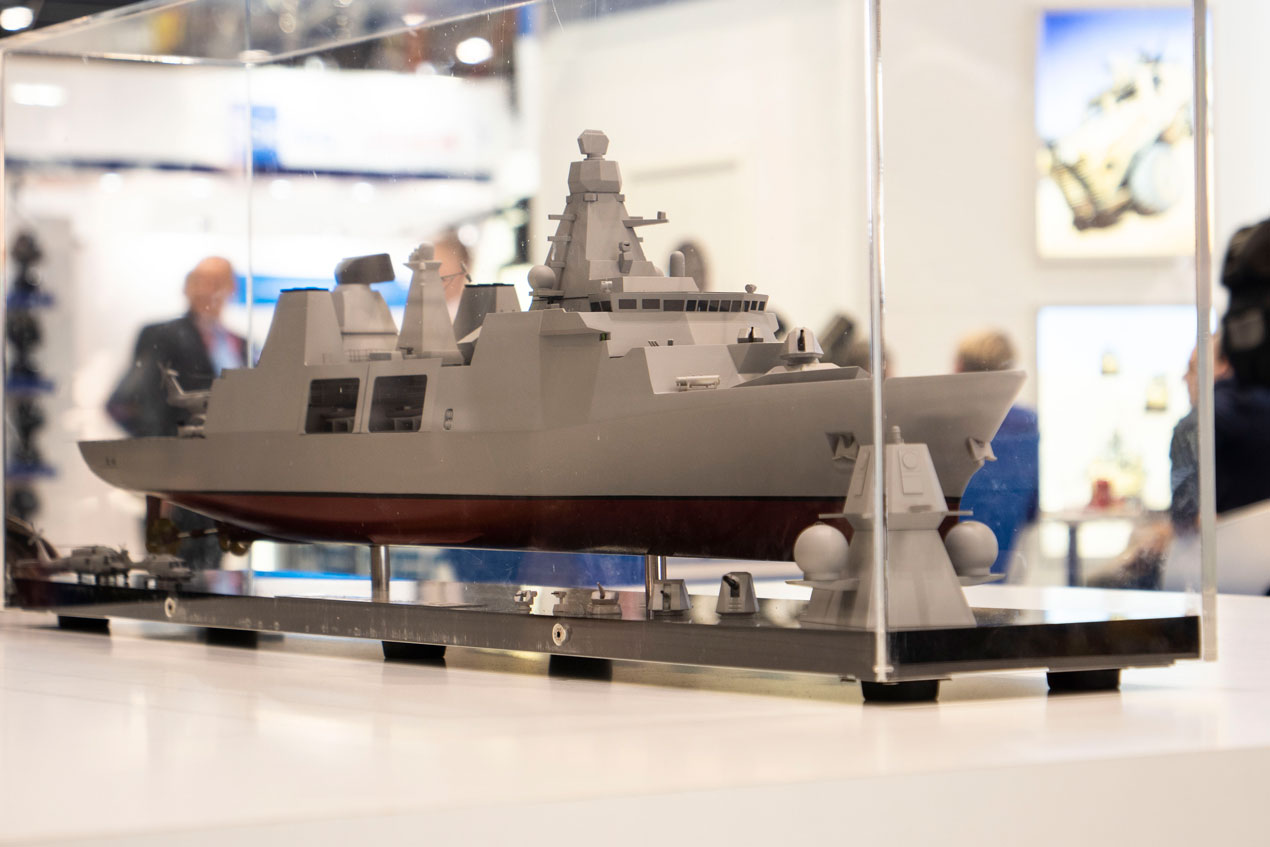 The Arrowhead design on display at DSEI 2019 in London

John Howie MBE, chief executive of Babcock Marine, which was selected as the preferred bidder for the Royal Navy’s Type 31e general-purpose frigate, said working on the programme had been challenging given the short timescales and the fixed-price nature of the procurement.

Howie said the UK Ministry of Defence had been a challenging customer during the process, but they had kept to the timescales given. “It’s been interesting working with the MoD on this,” he told DPI. “They’ve managed this procurement quite differently. It’s been a really constructive process, they’ve challenged us here, but every customer should and they’ve kept to the timescale that we set.”

The T31e General Purpose Frigate programme will provide the UK Government with a fleet of five ships, at a fixed production cost of £250 million per ship.  It was announced in the 2015 Strategic Defence and Security Review as a means to supply the Royal Navy with five general-purpose frigates when the first Type 23 frigates leave service in 2023.

But throughout its short life, the Type 31e has been dogged by controversy with various analysts questioning whether a capable combat ship can be procured for £250 million per vessel. Cost concerns resulted in the programme being temporarily suspended during 2018. It was only restarted when it was made clear that equipment taken from the existing Type 23s could be excluded from the price cap.

Last week at DSEI in London, Babcock's Arrowhead 140 proposal was named as the  preferred design out of three bids for the Type 31e. Babcock's solution in partnership with OMT of Denmark, is based on the Danish Iver Huitfeldt-class frigate with a Thales combat management system.  As part of its initial “Team 31” bid, Babcock said it would spread construction around the UK with modules built by Harland and Wolff in Belfast and Ferguson Marine in Glasgow, before being shipped to Rosyth, Fife, for final assembly.

With studies for a new high-end anti-submarine warfare frigate dating back to the mid-1990s, the Type 26 has been subject to years of delay with the first of class beginning construction in 2017 and not scheduled to enter service until around 2027. This is in contrast to the MoD's demanding schedule for the Type 31e, which  calls for the first ship to be launched in 2023, with the others joining the fleet at a rate of one per year after this.

Howie stressed the importance of building a really strong relationship and having a really clear route to meeting customer requirements. “The really big thing for us is building on the lessons of the aircraft carrier programme,” he said. “That is one of the most fabulous projects any of us will ever be involved in and there are many positive lessons that have come out of that.”

Babcock, working with Thales beat off rival bids from BAE Systems, who partnered with Cammell Laird (which offered the Leander, a "stretched Al Khareef corvette") and Atlas Elektronik UK, who offered an undisclosed design, believed to have been based on the MEKO A-200.

“[The Type 31e] is clearly not designed to be a high-end war fighting platform like the Type 26,” said Howie, “but neither is it a commercial ship painted grey. This is a proper warship with a proper weapons fit.”

Alongside the Thales TACTICOS Combat Management System, he confirmed that the gun and other key weapons fits had been decided, but declined to specify what they were.

One of the reasons the MoD instigated the Type 31e was to reinvigorate UK shipbuilding with a vessel cheaper than the Type 26 that would be attractive to export customers.

The high-end Type 26 has already been selected by Australia and Canada while the Type 31e is struggling to attract exports in a crowded low-end warship field. As Babcock's Type 31e design is derived from Denmark’s Iver Huitfeldt, questions persist over how intellectual property will affect export prospects.

The programme was also a centrepiece of the National Shipbuilding Strategy, which recommended building of ship blocks around the UK before shipping them to a single yard for assembly, as was done with the Queen Elizabeth class aircraft carriers.

However, the shipbuilding sector has struggled recently with Babcock’s facility in Appledore, Devon closing in 2019, Harland and Wolff in Belfast entering administration and Ferguson Marine in Glasgow being nationalised by the Scottish government.

The latter two featured in Team 31s initial bid, but Howie told DPI the next stage of the process would see UK shipyards bid to provide these blocks. Arrowhead 140 is 138 metres long with a displacement of 6,095 tonnes, and features four boat bays mid-ship with a flexible mission bay beneath the flight deck.

To find out more about the Type 31e's exportability, read the latest digital edition of our magazine