ECA and iXblue unite under the new Exail brand at Euronaval 2022 in Paris. 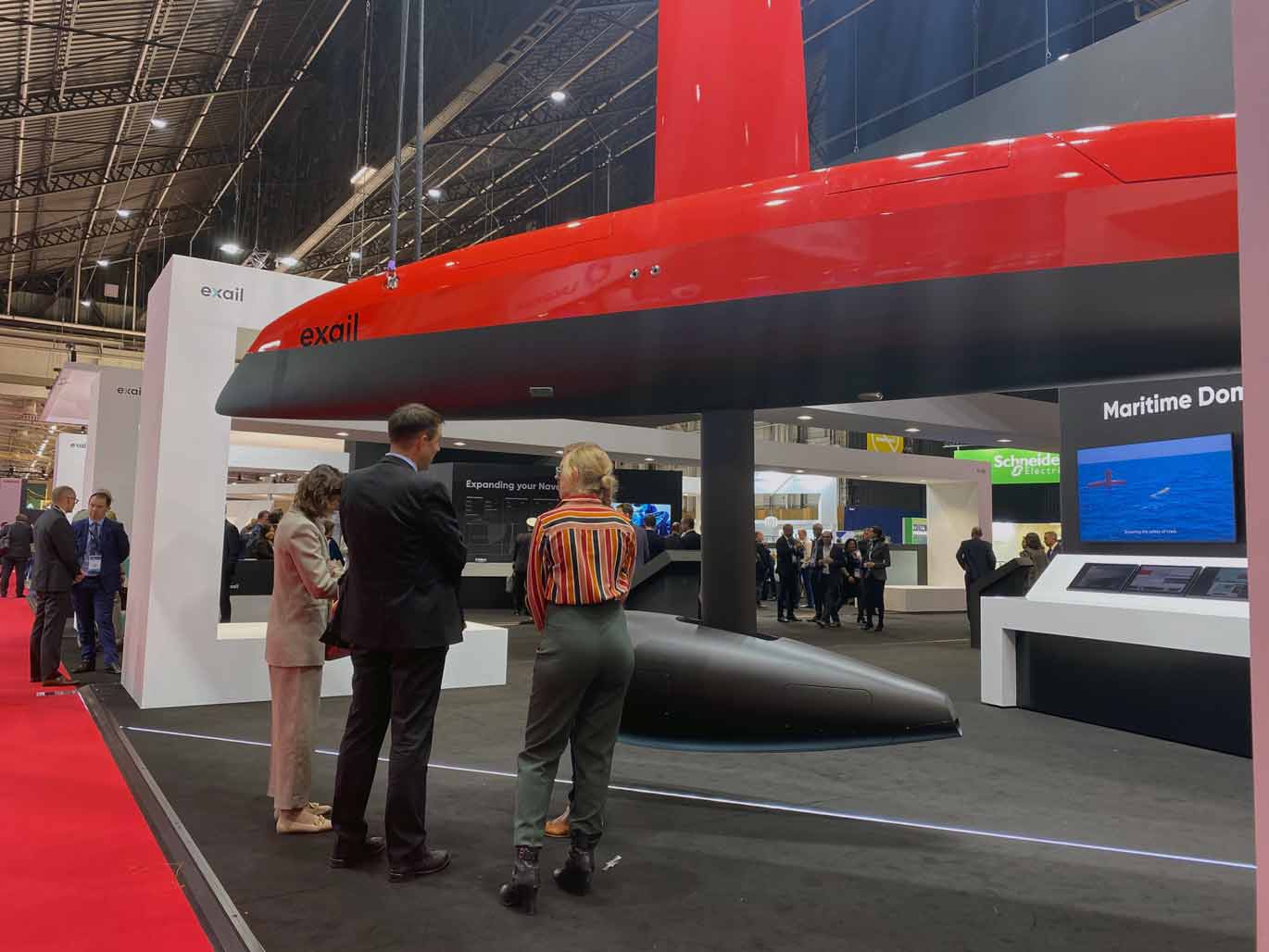 One of the drawcards att this year’s Euronaval in Paris was what, at first glance, looked like a glossy red submarine dangling from the ceiling of the Parc des Expositions in Paris’ Le Bourget, and the associatied  branding of a company calling itself Exail.

It turns out Exail is the new joint branding for ECA Group, a well-known supplier of autonomous underwater vehicles and Unmanned Surface Vessels for unmanned mine countermeasures, and iXblue, a provider of navigation, photonics, and maritime autonomy solutions for both civilian and defence applications.The two companies officially unveiled the rebranding at the Paris maritime show.

And that red glossy submarine that everyone wanted to get photos of or selfies next to at Euronaval, well that is the DriX Unmanned Surface Vehicle (USV) developed by iXblue in 2017 for hydrographic survey or seabed mapping. “It can map the seabed at a fraction of the time of traditional vessels,” according to an Exail spokesperson.

Travelling at speeds of up to 13 knots and with an endurance of up to 10 days, the remotely controlled DriX is able to withstand two-metre high waves, providing a more stable platform than conventional hydrographical vessels for data acquisition. The DriX is in service with the Polish Navy for seabed mapping and is used by the National Oceanic and Atmospheric Administration for ocean exploration.

But with the combination of iXblue and ECA’s technologies under the new brand Exail, the company is also exploring other use cases for the DriX beyond seabed mapping.

It could, for example, act as a communications gateway or hub between subsea drones or Autonomous Underwater Vehicles used in unmanned mine countermeasures or ASW, and remote operations centers.

The DriX can carry a wide range of payloads and when paired with other systems such as acoustic subsea positioning systems it can provide multi-AUV control and positioning. It also has a much smaller radar cross-section than conventional motherships, making it suitable for not only deep-sea exploration, but also seabed warfare.

In the lead up to Euronaval, the company conducted a demonstration for the press of the DriX and Exail's A18D AUV in action together. The DriX communicated with the A18D using Exail's Gaps subsea acoustic positioning system which provided navigational data for the AUV and relayed data to a shore-based command centre. In this way data was able to be collected transmitted more quickly instead of waiting for the AUV to surface.

The demonstration was the first time the two vehicles were used in combination with one another.

“The new synergies created with Exail open up unlimited prospects for the development of new products and systems that will continue to push back technological limits and expand our customers’  capabilities,” stated Fabien Napolitano, CEO of iXblue.