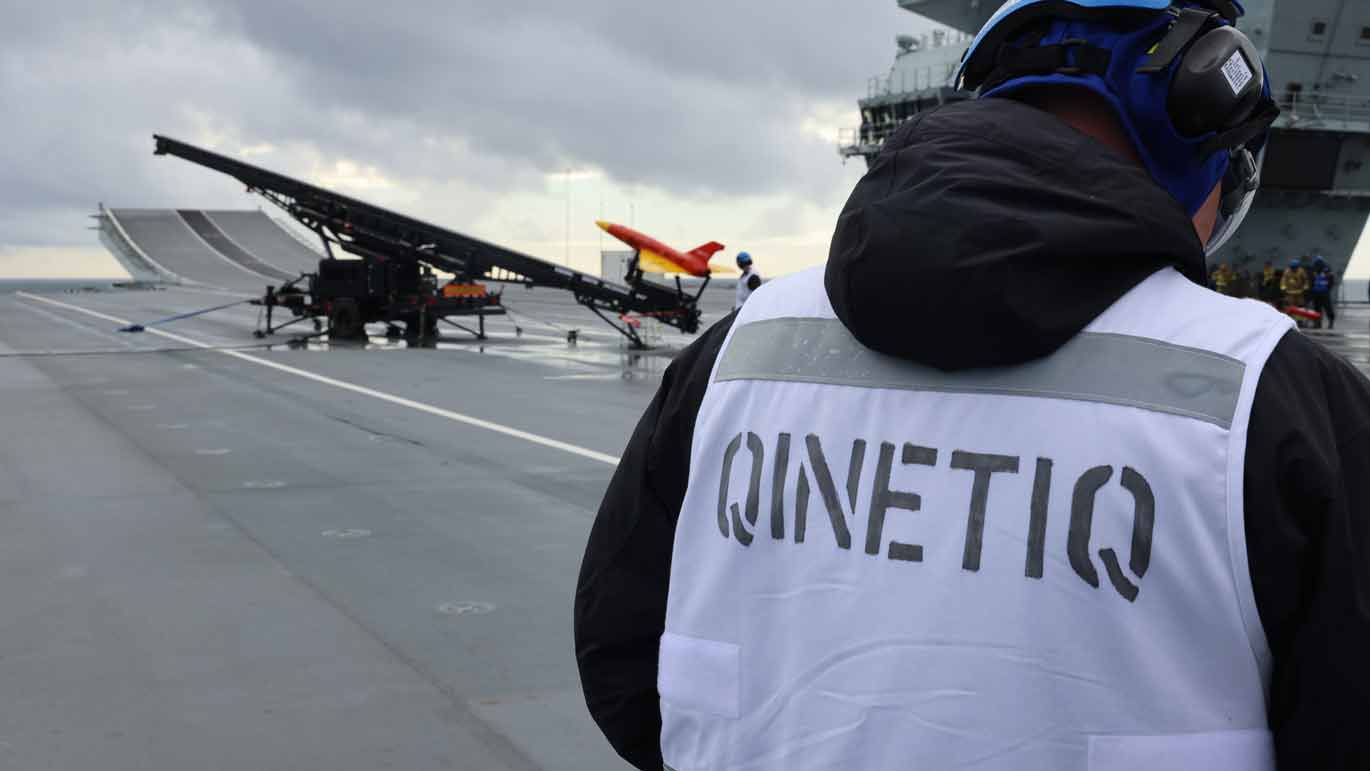 An uncrewed Banshee Jet80+ ‘Red Air’ enemy aircraft has been launched for the first time from a British aircraft carrier.

QinetiQ launched the Banshee Jet80+ from the deck of the Royal Navy’s HMS Prince of Wales aircraft carrier off UK waters to help crew train for real-world scenarios by flying as realistic threat targets.

The training demonstration was part of the Royal Navy’s Future Maritime Aviation Force, which looks at how the Fleet Air Arm will operate in years to come. By successfully demonstrating the operation of drones from the deck of aircraft carriers, the Royal Navy will now be able to take the Banshees on board and conduct air defence exercises for both F-35s and ships within the Task Group, anywhere around the world, including while on deployment.

QinetiQ is also working with the Navy to understand further utility for the Banshee for experimentation and the use of differing payloads as part of the wider Maritime UAS strategy.

The Banshees provided the crew of HMS Prince of Wales the opportunity to run drills by emulating cruise missiles and enemy fast jets which may be faced on mission. The Banshee can operate at 25,000ft, or just above the waterline, and fly at speeds of up to 400 knots, delivering a realistic adversary to train against. The use of the drones as enemy aircraft was essential in helping the carriers improve their defence capabilities as the size of the Banshee is representative of an incoming missile on radar systems.

“This demonstration marked a crucial step in the Royal Navy’s future maritime aviation roadmap and its ability to train anywhere in the world with uncrewed assets. The partnership with QinetiQ has proven invaluable in our ability to support our training needs,” said Phil Kelly, Senior Responsible Owner for the RN’s Future Maritime Aviation Force.

The demonstration was conducted on the MoD Hebrides range and contracted through QinetiQ’s Long Term Partnering Agreement (LTPA). Owing to the existing commercial relationship, QinetiQ was able to move at speed to deliver the targets and supporting services to enable the demonstration, achieve UK airspace clearances and provide training in uncrewed capabilities.

“The demonstration shows how our ongoing partnership with the Ministry of Defence enables all branches of our armed forces to train effectively against threats in a realistic scenario,” said Steve FitzGerald, Group Managing Director Maritime & Land, QinetiQ. “The use of crewless technology is paramount to the Royal Navy’s future programmes. This demonstration delivers an efficient method of training, ensuring the correct payloads are used against the appropriate target to deliver value for money, whether at home or during deployment overseas. It’s anticipated that this form of training will become best practice in the near future.”

The Banshee Jet 80 was first launched by QinetiQ in 2014. Its successor the Jet 80+ can reach speeds of 200 metres/second with endurances exceeding 40 minutes.