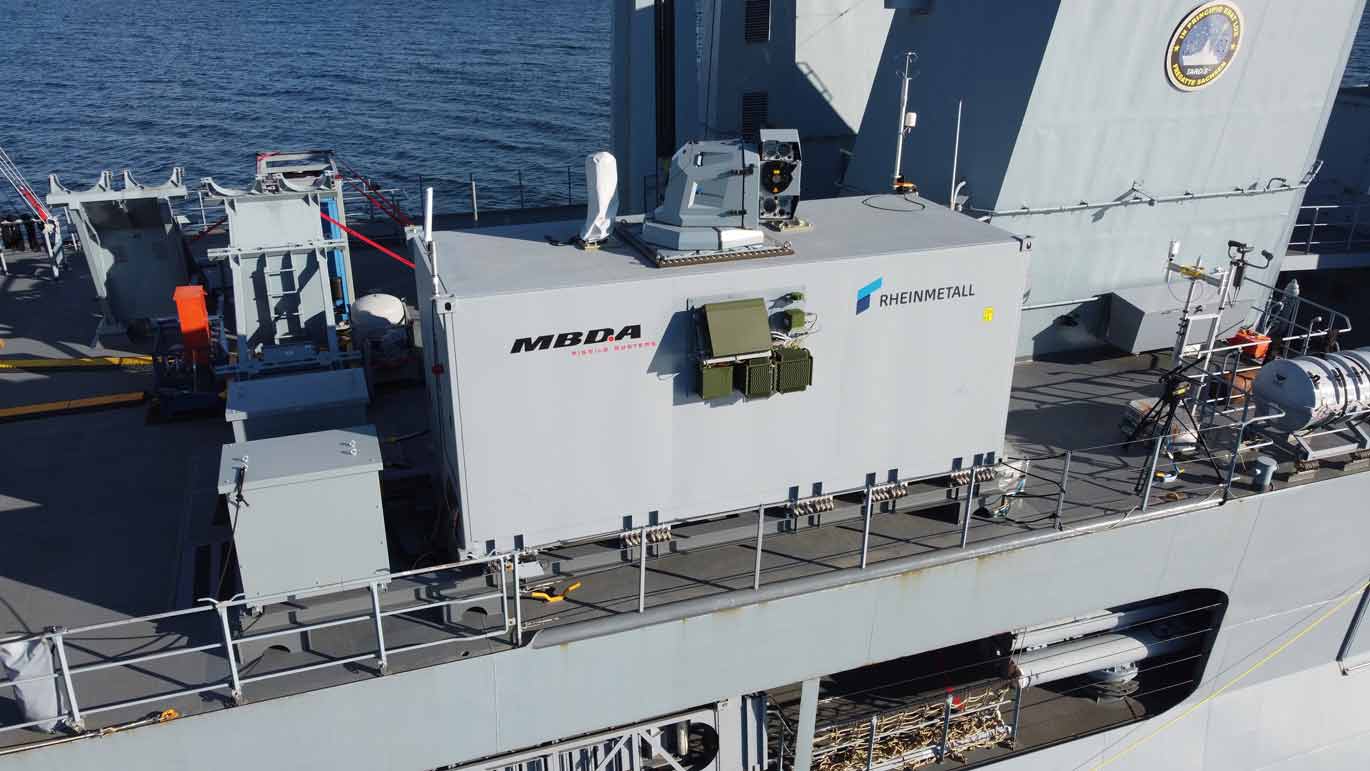 For the time ever, German Armed Forces fired a shipboard laser weapon on board the German frigate Sachsen to successfully engage drones at short range in the Baltic Sea near the Putlos Major Training Area. The trials took place over the summer.

Future high-energy laser (HEL) weapon systems for the Navy will be especially useful in defending against drones and drone swarms as well as engaging attacking speed boats at close and very close range. But the system can also be designed for greater output, enabling it to destroy guided missiles and mortar rounds.

The joint integration and test phase of the naval demonstrator started in November 2021, which the ARGE integration team concluded with a successful factory acceptance test at Rheinmetall’s Unterlüß proving ground.

The demonstrator was then installed onboard the frigate Sachsen in Kiel. In July 2022 the first test campaign took place in Eckernförde Bay near the Bundeswehr’s Technical Centre for Ships and Naval Weapons, Marine Technology and Research, WTD 71, in Surendorf.

During the trials, the capabilities of various sensors, including the electro-optical sensor suite from the ARGE and the radar, were verified. In addition, the interplay between all the components and procedures in the entire operational sequence from target acquisition to engagement was put to the test.

The trials included multiple highly realistic engagement scenarios. The test planning and the provision of various types of targets on land, at sea or from the air were carried out and organised by the Federal Office of Bundeswehr Equipment, Information Technology and In-Service Support (BAAINBw). The test management was carried out by WTD 71.

Daniel Gruber, naval demonstrator project manager at MBDA Deutschland, and Dr. Markus Jung, in charge of laser weapon development at Rheinmetall Waffe Munition, were on hand to observe the test campaign with the frigate.

For everyone involved, the historic live fire test from a German Navy warship was a special moment. The team succeeded in proving the demonstrator’s capabilities in full. “Solid teamwork between the two ARGE partners played a key role in helping us integrate a fully functional, high-performance demonstrator onboard the frigate”, reports Gruber. “Close cooperation with the command team of the Sachsen enabled direct communication with the future user. This way, ideas from the Navy could be directly incorporated or implemented during subsequent development.”

Dr Thomas Baumgärtel, project manager for the naval demonstrator at Rheinmetall Waffe und Munition, said the principal components of the demonstrator are truly high tech. This is the result of long years of research at both the participating companies. Many of the demonstrator’s system components were developed specially for the project and combined in this form for the first time.

“Moreover, given the extremely short integration phase for a system of this complexity, we’re very proud of the results achieved thus far and of how well the trials went. The impressive performance of the HEL [High Energy Laser] effectors in protecting surface combatants from short- and very-short range threats can be credited to the joint efforts of everyone involved in the project – defence industry experts, government officials, and of course the men and women of the frigate Sachsen.”

Doris Laarmann, head of laser activities at MBDA Deutschland, and Alexander Graf, in charge of programme management for laser weapons at Rheinmetall Waffe und Munition, emphasized how the current trials have now set the basic stage for introducing laser weapon systems and capabilities into the Bundeswehr – capabilities whose relevance is by no means restricted to the Navy. The defence industry is pressing ahead with laser systems that will help to protect troops deployed in harm’s way in multiple applications.

Testing of the high-energy laser weapon will continue until mid-2023. In subsequent test campaigns, new scenarios will challenge the demonstrator’s capabilities. Not least, the results will determine what still needs to be done on the path to a fully functional, operational laser weapon.

Effector-related tasks in the ARGE are basically evenly divided. MBDA Deutschland is taking care of target detection and target tracking, the operator console and linking the laser weapon demonstrator to the command-and-control system.

Rheinmetall is responsible for the slewing system, beam guidance, the demonstrator container as well as mechanical and electrical integration of the demonstrator onto the deck of the Sachsen, and finally for the high-energy laser source, including its periphery.