The biggest build-up of forces for a generation on NATO's eastern flank is complete, but what is their effectiveness? 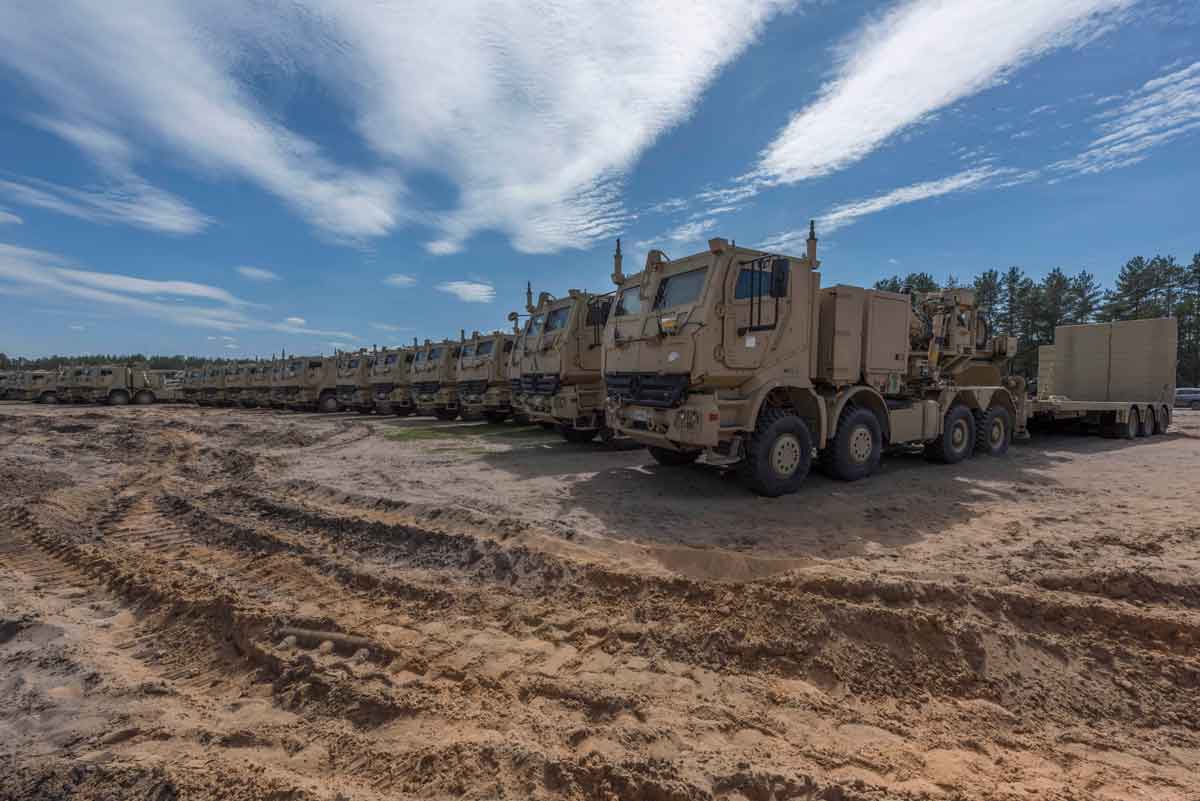 
More than 1,000 soldiers from seven NATO nations participated in a ceremony on the 19 June  at Camp Ādaži, Latvia, to mark the standup of NATO’s enhanced Forward Presence (eFP) battlegroup in Latvia.

The battlegroup will operate in concert with the Latvian Land Forces Infantry Brigade. The eFP battlegroup is commanded by Lieutenant-Colonel Wade Rutland and is comprised of soldiers from Albania, Canada, Italy, Poland, Slovenia and Spain.

The Canadian Armed Forces are contributing up to 450 troops to the battlegroup, including headquarters staff, an infantry company with light armoured vehicles, military police and logistical and communications support.

Most of the Canadian soldiers currently deployed in Latvia are from 3rd Canadian Division, based in Edmonton, Alberta. This deployment is part of Operation Reassurance, the Canadian Armed Forces’ support to NATO assurance and deterrence measures in Central and Eastern Europe. The assets deployed under Operation Reassurance represent Canada’s largest sustained presence in Europe in more than a decade.

All NATO eFP battlegroups are now in place as agreed upon by NATO heads of state and government at the Warsaw Summit in July 2016. NATO eFP battlegroups have also been established in Estonia, Lithuania, and Poland, and are led respectively by the United Kingdom, Germany, and the United States. Germany deployed 600 soldiers to Lithuania from the beginning of this year. 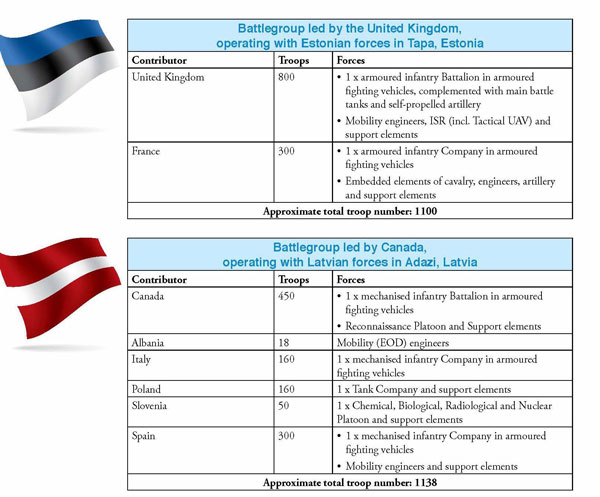 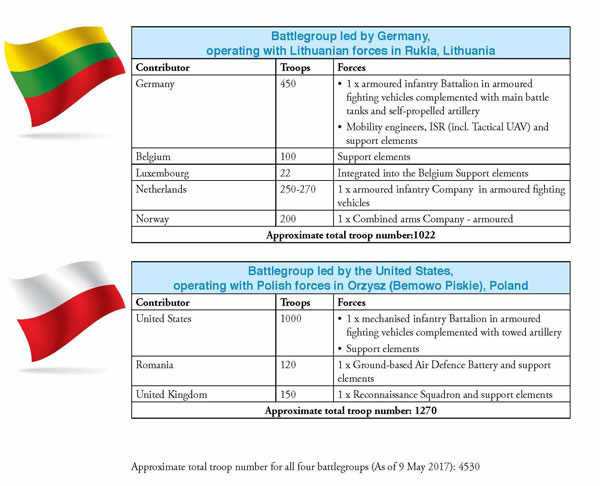 The eFP forms part of the biggest reinforcement of NATO’s collective defence in a generation, which also includes an enhanced presence in the Black Sea region. They are part of the alliance’s response to the Russian government’s decision to use military force against its neighbours (Crimea, Ukraine), and its military build-up in the region.

According to Ralph Zwilling a German-based defence writer, the affected German Army units were informed about their mission in the Baltics a long time ahead so they could adapt their long-term training plans accordingly.

After a very intensive training, running for several weeks, Zwilling says soldiers of the 122nd Armoured Infantry Battalion from Oberviechtach, commanded by Lieutenant Colonel Christoph Huber, together with their comrades of 104th Armor Battalion from Pfreimd, 4th Support Battalion from Roding, 4th Combat Engineer Battalion from Bogen as well as 131st Artillery Battalion from Weiden conducted their final training exercise at the Grafenwöhr training area during the first two weeks of December 2016.

Whilst some have criticised NATO’s eFP as a provocative measure that could antagonise Russia, the eFP battlegroups are said to be defensive in nature, proportionate to the changed security environment, and fully in line with NATO’s international commitments. Their aim is to prevent conflict and preserve regional stability. 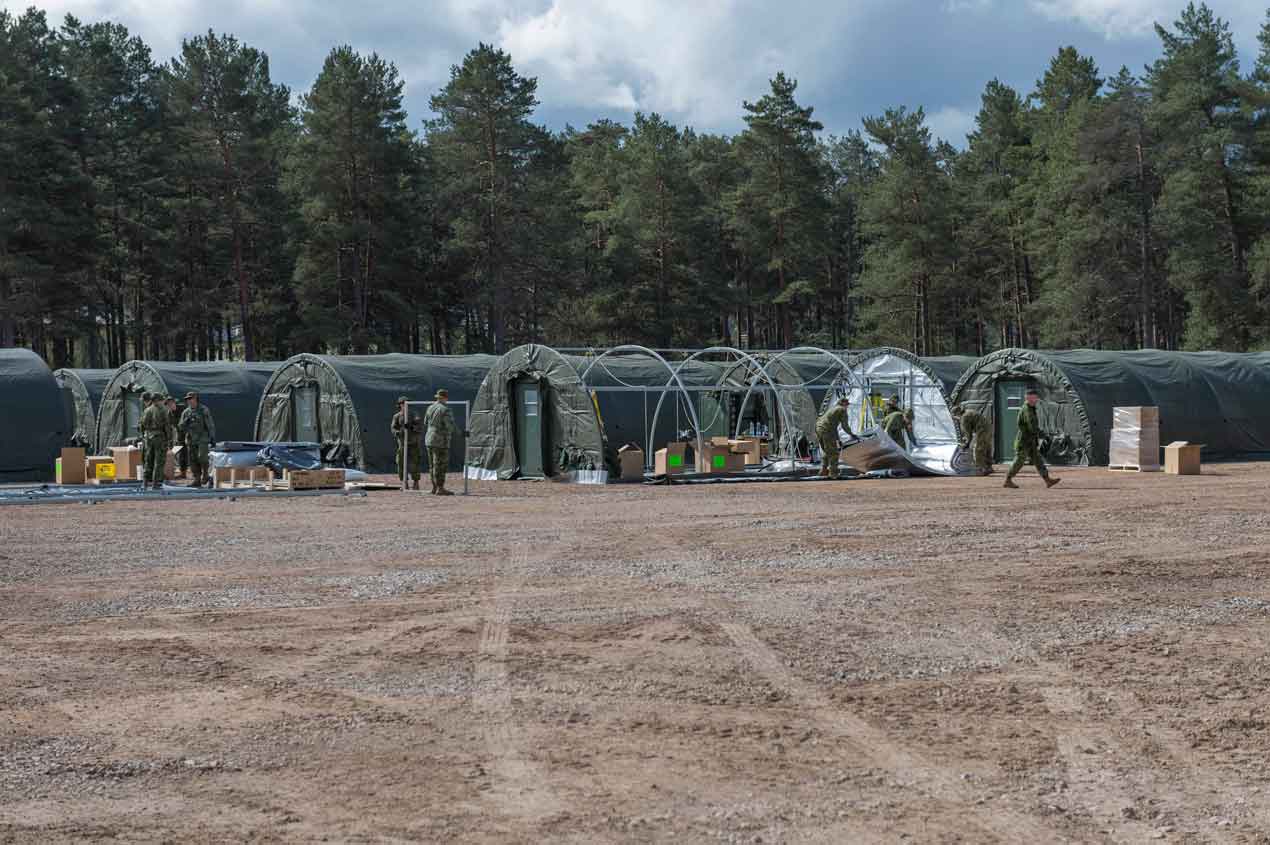 However, as a direct reaction to the planned establishment of the three battlegroups in the Baltics, Russia announced the activation of three new divisions on its western and southern borders in Smolensk, Voronezh region and Rostov.

The multinational nature of NATO’s eFP may be viewed as both a strength and a weakness , says John Deni,  a research professor of security studies at the Strategic Studies Institute of the US Army War College and an adjunct professor at the American University’s School of International Service, writing in an April 2017 article.

“With so many allies involved, especially in the battle groups in Latvia and Lithuania, there is bound to be a reduction in operational effectiveness. It had been common practice among NATO allies to limit multinationalism below the brigade level,” Deni writes.

Trying to put battalions from multiple countries together as part of a single brigade "stretched multinationalism to its limit," says Deni, "leading to challenges in terms of language, equipment interoperability, and command philosophy.” Despite NATO allied forces having fought together in ISAF operations in Afghanistan, Deni says the interoperability challenges remain significant.

In a blog post, the International Institute for Strategic Studies in London says NATO’s eFP lacks the power and size to deter Russian forces, with “significant challenges in command and control and interoperability at both local and alliance level.” However, it adds that if sustained, the eFP could contribute to defence and deterrence in the Baltic region, as well as enhance combat-readiness among NATO allies.