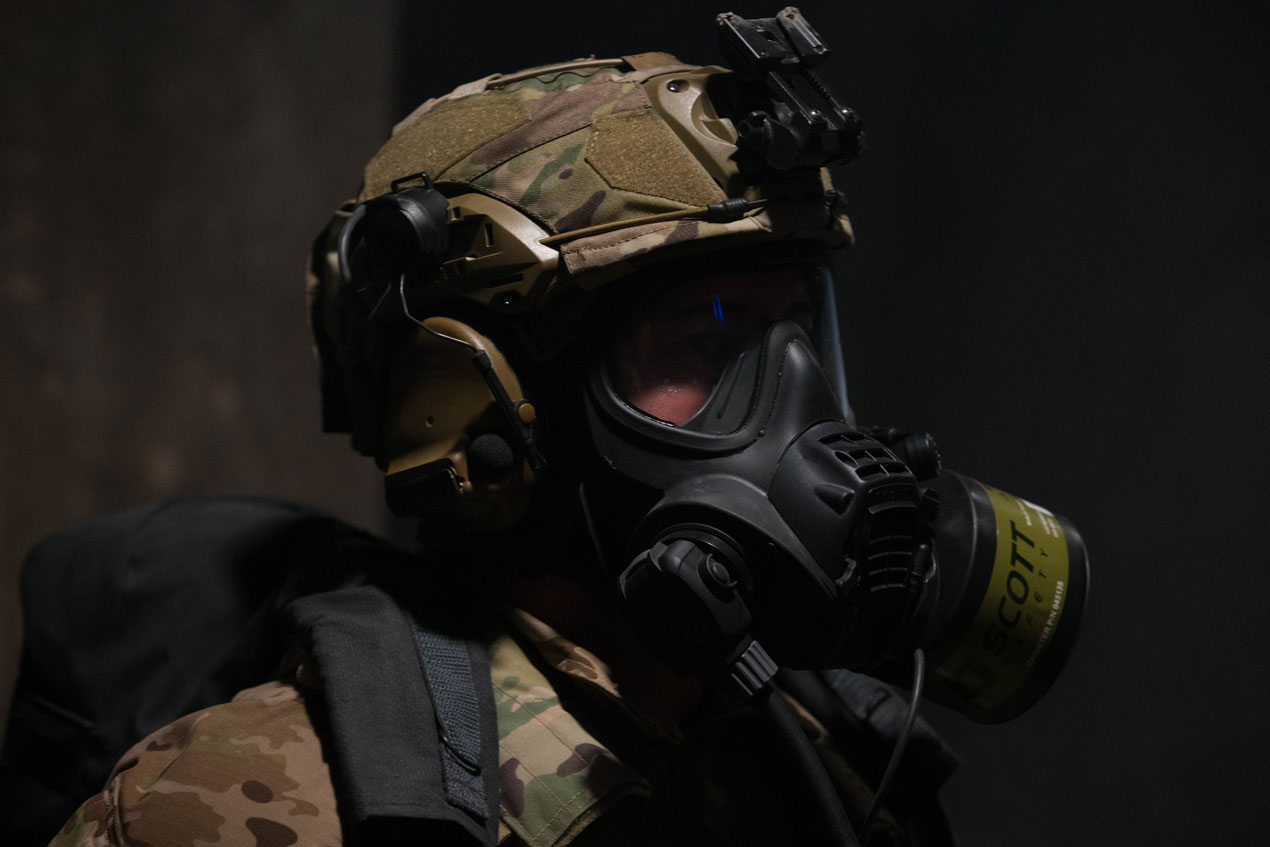 From a military perspective, a CBRN environment, not only includes the actual CBRNe (Chemical, Biological, Radiological, Nuclear, and Explosive) materials,  threats and hazards, but also their potential effects on ongoing defence operations. These effects are created through the intentional or unintentional release of CBRNe materials in the operational environment (OE). The OE is the  combination of the conditions, circumstances, and influences which will determine the use of military forces and help a unit commander  make decisions.

What type of operational environment the force element is operating in, can be a complex equation when CBRNe agents are also a consideration. For example, are we operating in a hostile, permissive or uncertain CBRNe environment? Is the terrain a complex or challenging environment, for example,  urban, subterranean or desert terrain?

From an Individual Protective Equipment (IPE) perspective, the modern soldier faces unique risks  operating in environments with unknown CBRN contagions. Although their protective ensemble normally reflects a high level of protection, including the latest CBRN respiratory protection, not all military respirators are effective in confined spaces where there is not enough oxygen in the air to support life, for example, covert CBRNe weapon-storage facilities or underground terrorist bunkers.

RESPIRATORS: NO ONE SIZE FITS ALL

Under such circumstances, one size most certainly doesn’t fit all when it comes to Respiratory Protection Equipment (RPE) for such challenging environments. IPE/RPE solutions must therefore be flexible enough to allow for military operations in all types of terrain and climatic conditions.

The modern respirators such as the General Service Respirator – Evolution Specialist (GSReS) from 3M, covers a wide range of Concept of Operations (CONOPS) and threat scenarios, providing both positive and negative pressure capabilities within the single respirator face piece. As a system it is also designed to be worn with a range of IPE ensembles including CBRN clothing.

Combined with the urgency and a need for rapid action should such CBRN agents be encountered on the battlefield, the importance of effective communication during such an event, including identification of challenges and possible pitfalls before crises occur, goes without saying. Therefore, nations such as the US  have placed increasingly significant importance on information superiority as one of the keys to prevailing in conflict against other forces throughout the world. As even under challenging CBRNe conditions “manoeuvre” will still be an essential element of combat power. Improving “Operational Tempo” in such hostile and restrictive CBRNe operating environments can only be achieved through enhanced shared situational awareness.

For example, the deliberate release of the Novichok nerve agent in Salisbury, UK in March of 2018 not only resulted in a human fatality and contamination of significant areas of land and infrastructure around Salisbury, but it also required defence forces to operate under a “Military aid to the civil power” (MACP) type footing in the UK. If the required dynamic and joint approach by the defence forces and other national response agencies is to be delivered in an effective and timely manner for such events, then a domain where information exchange is critical to mission success, needs to include improved end-to-end shared situational awareness from individual soldiers all the way up to command HQ level.

However, the high levels of protection necessary to protect the modern soldier in an ever changing CBRNe environment can, potentially, result in a combined IPE ensemble that is burdensome and poorly integrated with other mission-critical equipment or inhibits individual communications with the outside world. For example, full face piece respirators can interfere with visual cues when speaking and listening. It thus becomes more difficult not only to recognise what is said, but also who is saying it.

Distance and intelligibility are interrelated; longer distances between communicating sections can result in less intelligibility. This latter facet is significant when one considers the size of operational safe distances utilised in military operations, especially in subterranean environments, where safe cordons of up to 300-500 metres could be typical for some decontamination operations.

Command and control is difficult in any operation encompassing CBRNe agents particularly built-up areas. Unless designed correctly, a soldier’s IPE ensemble may inhibit personal communications, and this needs to be considered before carrying out any CBRN hazard management activities. You cannot fight if you cannot hear.

Special communication equipment is now available from leading RPE manufacturers and some respirators now have speech diaphragms incorporated into the mask or are made of materials that enhance speech transmission. For example, the speech diaphragm incorporated within the GSReS, is situated directly in front of the wearer’s mouth and is designed to minimise speech attenuation. Through its unique design, the communication system on a modern respirator such as the GSReS can be augmented via a Voice Projection Unit, which simply clips onto the respirator’s internal speech diaphragm and amplifies the speaker’s voice, enabling it to be heard at distance more clearly. Whilst integration into a secure radio-communications network can be achieved through the addition of dynamic or electret microphone and “Push to Talk” or radio array, with connection to a Peltor-based communications headset from 3M.

Dedicated communications systems such as the PELTOR COMTAC Tactical Communication Headsets from 3M have the added advantage of an environmental listening feature (level dependent functionality) for auditory situational awareness and face-to-face communications. Environmental listening is a means of allowing low-level sounds to bypass the individual hearing protection while still protecting against the harmful peak sound pressure levels likely to be encountered by defence forces in a kinetic environment. Sound amplification allows the user to hear low-level sounds, including range commands and conversation.

These RPE solutions were originally intended to meet the exacting threats generated from the Cold War, however the 21st Century Soldier is now faced with an ever-shifting CBRNe threat spectrum. Modern respirators such as the GSReS have evolved accordingly and are now capable of not only delivering their primary life-saving function, but also acting as a common architecture platform with which to integrate other mission-critical infrastructure, such as communications systems and other IPE.

David Crouch is Global Subject Matter Expert for Defence & Public Safety for science-based technology company, 3M and is a professional chemist, with more than 25 years experience in the fields of materials science and CBRN protection. He is also a visiting professor at the Defence Academy of the United Kingdom (Cranfield University – Defence & Security)