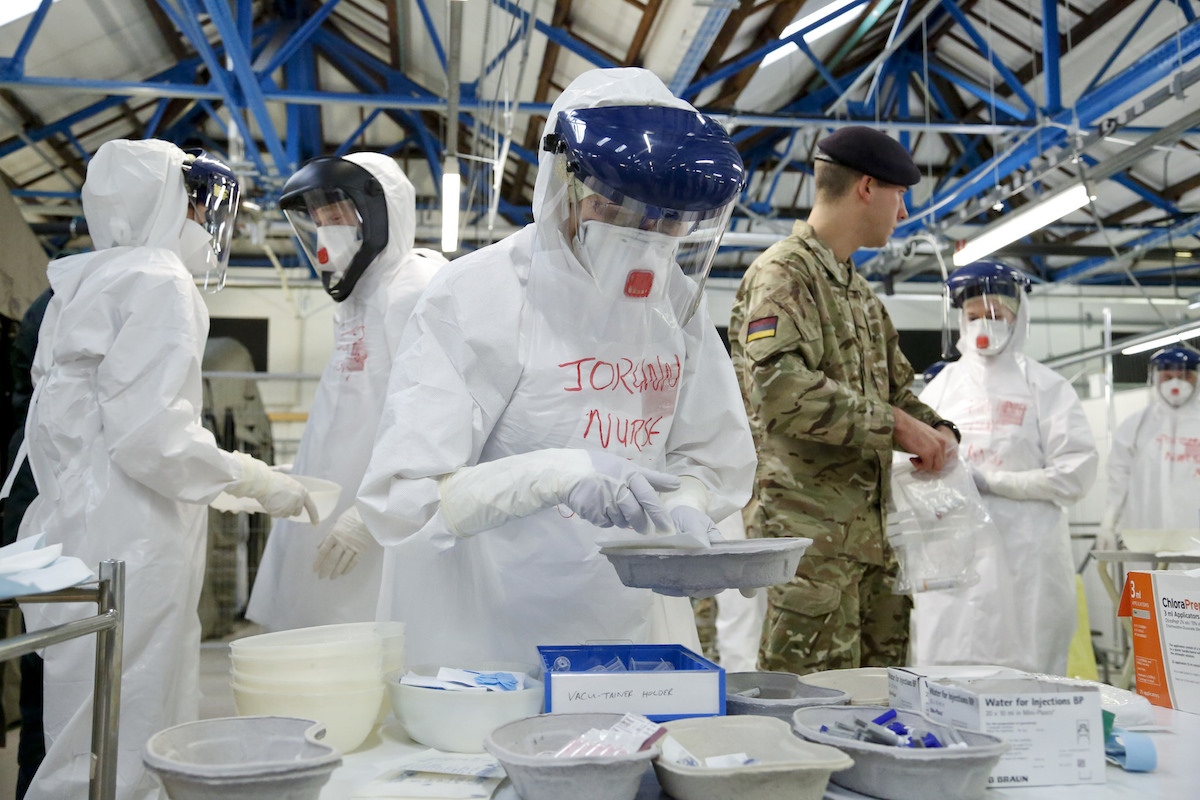 SImulation (live or virtual) is essential in terms of helping the military refine and rehearse accepted tactics, techniques and procedures (TTPs) before they deploy on a mission or tactical operation. In most cases, military doctrine and TTPs are well-entrenched and understood by military personnel before they enter a training environment.

But in 2014 when more than 100 members of the British Army’s 22 Field Hospital found out they would deploy to Sierra Leone to work in a treatment facility for local and international healthcare workers that may have contracted the Ebola virus, there were no well-rehearsed military doctrines or TTPs in place. “We created the world’s best trauma hospital in the desert of Afghanistan with a 98.6% survival rate, but we were completely untested in a deployed hospital to care for infectious diseases and there was nothing out there to show us how to do it,” explains Lieutenant Colonel Chris Gibson, chief instructor, Army Medical Services Training  Centre. Defence Procurement International spoke with Lieutenant Colonel Gibson during the Defence & Security Equipment International (DSEI) conference and exhibition in London last September. He was charged with training personnel to work within a completely new health environment and he had just four weeks to do it in.

Soldiers embedded with non-governmental organisations (NGOs) in Sierra Leone were feeding back information to the Army regarding the situation on the ground there, but Gibson says it really was an operation born through training, which is an unusual way of creating operational capability. “Usually you have a doctrine and a policy to follow, but we didn’t have that,” he explains. “We didn’t know what to do, but we knew what not to do. We knew where the mistakes were being made, but the level of care we were going to give was stratospherically higher than that being given in the treatment units or hospitals we saw.”

DON’T BECOME A VICTIM
Lieutenant Colonel Gibson says the Army’s methodology was to go in and provide health care workers with the succour that if they did become infected they would receive first-world care. Greater resilience within the health care system in Sierra Leone was needed to ensure medical personnel did not stay away from the hospitals, which were struggling under the sheer weight of Ebola cases. The 12-bed treatment centre (which later increased to 20 beds) staffed by 22 Field Hospital in Sierra Leone was also there to ensure NGOs that there was a capability that would look after them if they contracted the virus. Although there had been 18 previous Ebola outbreaks in Africa, Lieutenant Colonel Gibson says the one that swept through West Africa in 2014 was larger than all of the 18 combined. He was in Sierra Leone five years prior to the 2014 outbreak and had been in Kikwit in the Democratic Republic of Congo in 1995 when there was a previous Ebola outbreak. So he understood the virus and what it could do to a community.

Gibson says the British military effort in West Africa in 2014 was considerable. “The public information campaigns that were run and the training academies for the indigenous population were hugely successful. But I think what we proved was that we could deal with a very virulent disease really effectively and keep our people safe, and it was quite a challenge to work out how to do that.”

In theatres such as Afghanistan, the enemy was visible and Gibson says it was very much a hospital environment with multiple specialists and kinetic activity going on around the patient. But that approach was not what was going to allow us to win against Ebola, he explains. “Although the will to treat was absolutely there, it was not a case of rushing in to deal with a patient; it had to be a drilled response. It was the rationale of going back to first principles—don’t become a victim yourself.”

DEVELOPING PROCEDURES
To give 22 Field Hospital and other army medical personnel the confidence to know they could go out to Sierra Leone and successfully treat people with Ebola, a mission training facility was established at the Army Medical Services Training Centre (AMSTC) in Strensall, York. A hangar was converted into a mock-up field hospital where simulated casualties were treated to replicate the situation they would find when they deployed to Sierra Leone. The training was designed to develop and assess the clinical and organisational procedures required, including the ‘donning’ and ‘doffing’ of personal protective equipment (PPE).

“I was given the task of telling the military chain of command and [government] ministers that what we had designed would work,” says Gibson. “So how do you do that? We knew we could treat, but we wanted to be much more dextrous. We wanted to be in a facility we could stay in for up to two hours.” Gibson says the NGOs working in Sierra Leone were wearing industrial suits, which were only suitable for 15 minutes of work before they had to come out. “To us that didn’t make any sense,” he says. “We needed to be able to work for longer because the protocols and interventions we were doing required a much lengthier period of time; putting in a central line and conducting a blood transfusion you’re not going to do that in 15 minutes.”    As there were no well-established operating procedures already in place, to better understand where the contamination of local and international healthcare workers was occurring, Gibson referred to information provided by military doctors that were embedded with NGOs and then videoed all training conducted in York to gain deeper granularity. 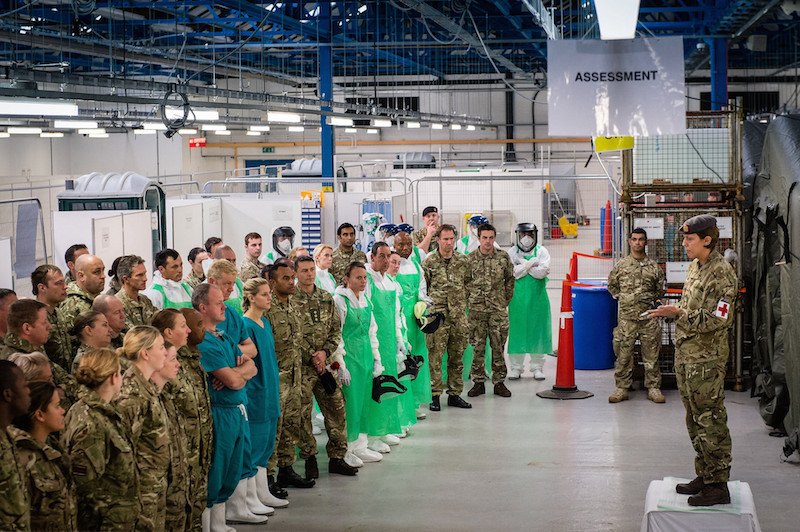 “The deploying unit and the training team at AMSTC had to write 56 operating procedures,” says Gibson. “We videoed all of them and created a distance learning app, which was professionally narrated in multiple languages so we could send them  out to the NGO community. I could watch how much learning they’d done before they arrived [in Sierra Leone] and if they hadn’t completed it I could send them away and say, ‘You haven’t done enough, you’ve not got to the starting line.’”

Live needles were used for intravenous cannulation to mimic what would happen in reality. Trauma FX developed a special skin-like material made of silicone with a Kevlar backing for protection, which the needles could be inserted into for training purposes. They also developed an ultraviolet dye, which could be injected into any simulated body fluid. “So if we were cannulating (inserting a cannula into a body cavity, duct, or vessel to drain fluid or administer medication) we could inject that into blood reservoirs and send it to the labs, which would then test for it,” Gibson explains. “If they saw the UV dye in there they would give the result back that it was positive and the full end-to-end process could occur.”

GETTING IT RIGHT
The UV dye was also visible on medical personnel’s clothing so when they were ‘body mapped’ or screened after taking off their PPE, any UV dye that showed up under ultraviolet light meant that Lt Col. Gibson was able to look for any error in either standard operating procedures or drills, or indeed anyone that was being lackadaisical in their approach and what the cause analysis of that was. “Straight away we started to have a data bank to help us understand why people were getting infected,” he says. “We could go back and review and review.”

“So that’s what I gave to  the chain of command. Straightaway you built up a level of confidence that we could go in there and not die. It was a great use of soft power.” According to the World Health Organisation’s February 2016 Ebola Situation Report, the outbreak in West Africa was declared to have ended in Sierra Leone on 7 November 2015. Isolated cases continue to be reported, but nowhere near the tens of thousands of cases at the height of the outbreak in 2014. The training provided and experience gained by 22 Field Hospital and other army medical brigades could now prove invaluable in future public health or disease outbreak scenarios where the military is called upon to assist. The UK Ministry of Defence’s 2015 Strategic Defence & Security Review, which sets out the government’s approach to national security, highlighted public health as a Tier One risk over the next five years.

Infectious disease is going to become more prevalent,” says Lt. Col. Gibson. “We’re not far away from an influenza outbreak. If our experience from Sierra Leone could transfer into the NHS we’d be delighted. We’re not being retentive about this information. We’re delighted to share it with wherever the chain of command should go. It could be used successfully elsewhere.”