The latest technology in design and manufacture were applied in the designing of the third generation of NORA. The weapon is modular, which provides for the delivery of a number of different options depending of the user’s choice. 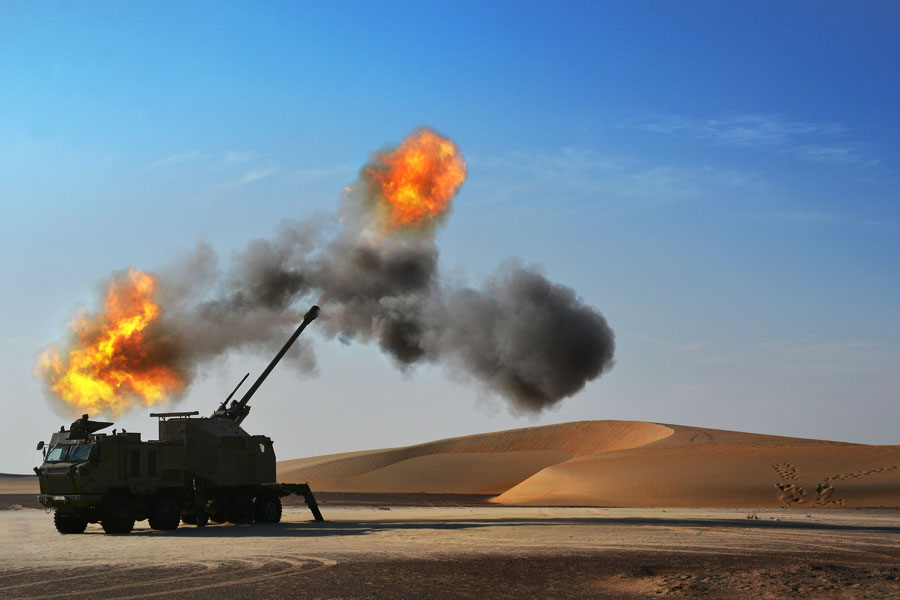 The introduction of ballistic protection has increased the probability of survival of the weapon when exposed to fragmentation effect of ordnance and rocket missiles. Apart from protection against fragmentation effect, the applied solution of ballistic protection also provided resistance to ambushes or raid effects of enemy special units using small arms, as well as certain resistance of vital component parts of the weapon against antipersonnel and anti-vehicle mines and improvised explosive devices.

The NORA-B52 155mm self-propelled gun-howitzer meets the following mobility and passability requirements:
-maximum speed on a level asphalt road is 90 km/h
-maximum speed on a level macadam road is 40 km/h
-maximum off-road speed is 15 km/h
-trench width is 1600mm
-maximum gradient is 50%
-maximum side slope is 20%
-range of movement on a level road (asphalt or good macadam road) to is 500 km
-fording depth is 1.0m
-vertical obstacle height is 0.50m
-minimum turning radius is 16.6m
-flat-tire driving range to is 50 km

The NORA-B52 155mm self-propelled gun-howitzer should have the following armament:
-primary armament: 155mm gun with a 52-caliber barrel, installed in a turret (partly armoured) on a modified chassis of an off-road vehicle (12 projectiles and 12 propellant charges in the automatic loader and 24 projectiles and 24 propellant charges in the ammunition containers behind of cabin),
-secondary armament: - 12.7mm machine gun with a cupola,
-smoke pot launchers (two groups with 82mm launchers each, installed in the front part of the vehicle cabin),
-training armament: coupled 20mm M55 gun.

The combat mass of the NORA-B52 gun-howitzer, with a 0.5 combat set and the crew members, does not exceed 36 tons.

The number of crew members of the NORA-B52 self-propelled gun-howitzer is 5 (commander, gunner, driver and two crew members).

The weapon part of the fire control system includes:
- a unit for inertial navigation, orientation and laying in the basic direction,
- a unit for determination of the relative location of the weapon,
- communication equipment,
- the unit for communication between the crew members,
- PLC unit,
- indicators of the firing elements and other information with computers (commander's and gunner's counters),
- a set of sighting devices for indirect and direct firing with accessories for their lighting,
- a collimator for each weapon for marking the basic direction in the classical –manual operation mode.