Small unmanned aircraft systems present a growing threat to US personnel, facilities and assets. Now the US Department of Defense has a strategy to counter them. 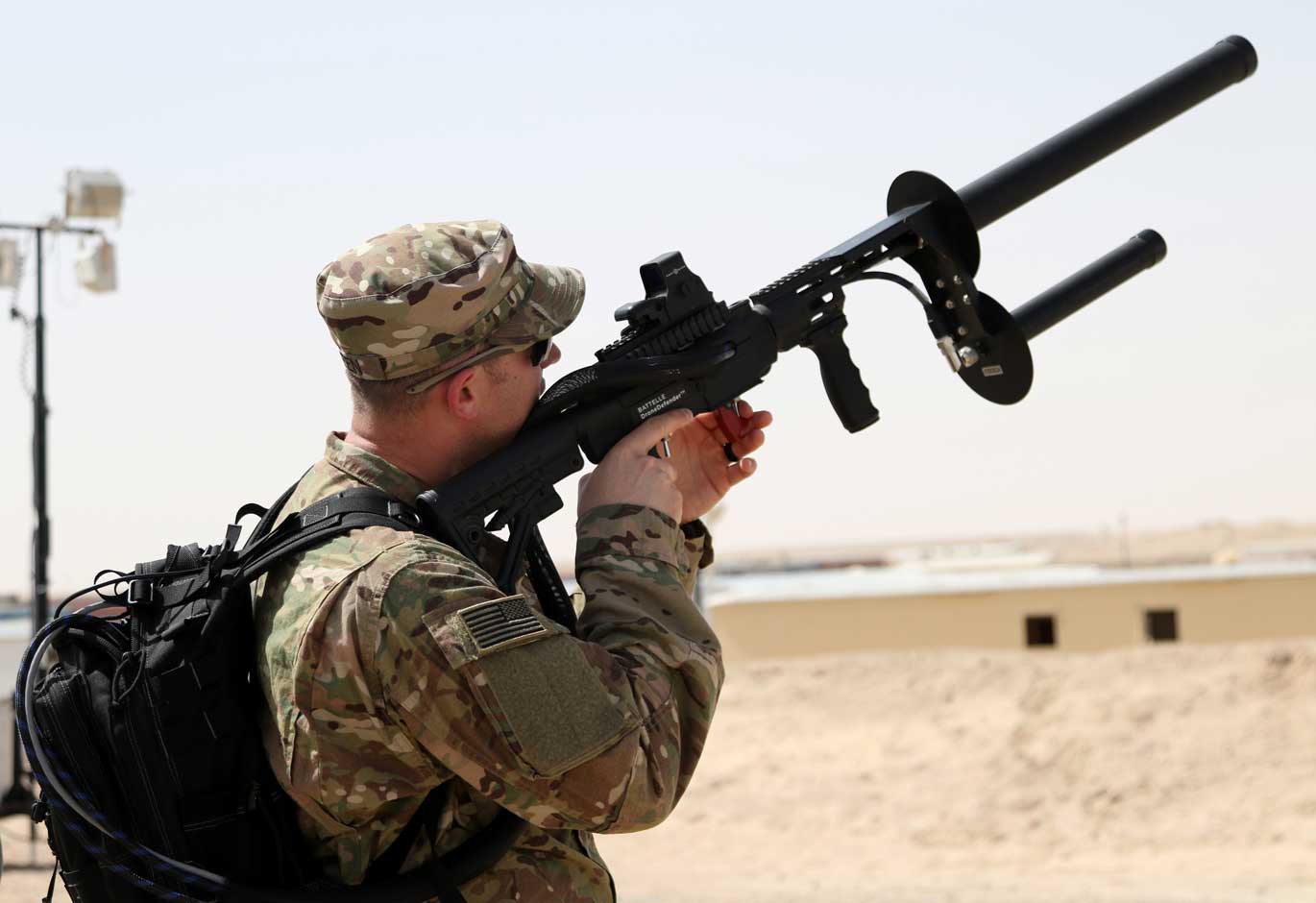 A soldier uses a Drone Defender to capture and control a drone as its flying. The Drone Defender uses an electromagnetic pulse to disable its target and has a range of 600 metres (US Army photo by Mr. Brent Thacker)

From strategic reconnaissance to tactical attack, unmanned aerial vehicles (UAVs) play a critical role in war zones across the globe. Conflicts in Iraq, Syria, Yemen, Afghanistan and Libya, and more recently in the Caucasus region, have acted as war laboratories for different countries to experiment with the latest UAVs.

In 2016, a US-based organisation called the Center For The Study of the Drone at Bard College, said in Iraq and Syria alone, there were “more drones, made in more countries, and flown by more groups, than in any previous conflict.” It counted more than 30 types of UAVs used in both theatres, ranging from the US-made MQ-1 Predator, the Turkish Bayraktar surveillance and attack UAV, to commercial off-the-shelf drones such as those used by ISIS.

2020 saw how the application of comparatively cheap UAVs and loitering munitions can radically change a tactical situation. Of particular note was Azerbaijan's breaking of Armenian ground-and-air defences in the contested Nagorno-Karabakh region.

In a six-week campaign, the Azerbaijani military was able to leverage the new capabilities provided by Turkish UAVs and Israeli-made loitering munitions – as well some ingenious innovation -  to break a well-established defensive line, which resisted assaults from their conventional arsenal on several prior occasions.

Though the war was still hard fought and resulted in thousands of casualties on both sides, the ability of these types of weapons to provide significant force multipliers was observed by larger military forces, which recognize that these types of systems are a potential threat to existing superiority.

Even more concerning is the increasing sophistication of civilian hobbyist drones, which are widely used by non-state actors and criminal gangs. Designated as Small Unmanned Aircraft Systems (sUAS), these were first used by ISIS as artillery spotters and then used to drop explosives on Operation Inherent Resolve forces, a role more terrorist groups have copied since.

However, these devices are also capable of causing vast disruption without any destructive intent. In December 2018 drones kept Gatwick airport closed for two days by repeatedly flying in restricted airspace. No one was ever arrested, and the motivation remains a mystery. Incidents like these mean that major military forces are now factoring sUAS into their doctrine.

“[sUAS] represent a growing threat from adversary nation states, non-state actors and criminals,” said US Army spokesperson Jason Waggoner. “They also pose hazards when controlled by negligent or reckless operators. Given this reality, Counter-sUAS (C-sUAS) capabilities are required to protect and defend personnel, facilities and missions from these current and future threats.”

To this end, the US Department of Defense has issued a “Counter-Small Unmanned Aircraft Systems Strategy,” which sets out the evolving threat posed by sUAS and how the US military intends to deal with its impact on personnel, facilities and assets.

The US is already exploring several C-sUAS technologies, including the Drone Defender pictured above. The strategy talks about the establishment of a Joint Task Force to examine C-sUAS, particularly how the military can work with civilian and international partners to deal with any potential threat. It also talks about the threat posed by purpose-built military sUAS used by countries like China, Russia and Iran. “US forces will likely encounter advanced sUAS equipment, concepts, doctrine, and tactics used by their surrogates in locations around the globe," the strategy document states.

The US Army is also opening a dedicated C-sUAS academy at a location yet to be decided, to develop new tactics and counters, which will be taught to personnel throughout the military.

With the capabilities of sUAS evolving at a remarkable rate, it is likely that most militaries will be not far behind the US when it comes to breaking new ground to deal with this threat.