Unmanned Warrior in Scotland, is a first for the Navy in terms of it working closely with industry, academia and small- to medium-enterprises to help shape future unmanned maritime capabilities.

Every now and then a generational step change in technology comes along, which has a profound impact on military operational capability. In the late 19th century it was Charles Parsons’ steam-turbine-powered vessel Turbinia. At a Queen Victoria Diamond Jubilee Fleet Review in 1897 off the coast of Portsmouth, the Turbinia, travelling at speeds of up to 34.5 knots, outmanoeuvred and outpaced the Royal Navy’s fleet. It must have been a bittersweet moment for Parsons who, as legend has it, spent several years leading up to that fateful moment trying to get the Royal Navy’s Admiralty to acknowledge his invention.

Not long after the Fleet Review warships were fitted with Parsons’ steam turbine system, which led to the development of a new generation of 20th century warships called Dreadnought. Today, the Royal Navy (RN) finds itself on the brink of another ‘generational step change,’ this time in the area of unmanned systems. Eager to heed the cautionary tale of his predecessors who shunned Parsons’ overtures, the UK Royal Navy’s First Sea Lord, Admiral Sir George Zambellas, seems keen to swim with rather than against the tide of technological change.

In October 2014, he announced the Unmanned Warrior demonstration programme, which will take place alongside the Joint Warrior exercise off the coast of Scotland in October this year. Unmanned Warrior will showcase unmanned systems and capabilities from approximately 40 participants, including industry, small- and medium-sized enterprises (SMEs) and academia, as well as the US Navy. Companies that have signed up for Unmanned Warrior include unmanned flight specialist Blue Bear Systems Research, MSubs, Autonomous Surface Vehicles, Atlas Electronik, BAE Systems and Thales. 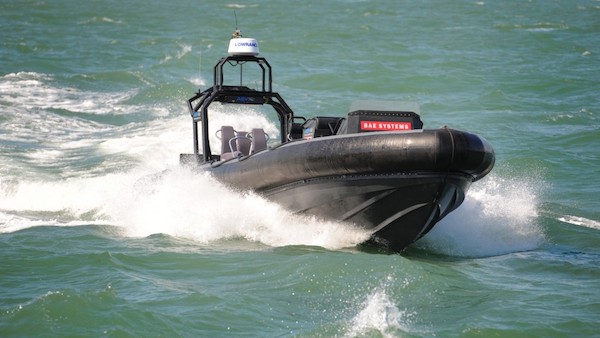 OFF THE SHELF
“There’s been a step change in the mindset that unmanned systems are now in a position where we can relatively easily forsee them being part Commander Peter Pipkin, Fleet Robotics Officer and Royal Navy lead for Unmanned Warrior. The Fleet Robotics Officer post was traditionally associated with maritime combat systems. But last year, Cdr. Pipkin says it was broadened to provide leadership on robotics, autonomy and unmanned systems and how these platforms and capabilities can be delivered and integrated within the RN.

The RN wants to make maximum use of unmanned systems, but Unmanned Warrior is about learning where those uses might be, on what scale and with what functions. Cdr. Pipkin says the RN has deliberately not set itself any arbitrary barriers in terms of the ratio of manned to unmanned systems it is looking to sustain in future until it is better informed. “In most areas, we’re still at the scope and interest stage in terms of working out how we integrate unmanned technologies in our delivery of capability,” he  explains. “We’ve been waiting for technological maturity to evolve before we’ve considered taking them into core capability. Part of that is a generational step change in the way technology is driven. Fifty years ago it was clearly driven by military requirements and space programmes, and now actually, we find that commercial technology is probably ahead of what we’re doing in some areas.”

Pipkin says the Navy’s growing interest in autonomous and unmanned systems has also been fuelled by the growing number of options now available to take relatively cheap, off-the-shelf solutions and demonstrate and explore them. A good example, he says is using an off-the-shelf quadcopter operated by a third party contractor to inspect the mast on a Type 45 destroyer. “Ordinarily, to inspect the mast we’d have to put scaffolding up and send somebody up there,” he explains. “It would cost quite a lot of money and cause quite a bit of disruption. Using a low-cost, off-the-shelf UAV with a good camera attached to it, we can achieve the same task for a lot less money in a couple of hours.” Achieving some tasks with cheaper off-the-shelf systems, says Cdr. Pipkin, will enable the Navy to spend its money more wisely, when needed, on more bespoke unmanned systems. “Part of our journey will be understanding what can’t be achieved with readily available off-the-shelf technology. At least in terms of demonstration, exploring the art of the possible, for a relatively low price point you can achieve a lot.”

A NEW APPROACH TO DELIVERING CAPABILITY
As far as a demonstration of unmanned capabilities goes, Unmanned Warrior is a marked departure from how the RN usually works with industry. Normally, capability demonstrations are organised by its partners such as the Ministry of Defence (MoD) or the MoD’s science and research arm, the Defence Science and Technology Laboratory.  “[Unmanned Warrior] is very much an open ended, come and show us how, not just to industry, but academia,” Cdr. Pipkin explains. “We also wanted to engage SMEs, which the MoD is not traditionally that great at doing.”

Not unlike Parsons who pitched up with his revolutionary Turbinia at Portsmouth hoping to capture the imaginations of the Admiralty, Cdr. Pipkin says the Navy is hoping to be both surprised and challenged by the unmanned systems that will be demonstrated during Unmanned Warrior. “We’re challenging any participant to show us how their systems might be useful. It’s about demonstrating to ourselves and our own decision-makers what the current maturity of these systems is already, what utility there may be in using them and how the future looks. Give somebody a capability to play with and explore and they’ll find ways of using it they could never find before. It’s also a draw to the participants in being able to do that more directly as a number of senior officers  are also likely to be there.”

There will be no specific contracts or requests for tender issued at the end of Unmanned Warrior, but companies participating could have the chance, potentially, to collaborate or work more closely with the Royal Navy on developing their systems to meet future operational requirements. Further down the line, Cdr. Pipkin says there may be an opportunity for participants to pitch ideas directly to the Royal Navy as part of wider efforts to encourage more ‘innovation in the round.’ 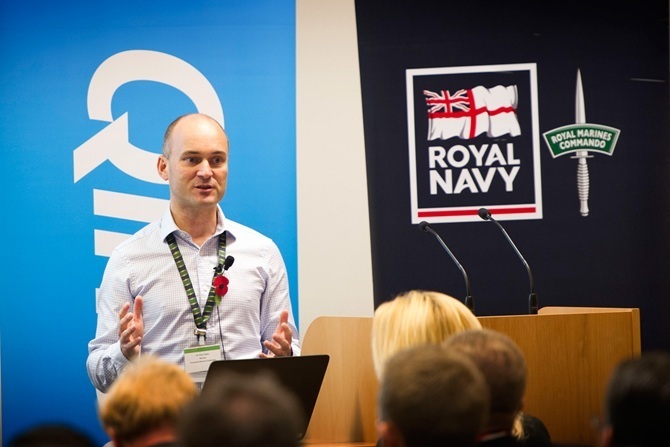 “We don’t want to constrain innovative thinking or continue on that evolution of preconceived ideas of delivering capability,” he explains. “With the defence inflation curve, in not so many more decades we’ll be able to buy one platform that can do absolutely everything, but we’ll only be able to buy one of them. With Unmanned Warrior we’re trying to find a way of breaking that curve and to go back to being able to deliver mass into military capability without seeing the same escalation in cost and complexity.”

Cdr. Pipkin says unmanned systems are but one aspect of technological capability, which may benefit from a more collaborative approach without the bridle of a specific contract or requirement. “Industry often want to know what is it you want, but very often that is difficult to articulate because the world is a place of unknowns.” Unmanned Warrior is not just about challenging how future operational capability is developed and delivered. Running concurrently with the Joint Warrior Exercise, which runs twice a year and attracts a number of international participants, it also provides the opportunity to test unmanned platforms and sensors in a live environment with real ships and aircraft. Cdr. Pipkin says safety  will be paramount and that there will be processes in place to ensure the quality of output particularly for those unmanned systems that are towards the experimental end, compared with those items of kit that are off the shelf and ready to go.

Testing the integration of multiple unmanned systems with RN maritime C2 systems is also one of Unmanned Warrior’s objectives. Whilst that is likely to be more challenging for less mature systems, if the exercise enables live video footage or a radar picture of a bit of sea space from an unmanned system to be fed to a two-star maritime component commander, providing them with a service they are unable to get anywhere else, Cdr. Pipkin says the exercise will have achieved what it set out to do.

The launch and recovery of unmanned systems will also be tested during Joint Warrior. “It is one of our more immediate challenges,” explains Cdr. Pipkin. “We could buy some [unmanned] systems, but unless we can launch and recover them we  can’t integrate them effectively onto our platforms.”