The US Tests Laser Weapons To Counter Drones

The US is ramping up efforts to defeat UAVs and rockets with laser weapons. The latest test saw a laser fired from an Apache helicopter. 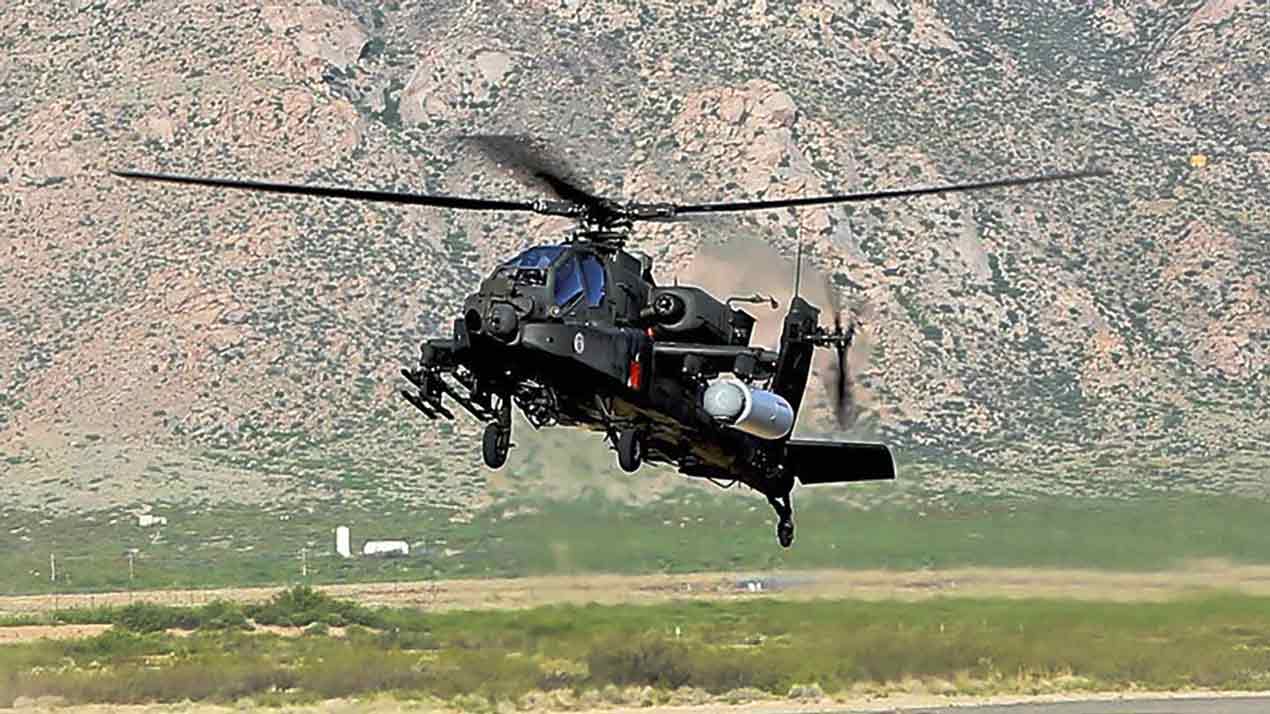 Raytheon and the US Army are testing lasers on rotary-wing aircraft to counter unmanned targets. The tests took place at White Sands Missile Range New Mexico in June and saw a high-energy laser mounted on an Apache AH-64 attack helicopter acquire and hit an unmanned target. The test was conducted by Raytheon and the US Army Apache Program Management Office in collaboration with US Special Operations Command.

Raytheon said it was the first time a fully integrated laser system successfully shot a target from a rotary-wing aircraft over a wide variety of flight regimes, altitudes and air speeds, proving the feasibility of laser attack from the Apache.

The system tracked and directed energy on a stationary target at a slant range of 1.4 km. (Slant range is the line-of-sight distance between two points at different levels. The data collected from the test, including impact of vibration, dust and rotor downwash, will help shape future high-energy laser systems.

"Our goal is to pull the future forward," said Art Morrish, vice president of advanced concepts and technologies for Raytheon Space and Airborne Systems. "This data collection shows we're on the right track."

For the test, Raytheon coupled a variant of the Multi-Spectral Targeting System, an advanced, electro-optical, infrared sensor, with a laser. The MTS provided targeting information, situational awareness and beam control.

Raytheon, alongside other OEMs such as Boeing, Lockheed Martin and Northrop Grumman, are developing laser weapon prototypes for the US Department of Defence.

The US Navy is leading the charge. In November 2014, a 30 kilowatt Laser Weapon System (LaWS) was demonstrated on board the USS Ponce. In 2012, LaWS downed several unmanned aircraft.The Office of Naval Research is also believed to be preparing to test a 150 kW weapon system in the near future.

ONR says navy leaders have made directed-energy weapons a top priority to counter what they call “asymmetric threats”, including unmanned and light aircraft and small attack boats that could be used to deny US forces access to certain areas. 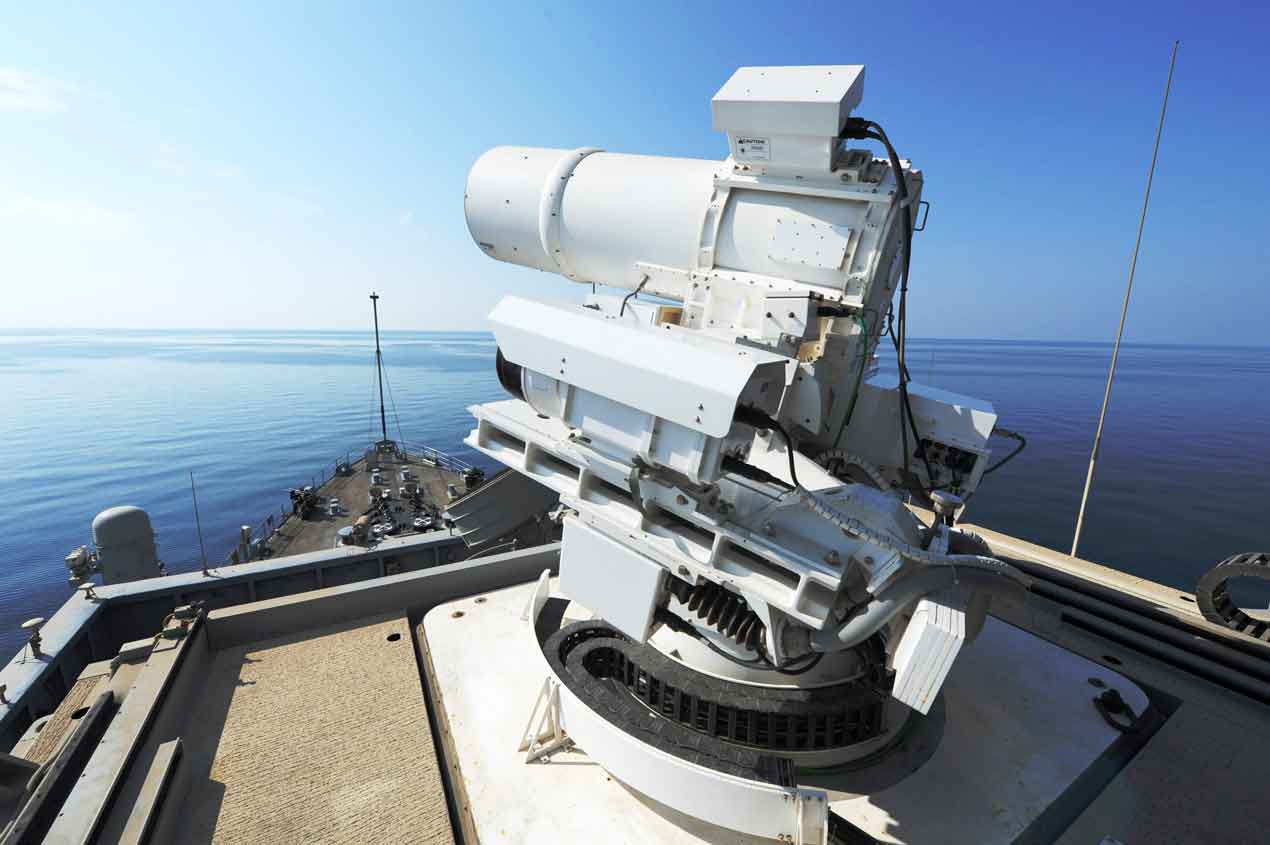 LaWS on board the USS Ponce
(Copyright: ONR)

Unlike conventional munitions, laser weapons have a much “lower cost per engagement ratio” and a limitless supply. They are also perceived to be better at taking down low flying targets such as drones or UAVs, as well as providing protection against large numbers of rockets and mortars.

Lockheed Martin has tested a 60 kW “combined fibre” laser system for the US Army Space and Missile Defense Command. The weapon could be installed on specialised US Army and Marines tactical military vehicles to take down off-the-shelf drones, which are being used by ISIL or Daesh.

"We have shown that a powerful directed energy laser is now sufficiently light-weight, low volume and reliable enough to be deployed on tactical vehicles for defensive applications on land, at sea and in the air," stated Robert Afzal, Ph.D., and senior fellow for Laser and Sensor Systems.

According to Afzal, the Lockheed Martin team created a laser beam that was near "diffraction-limited," meaning it was close to the physical limits for focusing energy toward a single, small spot. The laser system also proved to be highly efficient in testing, capable of translating more than 43% of the electricity that powered it directly into the actual laser beam it emitted.

In 2015, Lockheed Martin demonstrated a 39kW fibre laser weapon, ATHENA (Advanced Test High Energy Asset), which disabled the engine of a truck from a mile away.

MDA awarded contracts in 2016 to Boeing, General Atomics, Lockheed Martin, Raytheon and Northrop Grumman to produce concepts for a low power laser demonstrator. It plans to award contracts to two or more contractors for flight testing and integration by 2021.

The US Army’s Stryker Infantry Carrier Vehicle (ICV) has been modified with a laser for countering drones. The vehicle, called the Mobile High Energy Laser (MEHEL), was demonstrated at the 2017 Maneuver Fires Integrated Experiment at Fort Sill in Oklahoma in early April.