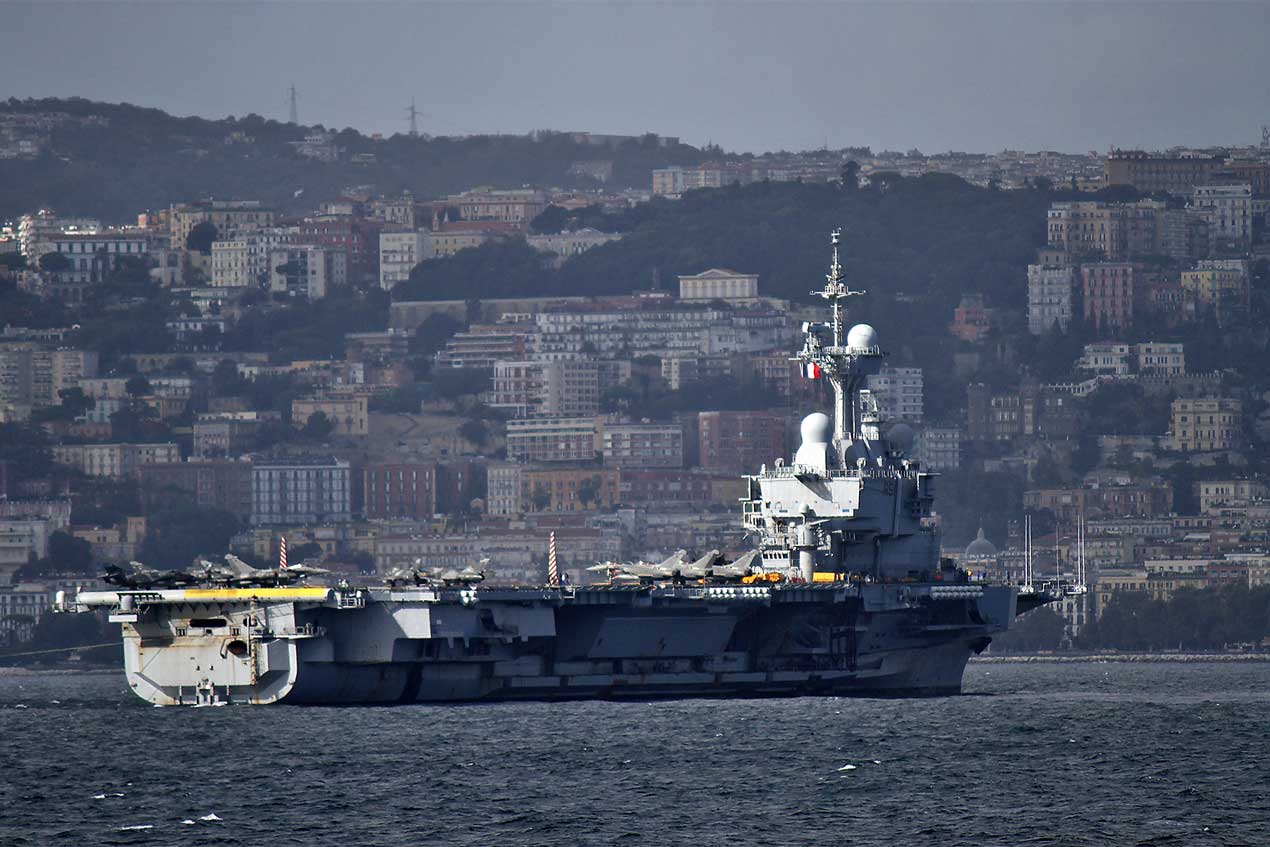 Coronavirus has struck again on board a naval vessel with more than 600 crew members from the French Navy's Charles De Gaulle aircraft carrier testing positive for COVID-19, according to media reports.

The outbreak on board the French ship follows news of the US Navy aircraft carrier, USS Theodore Roosevelt, being forced to dock in Guam on March 27 after crew members displayed symptoms of the virus. Approximately 600 sailors on board Theodore Roosevelt have since tested positive for COVID-19 and one sailor from the stricken vessel died from COVID-19 complications on April 13.

The French Navy initially reported between 40 to 50 positive cases on board the Charles De Gaulle after a medical team was dispatched via helicopter on April 8 to test sailors. According to reports, as a precautionary measure, three sailors, were reportedly evacuated from the ship the following morning to a military hospital in Toulon — the home port of Charles de Gaulle.

The carrier, which forms part of the French Navy's Carrier Strike Group, had been deployed on Mission Foch since January. The three-month-long deployment saw the ship involved in joint exercises with US and European forces in the Atlantic Ocean and North Sea, as well providing support to French forces in the eastern Mediterranean as part of Operation Chammal. It was believed to be on its way back to the Mediterranean when the outbreak occurred.

According to Naval News, masks were distributed to Charles De Gaulle crew members, common areas are cleaned twice daily and gatherings in living spaces have been minimized. Sailors showing symptoms of the virus are placed in isolated confinement, the report states.

But UK naval experts Defence Procurement International interviewed say safe distancing on board navy vessels is difficult to put into practice. “Working and living on board a ship entails being right alongside your colleagues most of the time,” says Clive Murgatroyd MBE, a former naval officer and Lecturer in Capability Management and Defence Acquisition for Cranfield Defence and Security, Shrivenham. “For example, in the operations room you are sitting next to each other, all doing important jobs. You have shared bathrooms, you eat together, social distancing would be very difficult.”

Even on board the Royal Navy's newest vessels, Murgatroyd says you would typically have 6 ratings in each sleeping area. The ventilation system on board, he says, adds to the problem, by making it easier for things like common colds and flu to spread among crew members.

“Everyone on board has a job to do, which means if you're short one or two people those jobs don't get done, or others have to stand in," says Murgatroyd. "If you are in a two watch system and you lose someone, how do you fill the gap?"

British military bases have received the same social distancing and washing of hands advice issued to members of the public by Public Health England.  The British Army said it has well-rehearsed plans in place for dealing with a whole range of health matters, and is using those to inform itsapproach on a daily basis.

The US Navy says everyone on naval vessels is screened before they come on board a ship. Navy Rear Adm. Bruce Gillingham, Surgeon General of the US Navy stated in March, those that appeared ill were not allowed on board and once a ship leaves port, it will not return for a period of 14 days or later so the Navy can ensure they are not inadvertently transmitting the virus. That policy, however, doesn't appear to have prevented an outbreak of the virus on board the Theodore Roosevelt which was on operations in the Philippine Sea and had made a port stop in Vietnam 15 days prior.

While the military are keen to emphasize that operations are continuing as normal, the global spread of coronavirus has caused major disruption to military exercises. US European Command drastically curtailed its participation in DEFENDER Europe 2020 in Antwerp, Belgium, a US-led multinational exercise, which would have seen the largest deployment of US-based forces to Europe for more than 25 years. An additional 17,000 US soldiers were scheduled to arrive in Europe to stress the system from a ground manouevre perspective during DEFENDER Europe, but that number has since been reduced to 5,000 to 6,000 soldiers.

The US Army put a domestic travel ban in place for personnel, with duty station moves and temporary assignments halted. However, roughly 1,200 recruits recently left for Basic Combat Training after officials had them on standby until a plan was set. First, recruits will be tested for COVID-19 at their military entrance processing stations before departing to one of four Army training facilities.
Once troops finish their training, they are screened again before they leave for another location.

Jens Stoltenberg, NATO Secretary General, said the alliance had implemented preventive measures to minimise the risks to personnel and the risk of spreading the virus. "We have done so by  implementing many of the measures that have been implemented in the rest of the society, with social distancing, washing hands and also reducing - adapting some of our exercises, cancelling some exercises and other preventive measures," he stated at a press conference following a virtual meeting of NATO defence ministers on April 15.

Some NATO military personnel have been infected and some are in quarantine, but Stoltenberg said this had not undermined the alliance's ability to react, its operational readiness, and ability to maintain missions and operations.

"We have made sure that the readiness of our forces is in place and that we can deploy troops, forces if needed." Stoltenberg said. NATO continues to maintain missions and operations, including battlegroups in the eastern part of the Alliance, air policing, naval deployments and missions from Afghanistan to Kosovo.