The US defence research organisation, DARPA, aims to develop scalable, modular, and affordable approaches that can be delivered within the next three to four years for countering small unmanned aircraft systems (sUASs).

Commercial-off-the-shelf UAVs such as those developed by Chinese company DJI, have been adapted by terrorist organisations such as ISIL to carry explosives to attack Iraqi and Kurdish forces in Iraq and Syria.

A DJI drone operated by a photographer also reportedly landed on the UK Royal Navy's new flagship aircraft carrier, HMS Queen Elizabeth. According to reports, the photographer was forced to land his drone on the carrier—which recently docked at Portsmouth Naval Base for the first time—due to strong gusts of wind. But no one on board the ship was any the wiser, according to reports.

The US is so concerned by the threat posed to military personnel, vehicles and installations by small UAVs that it recently expedited the development of counter-sUAS capabilities and their near-term introduction to the field.

DARPA awarded Phase 1 agreements for its Mobile Force Protection Program (MFP) to three teams, led by Dynetics, Saab Defense and Security USA and Syracuse Research Corporation or SRC. MFP aims to counter the proliferation of sUASs, including both  fixed- and rotary-wing aircraft.

“Each team will now work to integrate novel ideas for advanced sensors and neutralisation approaches into a common framework emphasising safety for civilian bystanders, ease of operation, and low size, weight, power, and cost. Our goal is a technology demonstration system that could fit onto currently deployed tactical ground vehicles and maritime vessels—getting advanced and upgradeable capabilities quickly to the war fighters who need them.”

To help speed development and facilitate interoperability of MFP’s capabilities, DARPA selected the US Army’s Maneuver Aviation and Fires Integration Application (MAFIA) service-oriented architecture as the common framework for the data-fusion engine, decision-aid algorithms, and user interface, as well as the backbone for the teams’ command and control (C2) software.

At the conclusion of each open-air demonstration, DARPA plans to offer the Services and other US government agencies, the opportunity to fund extended field evaluations of the current technology demonstration system.

DARPA’s goal is to develop the interim versions and the final prototype system to meet the needs of a broad number of potential government and commercial users.

The US Navy’s Office of Naval Research is looking to counter “asymmetric threats”, including unmanned and light aircraft, with directed-energy weapons, which it has made a top priority. 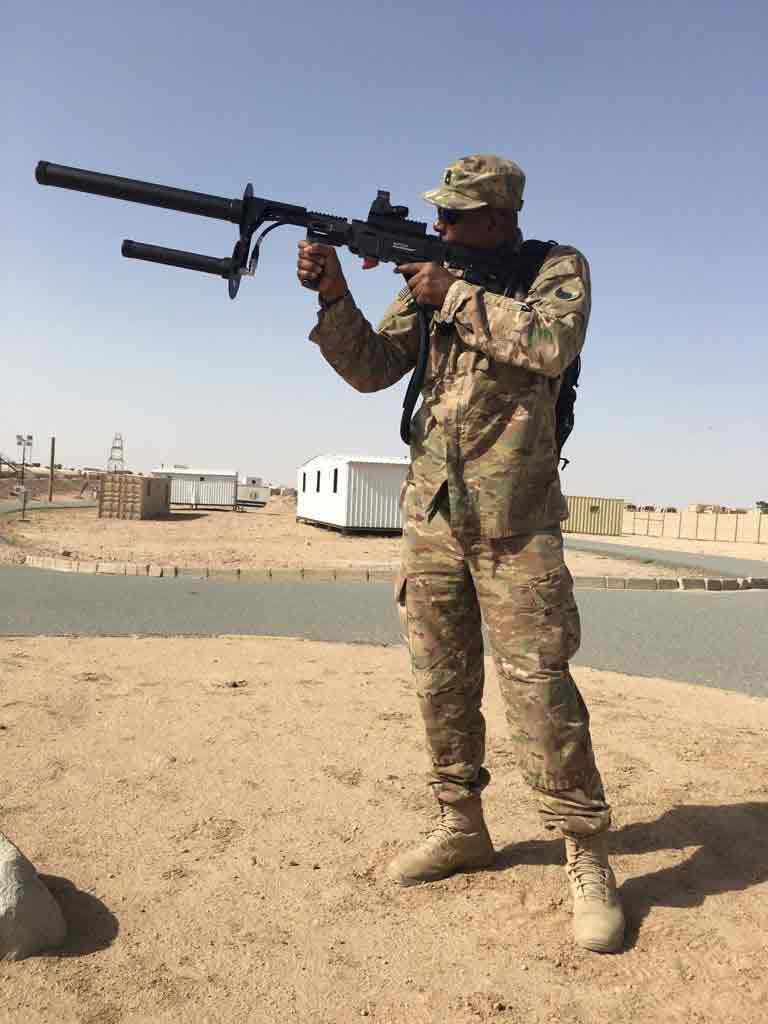 Soldiers train with the DroneDefender  (Photo by Capt. Nicole Vajda)

US military bases have been given permission from the Pentagon to “shoot down” or disable any drone that violates airspace restrictions over bases and is deemed a security risk.

US soldiers have been trained to use the DroneDefender, a point-and-shoot, electromagnetic, rifle-shaped weapon that disrupts communications between a remote-controlled drone and its operator. The system is considered a safer and more accurate alternative than shooting drones with a rifle.

“Pull the trigger and it falls out of the sky,” said Capt. Michael Torre, an Electronic Warfare Officer for the 29th Infantry Division and a 20-year National Guard veteran, when discussing the DroneDefender. “It reminds me of playing ‘Duck Hunt.’ It’s like using a video game controller with a real-world application.”