The Falco Explorer RPAS from Leonardo is aimed at both the civilian and military market. 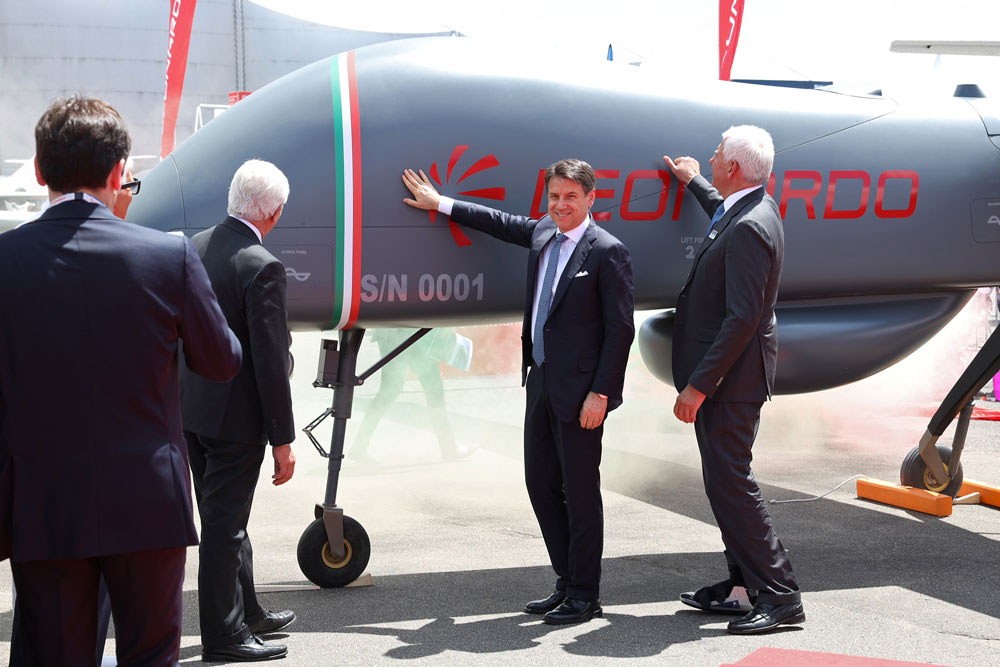 Leonardo has unveiled its largest-ever drone, the Falco Xplorer, at the Paris Air Show.

The latest addition to the Falco family of remotely-piloted air systems has a payload capacity of more than 350 kg, endurance in excess of 24 hours and a satellite communications capability for beyond- radio-line-of-sight operations, all within a 1.3 ton maximum take-off weight (MTOW).

The Falco Xplorer is also undergoing certification for flight in non-segregated airspace and will be targeted at civilian as well as military customers.

Everything is designed in-house by Leonardo, from the aircraft itself to the sensor suite, mission system and ground control station and the Falco Xplorer will be offered as both an integrated platform and as a fully-managed information-superiority service. In the latter model, Leonardo will operate the aircraft and its sensors and manage logistics to provide actionable information directly to the customer.

“Leonardo invests continuously in new capabilities to ensure we position the right products in the right markets”, said Leonardo CEO Alessandro Profumo, who presented the Falco Xplorer at its unveiling. “The Falco Xplorer is designed to be extremely competitive in its category, building on the experience we’ve gained working with Falco family customers over a number of years and our strengths in the unmanned domain. By understanding and being able to meet our customers’ needs, we expect to increase our share of the unmanned systems market.”

Earlier versions of the Falco — the Selex ES Falco — were sold to the Royal Saudi Air Force, although the UAV is also believed to be operated by Pakistan and has been used by the United Nations in operations in the Congo to monitor the movement of armed groups.

Leonardo says the Falco Xplorer has been designed from the ground-up to access the widest possible market. It is undergoing certification for flight in non-segregated airspace, meaning Leonardo will be able to pitch it to civilian customers such as coast guards and emergency responders as well as the military market. Because the Falco Xplorer system is entirely designed and manufactured in Europe, it is not subject to International Traffic in Arms Regulations (ITAR) restrictions and its technical characteristics place it within the Missile Technology Control Regime (MTCR) class II category. Together, these make the Falco Xplorer readily exportable around the world.

Following the unveiling, the new RPAS is expected to embark on its maiden flight in June from Trapani Airport in Italy. A series of trials will then take place throughout the year, capped off by a flight campaign with the platform’s fully-integrated sensor suite on-board. The RPAS could then be delivered to its launch customer as early as 2020. The drone will be certified according to NATO STANAG 4671, meaning that it will be readily approved to fly for NATO countries.