An all robotic solution with mobile sensors for port and coastal surveillance is unveiled at Milipol Paris. 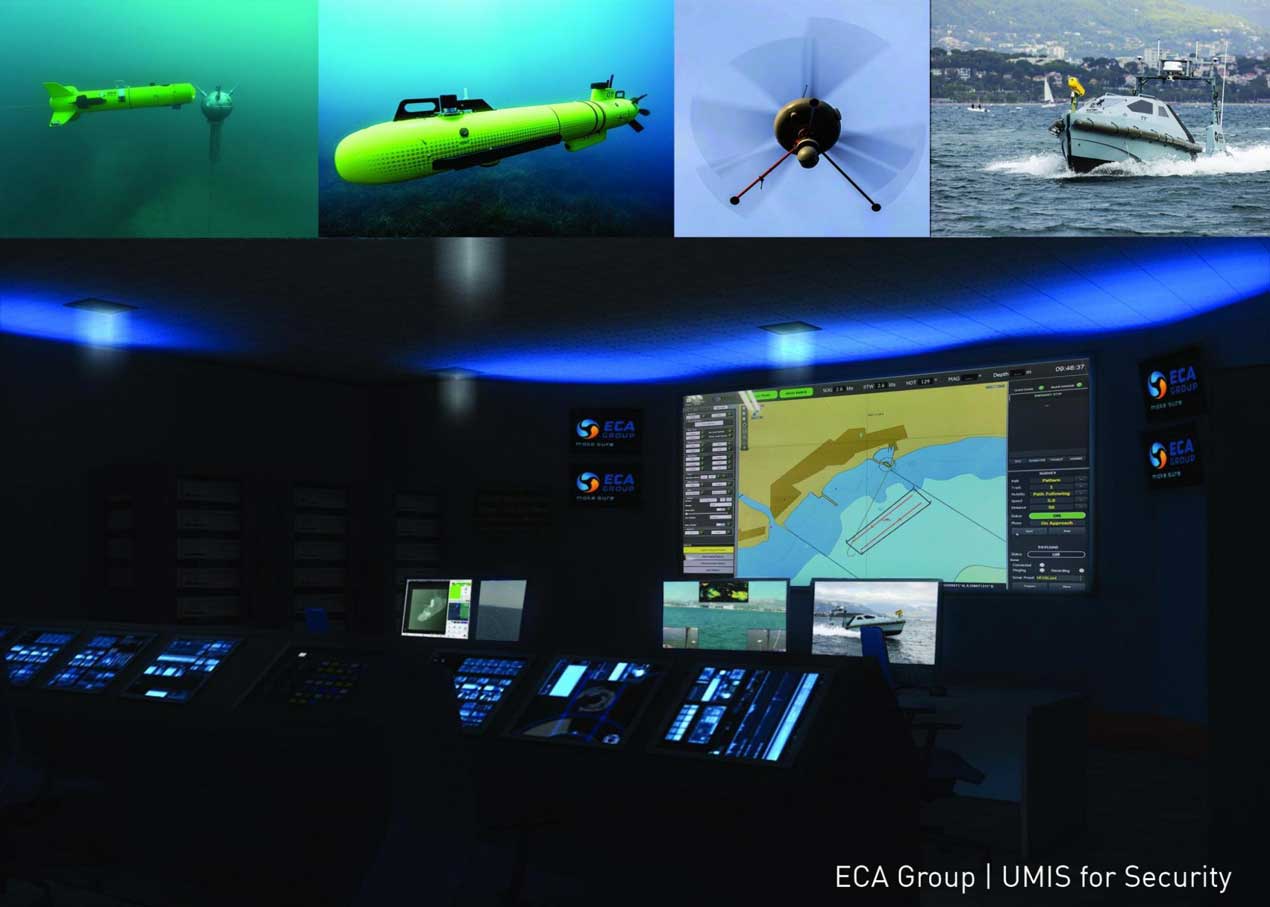 At MILIPOL Paris (21–24 November) 2017, ECA Group will unveil an all robotics solution with mobile sensors for coastal and port security.

In coastal and port security, radars and multifunctional cameras ensure permanent monitoring. However, the current system has its limits, says ECA Group, as it uses fixed sensors installed at strategic points on the monitored sites. The fixed sensors can be blocked by precipitous terrains and their functioning can be disturbed by bad weather. Their viewing range is also restricted.

Given that coastal protection starts at sea, anticipation is crucial. That’s where surveillance by mobile sensors embedded on robots comes in, says ECA. Its UMIS for Security solution deploys different types of developed robots for coastal and port security.

“To lift the limitations linked to the fixed sensors, ECA Group has designed solutions that make the sensors mobile,” explains Vincent Clavier, in charge of Homeland Security activity within ECA Group. “These solutions provide more precise and performant information with a wider viewing range. They can better detect dangers and generate alerts well in advance so that action can be taken at sea and infrastructures can be protected.”

ECA’s entire fleet of robots (USVs, UAVs and UUVs) can be regrouped, managed and co-ordinated with one single command post equipped with UMIS for Security.

"The real novelty of this software suite is its ability to integrate seamlessly into existing systems, its primary purpose being the supplementing of the already installed devices,” says Clavier. “The added value is its ability to supervise the fleet of sensors, to process and communicate information and to manage, operate and co-ordinate the robots’ tasks.”

UMIS for Security can be used to define surveillance zones, for  example, generate alerts, transmit commands and react before the threat reaches the zone requiring protection, and all of this without putting humans at risk.

ECA Group proposes three types of robots that can wear the mobile sensors. The main device is its Unmanned Surface Vessel (USV) INSPECTOR MK2, an unmanned boat, which can be remotely controlled or navigated in autonomous mode based on a pre-programmed itinerary.

"INSPECTOR MK2 patrols and controls sensitive areas equipped with a multi camera set-up, radars and effectors or other payloads to keep out intruders,” says Clavier. “The scope of surveillance and global detection is substantially increased in a sustainable manner while avoiding unnecessary or dangerous call-outs by response teams.”

The USV can also escort suspicious boats to the entrance of the port to collect as much information as possible and generate a warning provoking a response. In the most critical situations, for example if a weapon has been detected on board, the USV can be equipped with radars, visual or thermal cameras and transmit images in real time or other detailed information such as heat sources, biochemical or radiological components.

High impact deterrents can be deployed as well: water cannons, visual or acoustic projectors, and even lethal means.“The robots are going to try and defeat the threat,” says Clavier. “However, their purpose is to assist humans, not to replace them as critical situations should not be dehumanised.”

This equipment can be supplemented with an underwater robot, such as the A9-E or a remotely operated (ROV) like the SEASCAN.  These devices inspect the seabed along the coastline to verify whether it has been compromised by the dumping of mines and improvised explosive devices.

The third class of robot is the UAV IT180 aerial drone, which can carry out speedy reconnaissance flights and surveillance or inspection flights (chemical sensors, magnetometers).

ECA says the IT180 is stable, robust and resistant in bad weather conditions. It can be fitted with various payloads and take pictures with high-resolution cameras.

These different robots are complementary and work together to provide the operator with a complete status report. The operator can work safely from their “control tower” and act at a safe stand-off distance.

UMIS for Security is also available with a mobile command station. The system is installed in an equipped truck that can be deployed occasionally for specific call-outs, for example, the securing of an area where a large event or gathering is taking place.