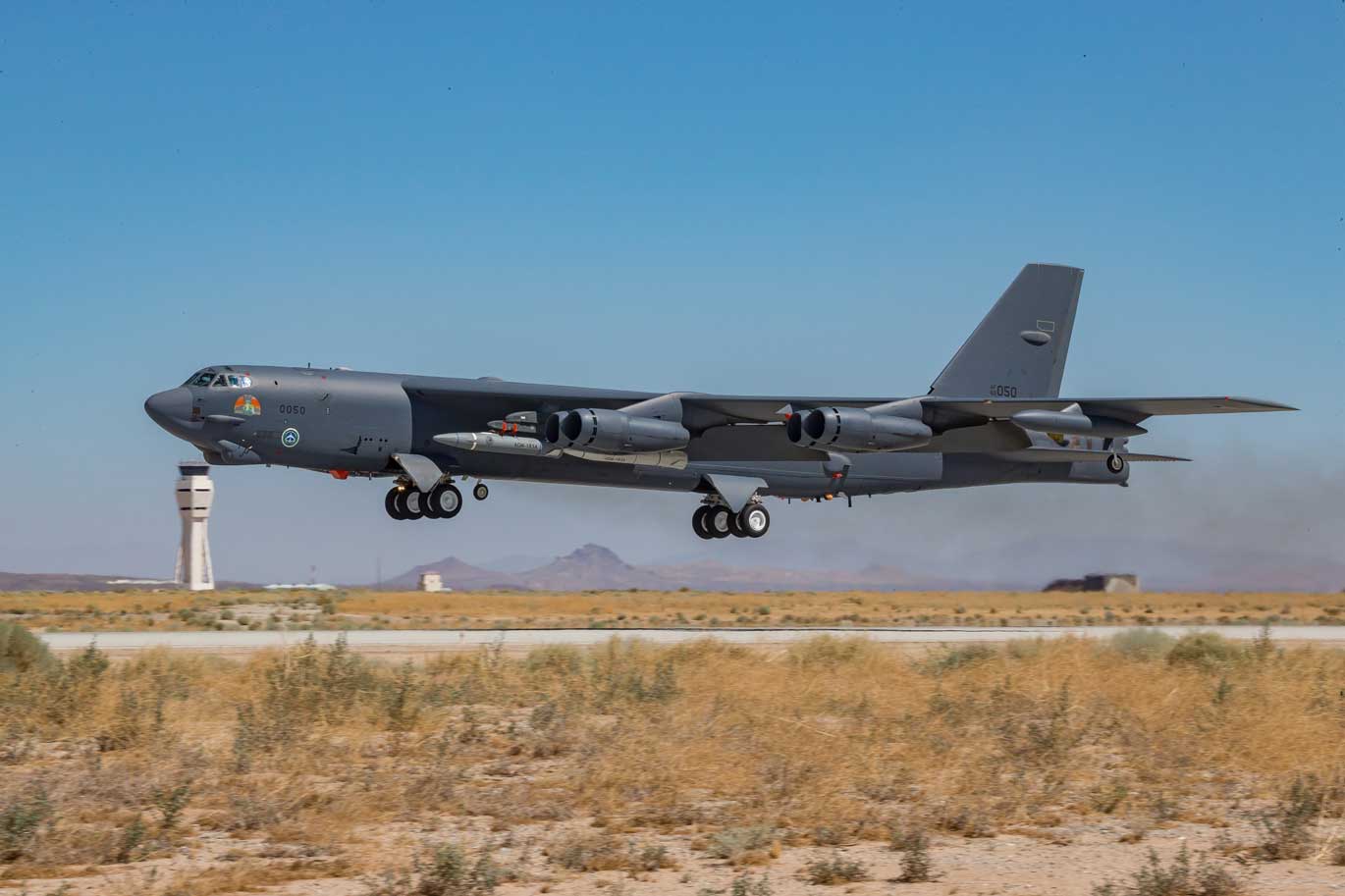 The hypersonic race among Russia, China and the US continues apace, with the US Air Force and Lockheed Martin recently announcing successful completion of a successful test flight of hypersonic missiles (Mach 5 or greater) at Edwards Air Force Base in California.

The test, which took place on August 8, saw the second AGM-183A Air-Launched Rapid Response Weapon (ARRW) tested on the Air Force's B-52 Stratofortress bomber out of Edwards Air Force Base, California, on Aug. 8, 2020.

The captive carry flight was conducted with tactical hardware and fully instrumented to collect thermal, mechanical and digital data from the flight vehicle. This is the first time a tactical ARRW missile has been assembled. Additional ground and flight testing will follow over the next two years.

“The event this week demonstrated the ability to communicate with the prototype weapon; the entire team is excited to take the next step and begin energetic flight test of our first air-launched hypersonic weapons,” said Lt. Col. Michael Jungquist, 419th Flight Test Squadron Commander and Global Power Bomber Combined Test Force Director. “These weapons will enable application of conventional firepower anywhere in the world at eye-watering speed.”

“The team overcame significant challenges driven by the Covid-19 pandemic to achieve this significant milestone for the programme,” said Dave Berganini, ARRW program director at Lockheed Martin Missiles and Fire Control. “This captive carry mission is the precursor for our first booster test flight planned for the early 2020s.”

US efforts are focused on developing hypersonic glide vehicles, which are launched from a rocket before gliding to a target, and hypersonic cruise missiles, which are powered by high-speed, air-breathing engines during flight.

Pentagon funding for hypersonic missile development has ratcheted up significantly in response to Russia and China developing similar weapon systems. Russia, who is believed to be at the vanguard of hypersonic weapon systems development, announced that the Avangard Hypersonic glide vehicle, which can reportedly travel more than 20 times the speed of sound, entered service in December last year. The Russian-made 3M22 Zircon anti-ship hypersonic cruise missile, which has a reported range of 1,000 km, will be fitted to the Kirov-class battlecruiser Admiral Nakhimov and the Pyotr Velikiy.

In response to Russia's increased activity in this space, the Pentagon's FY2021 budget request increased its allocation for all hypersonic-related research to $3.2 billion—up from $2.6 billion in  2020— and includes $206.8 million for hypersonic defence programmes.

"We are in a competition and must remain diligent in our efforts to stay ahead of our adversaries who are vigorously pursuing similar weapon systems,” said Gen. Arnold. W. Bunch, Jr., Air Force Materiel Command commander. “Across the enterprise, our research, acquisition and test communities are well-coordinated to deliver critical hypersonic capabilities for the nation.”

According to a US Naval Institute News article published earlier this year, the US Department of Defense has not yet made a decision to acquire hypersonic weapons, but is developing prototypes to assist in the evaluation of potential weapon system concepts and mission sets. It pointed to a lack of defined mission requirements for hypersonic weapons,

Lockheed Martin has played a significant role in the research, development and demonstration of hypersonic technologies for more than 30 years. The corporation has made significant investments in key technology and capability development. It claims to have deep expertise in the engineering of hypersonic systems and associated challenges through its work with manoeuvring re-entry vehicles, air-breathing engine design, avionics, and aero/thermal flight sciences.