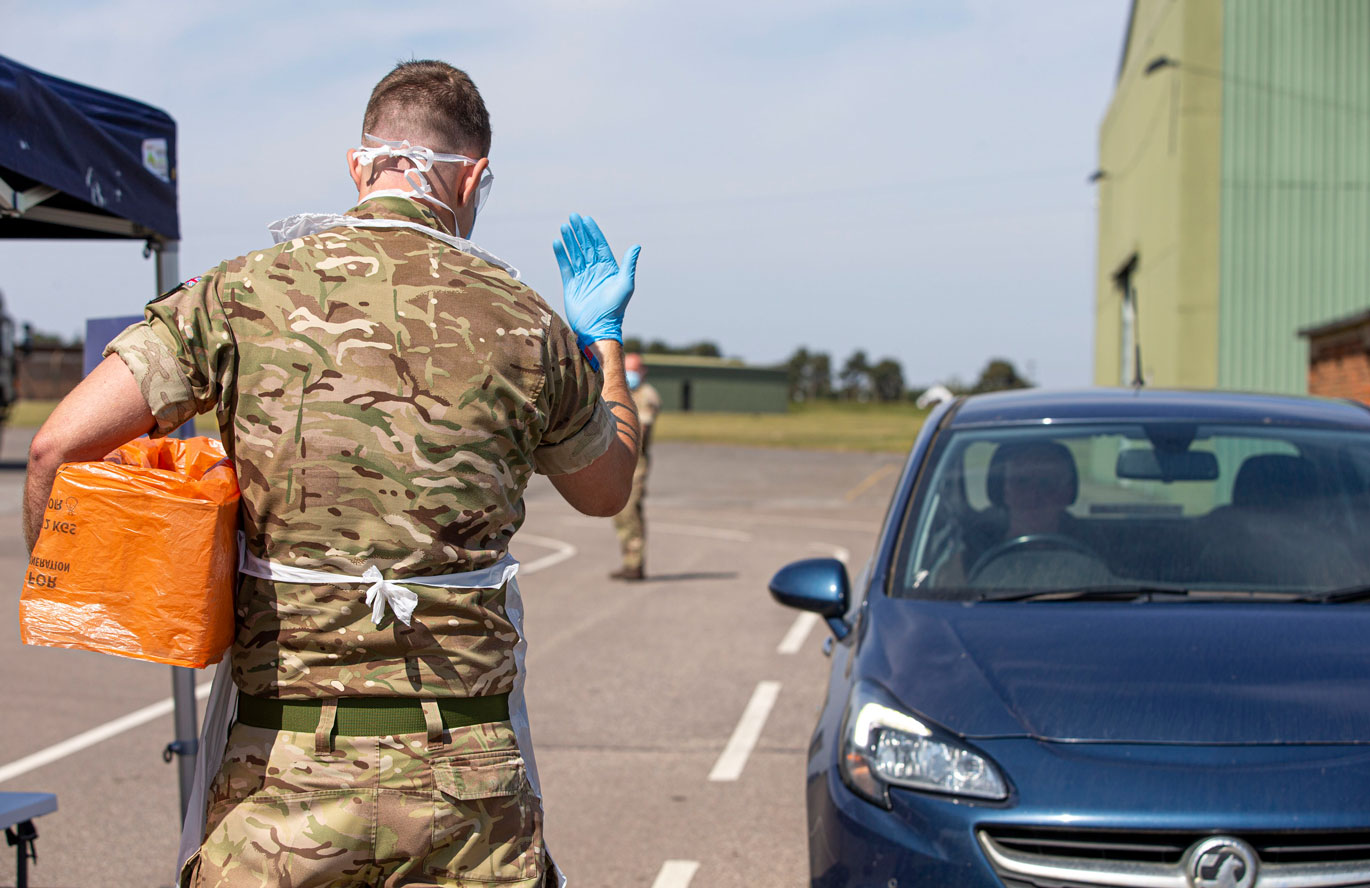 Military personnel will operate over 90 mobile testing units that will travel around the country to care homes, police stations and other areas with a high demand for testing (MoD/Crown Copyright)

British Army Royal Engineers have devised an innovative way of testing more essential workers for the Covid-19 virus. A network of more than 90 mobile pop-up testing units will travel the country to reach care homes, police stations, prisons and other sites where there is demand for testing. The units have been designed to clinical requirements by army engineers and can be easily set up in under 20 minutes.

The Department of Health and Social Care said the new mobile units will work alongside the drive-through test sites, together sending thousands of patient samples to the network of Lighthouse Labs, in Milton Keynes, Glasgow and Alderley Park in Cheshire, to rapidly increase the number of tests completed each day. The government has set itself the target of 100,000 tests a day by the end of April.

The number of new mobile units is being scaled up after a successful pilot last week, which saw Department of Health and Social Care vehicles refitted to fully functioning testing sites, following a design developed by the Royal Engineers of the British Army. Today, there are eight existing mobile units carrying out tests across the country, including Salisbury, Southport and Teesside.

Mobile facilities can be set up in under 20 minutes, allowing the testing of hundreds of people each day and are now travelling to those most in need and hard to reach. Specially trained Armed Forces personnel will collect swabs at the mobile sites, before they are sent to mega-labs for processing. Those tested will receive results within 48 hours.

Rapid expansion of a network of mobile test units is now underway, with new units being fielded in the coming weeks and at least 96 ready to be deployed by the start of May.

“What we're trying to do is help design the test system, so you match demand to supply,” General Sir Nick Carter, Chief of the Defence Staff stated at one of the government's daily coronavirus press briefings. “Innovative ideas like pop-ups will be a useful way of upscaling that capacity so we can get out to areas that are hard to reach. It will be very sophisticated once it's completed.” General Carter singled out Brigadier Elizabeth Faithfull-Davies, Commander of the British Army's 102nd Logistic Brigade, and her team as being very imaginative in the way they'd taken the mobile testing idea forward.

The UK Armed Forces have also provided assistance at Regional Testing Centres and helped deliver vital testing equipment to where it is most needed. At Edgbaston Cricket Ground in Birmingham, specialists from Boots Pharmacists are teaching military personnel how to conduct COVID-19 testing. Similar programmes are now up and running in Manchester and Glasgow.The military have also been involved in setting up logisitics networks for distributing Personal Protective Equipment (PPE) to NHS frontline staff.

Personnel at RAF Leeming in North Yorkshire are also currently beta testing a new mobile app, which could help prevent the spread of COVID-19. The test is led by the station’s innovative digital unit, RAF eXperimental (RAFX), which is working closely with the NHS and its partners.The app uses Bluetooth software to determine a user’s proximity to other devices. If a person shows symptoms or tests positive for the virus, they can choose to share this information with the NHS via the app. An alert is sent to other devices close by, whose users can then be tested or self-isolate. More than 300 personnel and their families at RAF Leeming are trialling the app on their phones.

RAF eXperimental is charged with driving innovation across the Air Force and were considered the obvious choice for testing the contact tracing app as they are used to beta testing new processes on a daily basis.

Between 3,000 and 4,000 members of the British military are actively involved in the response against Covid-19, with around 20,000 maintained at a state of high readiness. “It's been a whole force, not just of regular military from all the services,” said General Carter, “but also reservists, which make up some 15% of the force. It's involved defence civilians, contractors, scientists from Porton Down and something called the Engineer and Logistics Staff Corp where we bring in people from industry who work inside the military in times of crisis and provide expert support for how we might link into the civilian community to bring forward skills and indeed industrial support. The skills have been about planning, logisiticians, medics, engineers and IT, cataysing, designing and supporting.”

General Carter singled out the work of Army reservist Major Ebb Mukhtar, whose day job is working as a logisitics expert running Google's transport network across Europe, North Africa and the Middle East. Major Mukhtar is working as part of a supply team on how to distribute PPE more effectively. “He has designed an e-portal in partnership with Ebay, which will in due course manage individual customers and a bulk supply chain for distribution of PPE to all NHS regions and trusts,” said General Carter.

He said the Covid-19 response was the single greatest logistic challenge the military had faced in his more than 40 years of military service. “To give you an idea of the scale of the problem,” he said, “in 25 days since we started working together with the NHS, they've gone from 240 customers they deliver to normally, to nearly 50,000 customers. This has involved creating 260,000 sq feet of distribution warehousing, nearly four football fields worth, and some 38 additional delivery routes per day, equivalent to driving three times around the world, which is a major logistics challenge.”

Despite the key role the British military have played in the government's Covid-19 response, some have said the military should have played a more prominent role much earlier on. Speaking to Channel 4 news, Conservative MP Iain Duncan Smith, said the “military should be bound into this, and in some cases, I would say take charge of it.”