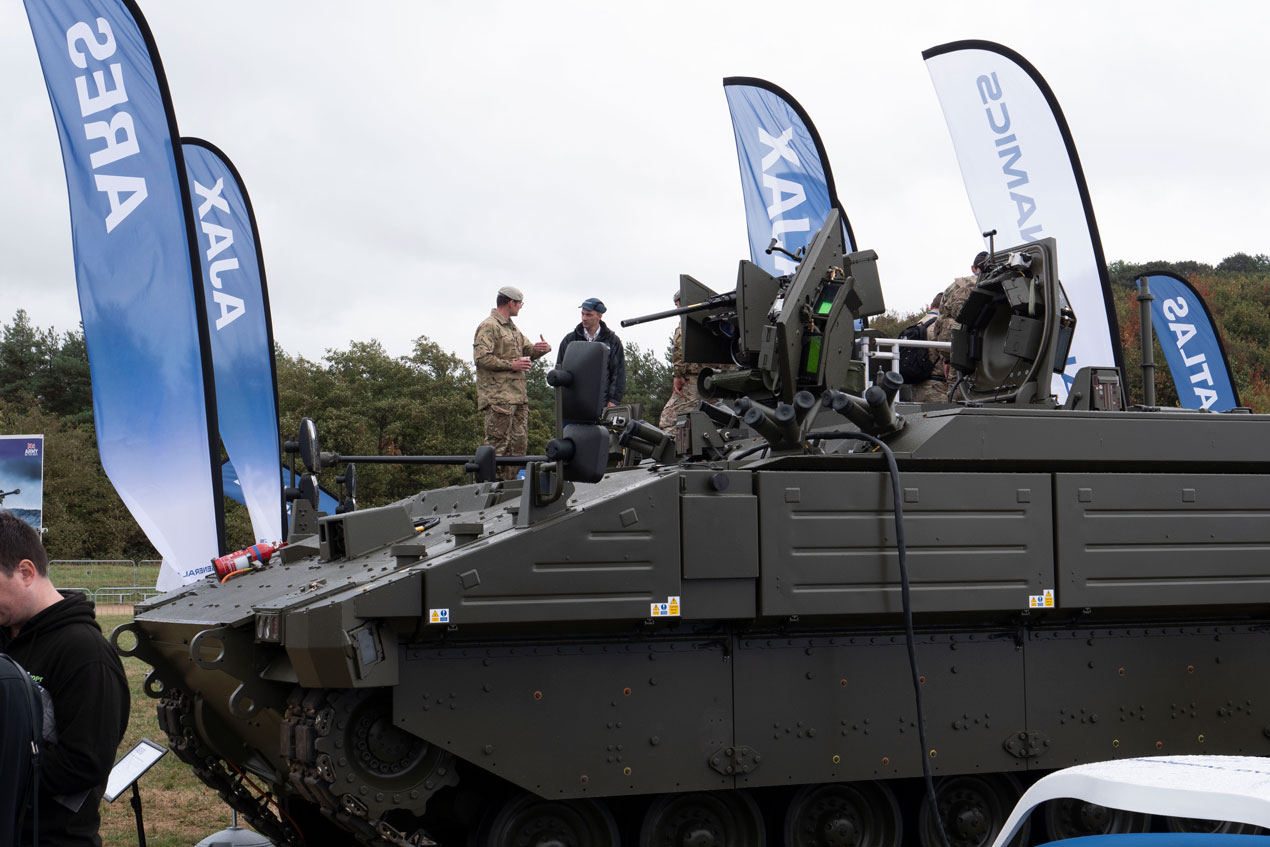 Four variants of AJAX were on display at DVD2018 (Photo: Anita Hawser)

Lockheed Martin UK is under contract to manufacture, test and certify 245 turrets for the reconnaissance variant of the AJAX fleet. With the first eight turrets now successfully delivered, the production rate at the company’s facility in Ampthill, Bedfordshire, will steadily increase, with full rate production being achieved during 2019.

Lockheed says the AJAX turret offers soldiers unparalleled situational awareness and includes the new CT40 weapon system. The CT40’s enhanced capabilities make it the most capable medium-calibre cannon in the market. It comes with a fully stabilised 40 mm cased telescoped cannon that allows rapid selection and firing from a range of ammunition effects and is capable of firing on the move. It engages further away than its equivalent 30 mm, it engages faster, and uses significantly less rounds to achieve the required effect.

Announcing the achievement at DVD2018 in Millbrook, Alan Lines, vice president and managing director of Lockheed Martin’s Ampthill site, said: “We delivered the first turret in March, followed by a further seven turret deliveries in recent months, and two more are now ready to be shipped. The build rate is now ramping up as we move towards full rate production.”

The fully digitised turrets have been designed and developed by Lockheed Martin’s engineers at the company’s Bedfordshire facility, which is home to a multi-million pound manufacturing capability.

“AJAX is the UK’s biggest order of armoured vehicles in a generation, supporting thousands of jobs across the country and modernising our frontline fleet,” said Defence Minister Stuart Andrew. “Having been expertly produced just a few miles away in the same county, it is apt that this first batch of turrets have been delivered in time for Bedfordshire’s Army showcase, marking another step towards bringing these vehicles onto the battlefield.”

The AJAX turret shares commonality with the upgraded turret developed by Lockheed Martin UK for the Ministry of Defence’s Warrior Capability Sustainment Programme (WCSP). Lockheed Martin UK is the prime contractor for the WCSP programme, which is currently in its development phase.