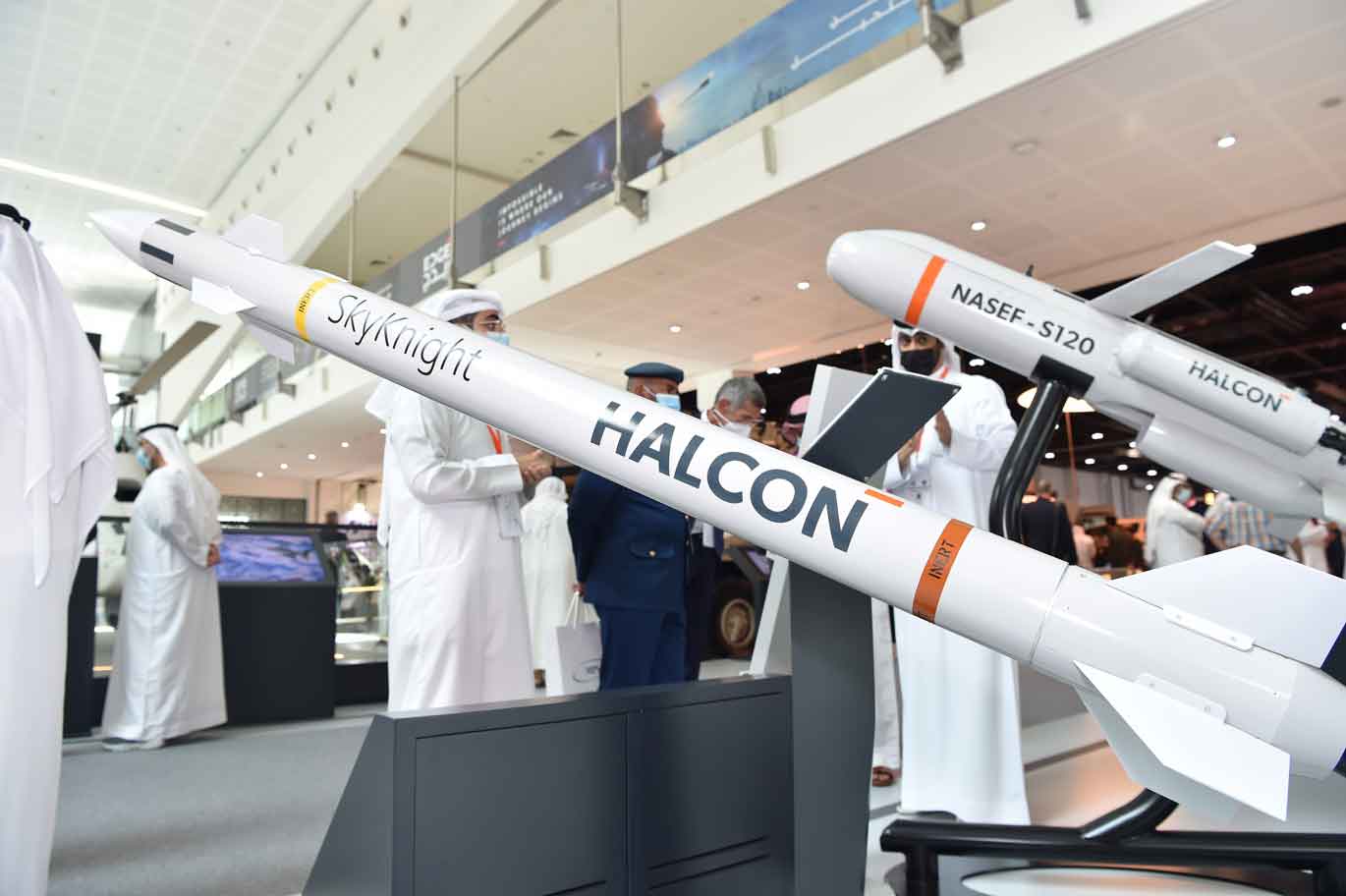 UAE-manufactured and designed weapon systems and industrial partnerships dominated the second day of the IDEX exhibition in Abu Dhabi.

The EDGE Group, parent company of HALCON, has been developing a short-range air defence system, as has Germany-based Rheinmetall AG, which was actively seeking a missile system to form part of its Skynex air defence system. The companies decided to jointly offer a solution, with HALCON providing SkyKnight, the missile system to the highly regarded Oerlikon Skynex Air Defence System, which sets new standards with its unique open architecture.

H.E. Faisal Al Bannai, EDGE Group CEO and Managing Director said SkyKnight is one of several tremendous achievements announced as part of the nation’s aim to establish sovereign defence capabilities, and with the goal to address ever-evolving threats that are not well covered by many players in the market. “This collaboration is a clear message that EDGE is open to teaming up with various players to offer joint advance solutions,” he stated.

EDGE Group, which brings together more than 20 UAE-based companies in the defence and security realms, was formed in 2019 as part of the UAE's efforts to diversify its economy and to build a local defence industrial base, thereby reducing its reliance on imports of defence and security equipment from abroad. Within just two years, EDGE has managed to assert itself on the regional stage developing a wide range of sophisticated defence and security systems, which previously it would have had to procure from Western companies.

HALCON says its C-RAM missile is capable of tracking and neutralising numerous, multi-directional incoming targets at one time, providing protection for static assets, as well as for mobile and mechanised forces. Transportable and mobile, the system can be deployed fixed on land, sea and moving land platform.

Rheinmetall, through its Swiss subsidiary, Rheinmetall Air Defence, has deployed the Skyguard system in numerous countries, which can bring down fast, small targets, and is used as the inner tier of layered air defence of vital points and critical military infrastructure. Countries that have rolled out Skyguard systems will ultimately upgrade to Skynex, placing HALCON, its SkyKnight C-RAM missile system, and the UAE at the forefront of air defence system innovation.

On the sidelines of the show, EDGE also signed an MoU with Lockheed Martin to explore opportunities across the UAE's aerospace and defence sector.

Under the terms of the agreement, the leading advanced technology firms will enhance their longstanding strategic partnership by establishing joint working groups to identify and develop industrialisation and knowledge transfer programmes. Under review will be projects related to in-country capability-building, the creation of innovative and emerging technologies, and the continued expansion of human capital development initiatives.

“At EDGE, we place a strong emphasis on joint collaboration, and are continuously seeking to build our capabilities to be able to offer the next generation of talent an environment to thrive, innovate and develop at the cutting-edge of technology,” said Khalid Al Breiki, president of the Mission Support cluster of EDGE Group.

Lockheed Martin has been a trusted partner to the UAE for more than 50 years Today, the company’s presence in the UAE has moved beyond defence systems to provide various products and services, technical support, and educational expertise to strengthen the defence industry and further expand in-country capabilities.