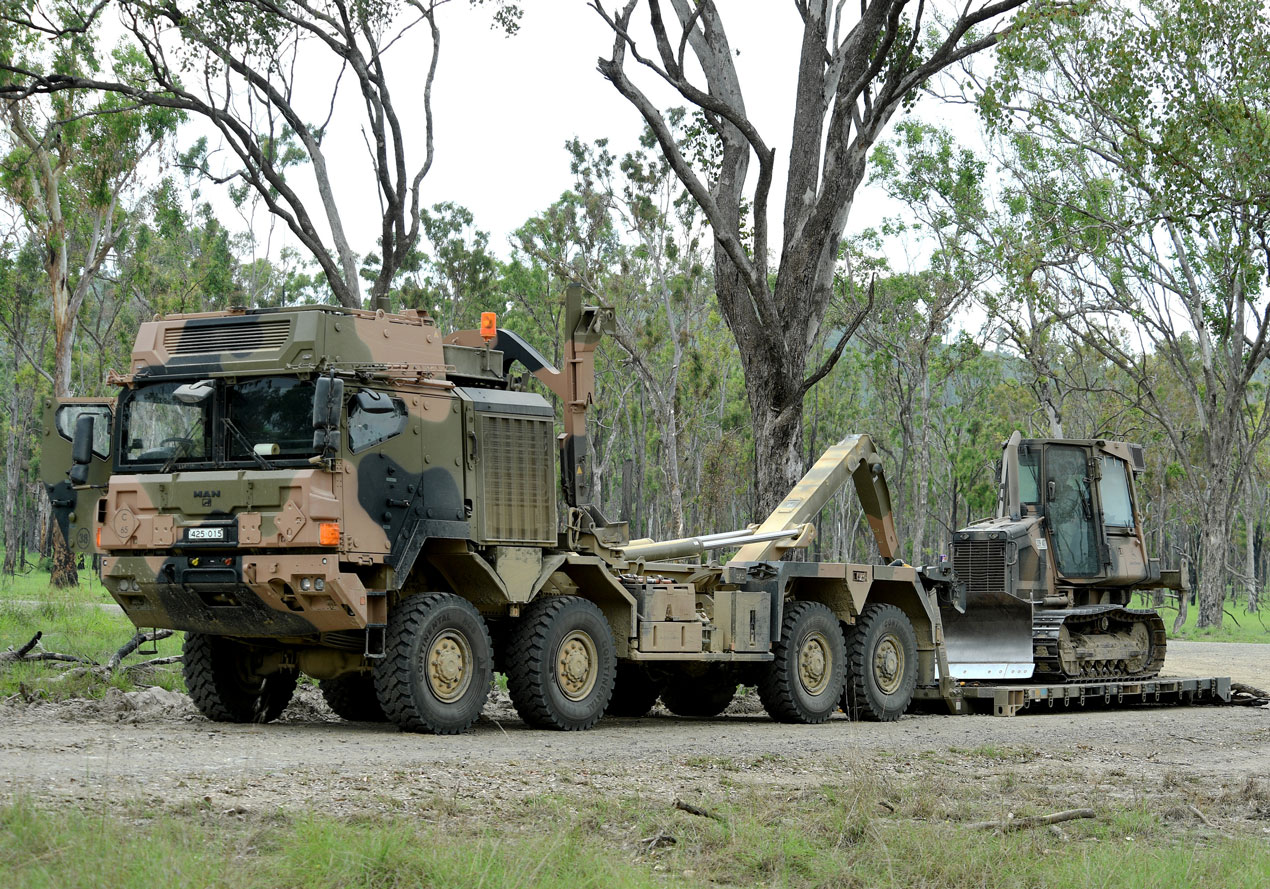 A Truck Integrated Load Handling unloading Flatrack with Dozer on exercise at the Combined Arms Training Activity in November 2017  (Photo:Commonwealth of Australia, Department of Defence)

Australia has declared Initial Operating Capability (IOC) status for the LAND 121 Phase 3B programme. The Australian Minister for Defence Linda Reynolds made the announcement in mid-February.

The four-year Land 121 Phase 3B contract commenced in April 2016 and focused on the delivery of a fleet of 2,536 vehicles in multiple configurations to form the logistics backbone of the Australian Defence Force. These vehicles will replace the current fleet of Unimog, Mack and S-Liner trucks which have been in service since the 1980s.

A contract was signed with Rheinmetall MAN Military Vehicles Australia to deliver and support 2,536 medium and heavy trucks and 3,054 modules.  Deliveries to Australian Army facilities around Australia are due to be completed by April 2020 according to the Land 121 Phase 3B program schedule.

The Australian Department of Defence said the new vehicles will enhance performance and protection for the ADF’s training and logistic support capability by providing uniformity throughout the fleet. Approximately 40% of the vehicles delivered under Phase 3B will have protected (armoured) cabins to protect against ballistic and blast threats. Every truck will be fitted with military radios and the ADF’s Battle Management System as part of the Army’s move to a digitised capability.

“The progress of the Land 121 Phase 3B program at this important milestone is testament to the strong working relationship between Rheinmetall and the Commonwealth,” said Rheinmetall Defence Australia managing director Gary Stewart. “Together, we are delivering the most protected, mobile, reliable, versatile and cost-effective vehicles in their class to the Army and the wider ADF and ensuring the safety of Australian soldiers.”

The vehicles included under the Land 121 Phase 3B programme and delivered to the Australian Army to date include the following variants:

“These vehicles combine Rheinmetall’s expertise in survivability and mission-specific equipment with MAN’s high-end automotive components and driver assistance systems, together with mission-specific high-tech components from a network of Australian industry partners,” Stewart said.

Australian industry capability (AIC) is a critical part of the Land 121 Phase 3B program, particularly during the integration and delivery of the vehicles to the Australian Army. Rheinmetall said the commitment to AIC will be underscored during the next phase of the programme - Land 121 Phase 3B/5B - which will see Rheinmetall deliver a further 1,044 vehicles and 872 modules, as well as ongoing support to ensure it meets operational requirements, working alongside its growing network of Australian industry partners.

Around 10,000 of Rheinmetall MAN vehicles are in service worldwide. Among current user nations are the United Kingdom, Germany, Denmark and New Zealand, Australia, Sweden and Norway.