The Barys 8x8 has undergone a series of tests in severe winter conditions ahead of acceptance by Kazakhstan's Armed Forces. 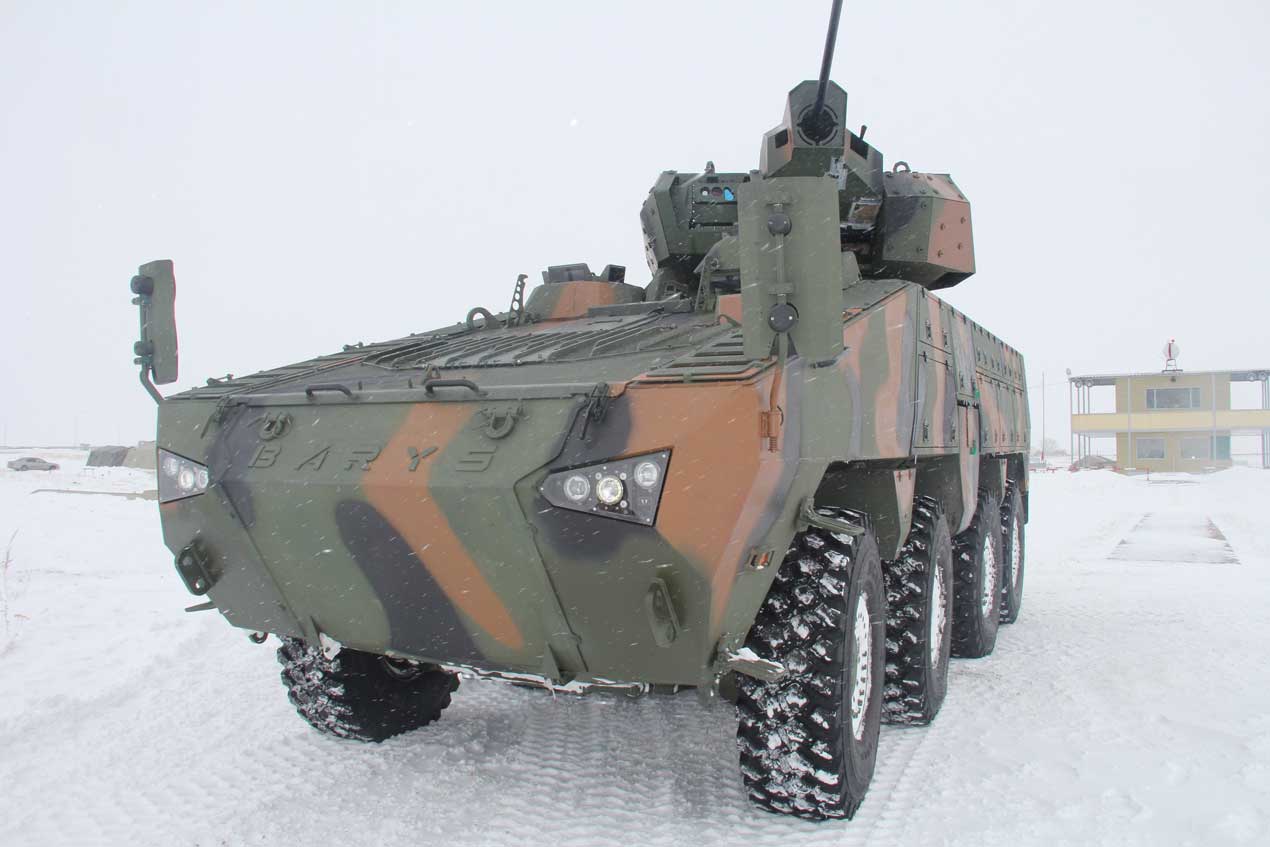 The Barys 8x8 is based on Paramounts Mbombe 8

Kazakhstan’s Ministry of Defence is in the final stages of evaluating Kazakhstan Paramount Engineering’s (KPE) Barys 8x8 combat vehicle, ahead of acceptance into service by the country’s armed forces.

The Barys (Snow Leopard in the Kazakh language) which is based on Paramount Group’s Mbombe 8, was developed to meet the increasing demand for multi-role, high mobility and mine hardened platforms.

Winter trials of the Barys 8 started during early December 2017 with a series of intensive factory acceptance tests to finally evaluate and optimise the complete weapon system, platform and turret. The trails were conducted at a military tank test polygon in central Kazakhstan.

Johan Delport, director of the KPE factory in Astana said: “The most severe winter conditions prevailed during testing, similar to conditions found in Siberia. During this period, the temperature dropped to -45 Celsius with a chill factor of minus 60 Celsius, resulting in serious challenges to man and machine while conquering up to 750 mm of soft snow.

“During such conditions, every smallest detail and subsystem could be evaluated extensively. Items such as glass heating for de-ice and de-misting, engine heating before starting, batteries, cabin heating, electrical functions, steering and suspension were successfully tested. The vehicle performed exceptionally throughout the trials.”

The vehicle’s design allows for a large array of weapon systems to be fitted. The weapon system was evaluated during both day and night firing sessions, static as well as firing on the move using the stabilisation mode. The 30 mm canon which has a range beyond ,2000 meters, was demonstrated successfully in severe ambient conditions.

Ivor Ichikowitz, founder and executive chairman of Paramount Group said: “Building our combat vehicles through local partnerships in Kazakhstan shows that we can produce highly advanced technologies anywhere in the world. One of the most significant trends in today’s defence industry is the increasing requirement of sovereign nations to develop their own defence equipment.

“Building defence industrial ecosystems, inside our customer countries, through strategic alliances have been the cornerstone of our industrial philosophy. Our partnerships have driven innovation, technology transfer, local manufacturing, skills development and jobs around the world.”

The Barys 8 is the winterised version of Paramount’s Mbombe 8, which Paramount says employs an new form of construction to give unprecedented levels of protection. The 8x8 also draws on the company’s experience of designing the highly advanced Mbombe family of armoured vehicles.

The Mbombe family of 4x4, 6x6 and 8x8 vehicles share more than 80% of common components to reduce through life costs.

In addition to the Barys, KPE has ramped production and deliveries of the Arlan (the localised version of Paramount Group’s Marauder APC) to armed forces in Kazakhstan. In November 2017, Paramount Group delivered more Arlan armoured vehicles to Kazakhstan's Special Forces. The latest delivery of the Arlan will see the vehicles in operation with the Ministry of Defence, Special Forces and other law enforcement agencies.