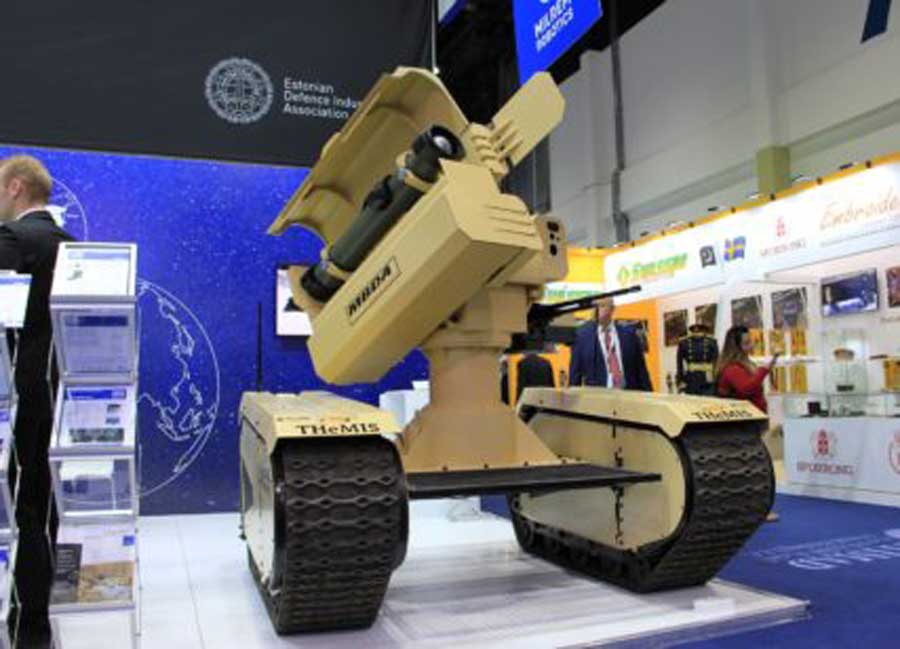 MBDA and Milrem Robotics are showcasing an anti-tank unmanned ground vehicle (UGV) at IDEX 2019, in what they say is a world's first.

ADDER was tested by the Estonian Defence Forces. The PROTECTOR, launched in 2017, featured one of Kongsberg’s remote weapon stations.

Now the joint project with MBDA will see the THeMIS fitted with MBDA's IMPACT (Integrated MMP Precision Attack Combat Turret) system fitted with two MMP 5th generation battlefield engagement missiles and a self-defence machine gun. The MMP replaces the Milan and Javelin anti-tank missiles of the French Army and Special Forces as well as the Hot missile in use in French cavalry units. It is a lightweight “fire-and-forget” missile with a 4km + range, featuring a dual mode seeker (uncooled infrared and visible colour channels).

“This combination of two of the most modern technologies in their field is a very good example of  how robotic warfare systems will bring disruption to the battlefield and make some traditional technologies obsolete,” said Kuldar Väärsi, CEO of Milrem Robotics. “Our unmanned land combat system under study, together with MBDA, will be very efficient in keeping our troops safe and significantly increasing the capability to fight main battle tanks as well as any other ground target."

Väärsi says weaponised robotic systems are the next generation of warfare, which will provide a new level of fire power and most importantly keep our soldiers at a safe distance. Despite the rise of robots on the battlefield, Väärsi says they will be remotely controlled by human operators, who will continue to make all the important decisions.

Soldiers can deploy the UGV while remaining at a safe distance and using a wireless or a tethered connection. The system will have a low heat and noise signature so it can stay unnoticed until completing its mission.

Being delivered to the French Army since the end of 2017, the MMP system is now deployed by the French forces in theatre, where it replaces the Milan and Javelin missiles. With fully digitalized functions of observation, targeting, positioning and guidance, the MMP system is perfectly suited for integration on vehicles, including remotely operated ones” said Francis Bordachar, Military Advisor Land Products at MBDA.