An unmanned ground vehicle is used for the first time by Estonian troops in Mali. 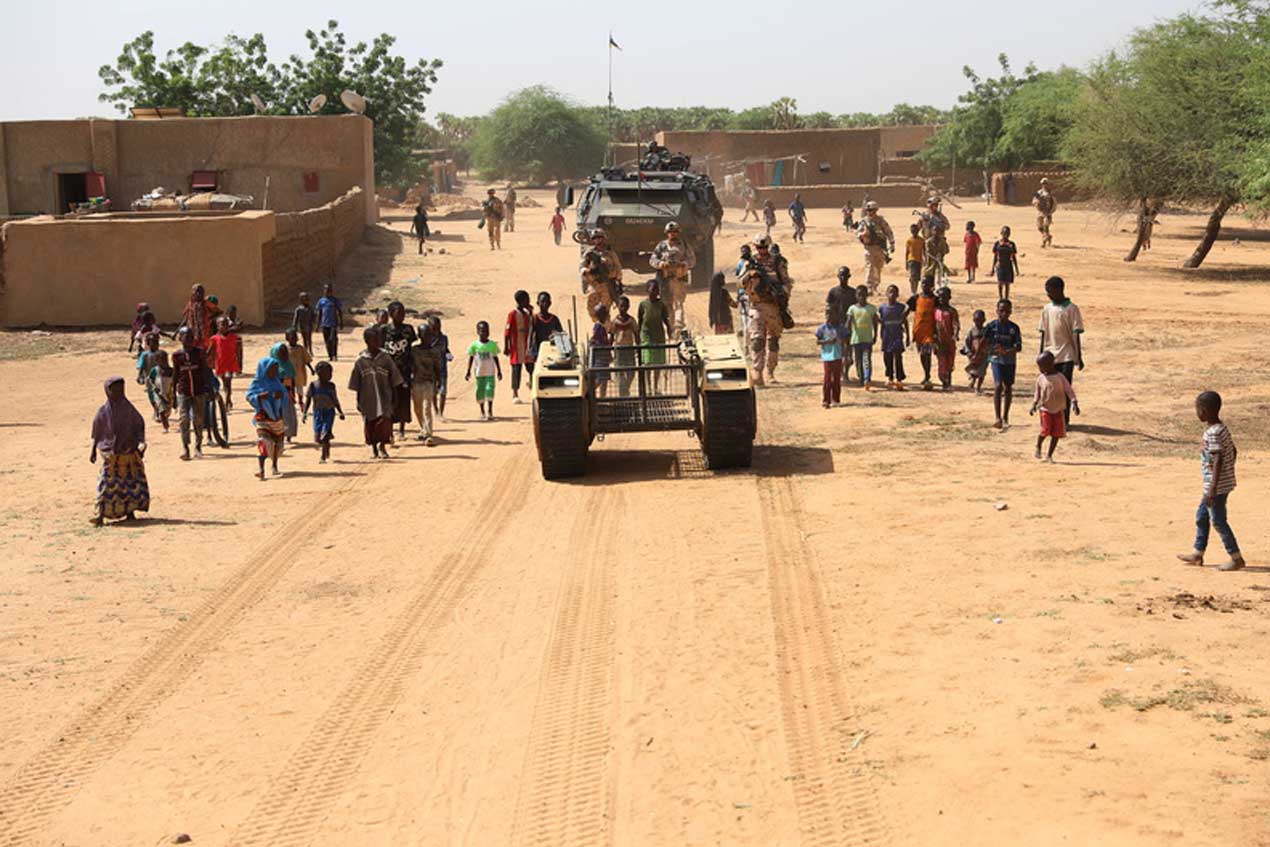 Locals marvel at Milrem Robotics' THeMIS UGV as it makes its way through their village in Mali, where temperatures can reach 50 degrees centigrade in the shade
(Photo courtesy of Milrem Robotics)

An Estonian infantry platoon has deployed a Milrem Robotics’ THeMIS unmanned ground vehicle (UGV) on patrol for the first time in Mali. The UGV was deployed by the Estpla-32 infantry platoon during a military operation, which will test its implementation in support of infantry in a conflict area, from both a tactical and a technical point of view.

THeMIS is a multi-purpose tracked vehicle that can be equipped with a range of different combat systems. The THeMIS in Mali can be used for support and observation. The vehicle can transport equipment such as water and ammunition, and thanks to its cameras, increase situational awareness and allow for an overview of dangerous areas without endangering soldiers.

“Deploying an unmanned vehicle will allow units to increase their combat power, as it reduces the physical load to soldiers and allows additional supplies to be included in an operation such as heavy weaponry, additional water and ammunition, which could not be transported without the vehicle,” said 2nd Lieutenant Madis Pärnpuu, second-in-command of Estpla-32. “We are currently using the UGV on patrols to identify and eliminate both technical and procedural bottlenecks, and test different ways of using it and integrating it into our tactics,” he added.

In the past, THeMIS has been used to transport equipment needed by the unit in Mali both at and near their base.  Mali is one of the toughest regions in the world with lava rock soil, loose sand and high temperatures that can reach 50 degrees in the shade. Such conditions test the capabilities of the TheMIS, but also other technology available to units like radio stations and GPS equipment. Despite the difficult circumstances, the THeMIS has proven itself reliable.

“Mali is the perfect place to test new technology. In addition to supporting our troops, we have received a great deal of valuable feedback from Operation Barkhane on the reliability, ease of use and tactical use of the vehicle,” said General (Ret) Riho Terras, President of the Defence Division of Milrem Robotics. The company will use the information collected from Mali for further development to improve the UGV and make it an even better tool for dismounted units.

Milrem Robotics' THeMIS is currently the only tracked UGV of its size class deployed in the operational area. Milrem Robotics’ UGVs will also support the Mali mission in 2020. The video below shows locals marvelling at the robot as it makes its way through their village. (Please note there is no English translation available for the video).