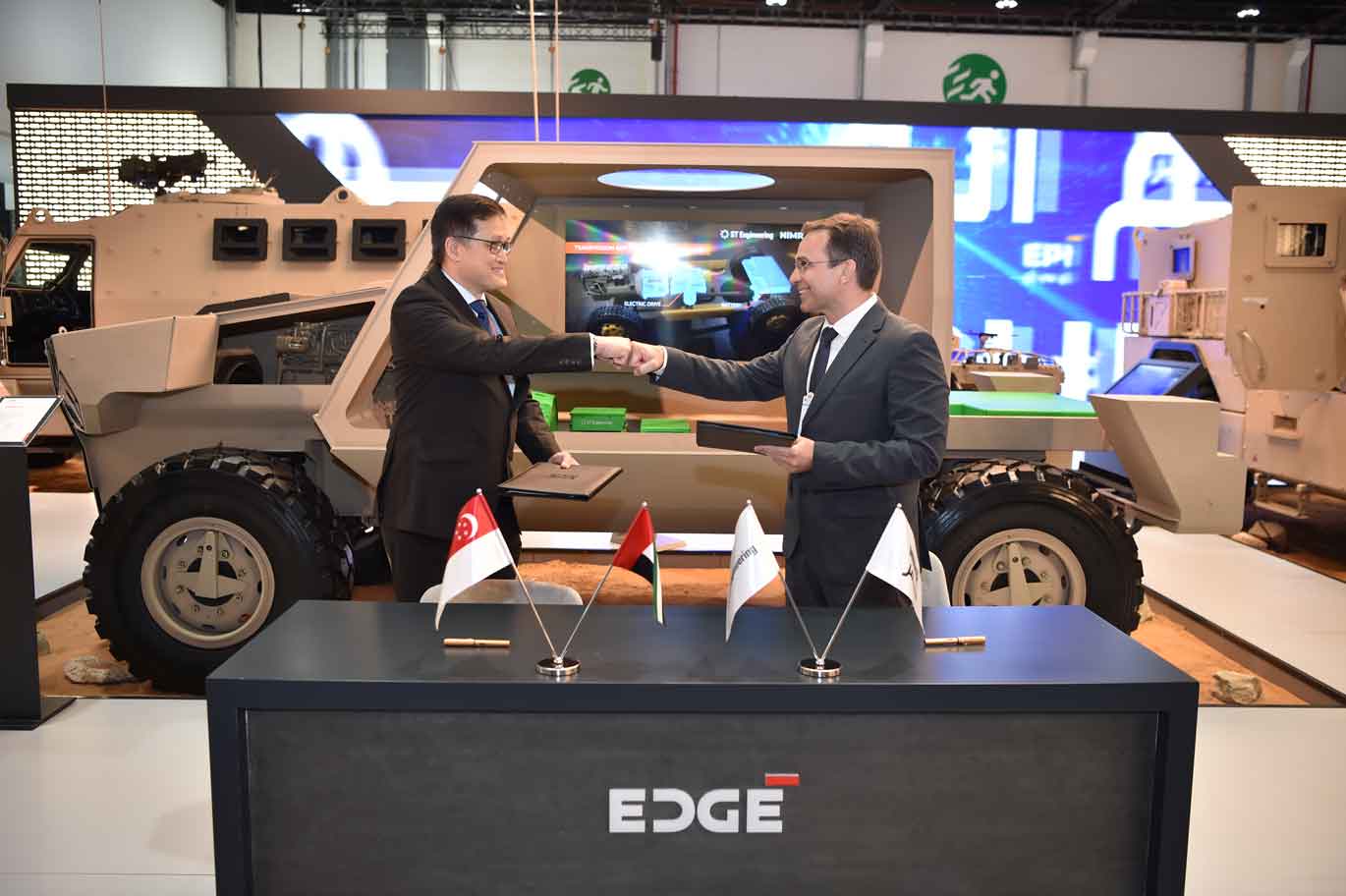 The UAE vehicle manufacturer aspires to be the first manufacturer in the Middle East region to integrate the game-changing power systems, which ST Engineering originally designed for commercial systems.

The MOU will see the study and design of HED components for NIMR vehicles. Besides offering improved range, acceleration and stealth capabilities, the HED systems also provide sustainability benefits such as lower emissions, compared to a typical diesel engine system. The decisive advantage of HED systems is that they are much quieter than conventional engines, a crucial requirement for silent watch operations and covert manoeuverability in combat operations.

Alongside delivering multiple technical and operational enhancements, the introduction of hybrid technology is set to ultimately reduce military reliance on fossil fuels—a step that aligns seamlessly with the UN’s Sustainable Development Goals, as well as the UAE’s National Climate Change Plan.

Speaking on the occasion, Abri du Plessis, CEO, NIMR, said: “We are very excited to work side-by-side with ST Engineering to become the first manufacturer in the region to integrate hybrid electric drive systems into our armoured vehicles. The synergy reiterates NIMR’s consistent efforts to bring to market the latest technologies and push the boundaries of military innovation to meet the evolving operational requirements of our customers.”

Dr Lee Shiang Long, President/ Head of Land Systems at ST Engineering, said its hybrid system is an asset in military operations where speed and stealth count. “In addition to enhanced mobility, it is both efficient and built to support the energy requirements for future technologies.”

In 2019, the UK's Defence, Science and Technology Laboratory, Dstl, announced a £3.2 million investment into the latest vehicle technologies to boost the performance of the UK's Future Ground Combat Vehicles. The project, which is led by QinetiQ, in partnership with academia, military vehicle suspension specialists and Formula 1 motorsports engineers, will focus on innovative solutions for ground vehicle mobility, and is expected to exploit the potential provided by hybrid electric-drive systems.

Last August, the UK Ministry of Defence awarded a £3 million contract to NP Aerospace to demonstrate hybrid electric-drive (HED) systems on Foxhound and Jackal vehicles, and a MAN SV, using electric axle drive hub motors and inboard motors respectively. The project will be delivered in collaboration with General Dynamics Land Systems UK,  Supacat and Magtec, which manufactures electric-drive systems and components. Dstl will play a key support role in the delivery of the HED demonstrator project.

BAE Systems was awarded a $32 million prototype agreement by the US Army’s Rapid Capabilities and Critical Technologies Office (RCCTO) to integrate a Hybrid Electric Drive (HED) system onto a Bradley Fighting Vehicle. The development program is part of the Army’s effort to increase vehicle efficiency and boost power generation to support integration of future technologies and greater mobility for combat vehicles on the battlefield.

Read our story on the the biggest shake-up in armoured vehicle mobility as the UK Ministry of Defence turns to the worlds of motorsport and Hybrid Electric Drive to deliver future wheeled vehicle platforms that can move at speed over most terrain.