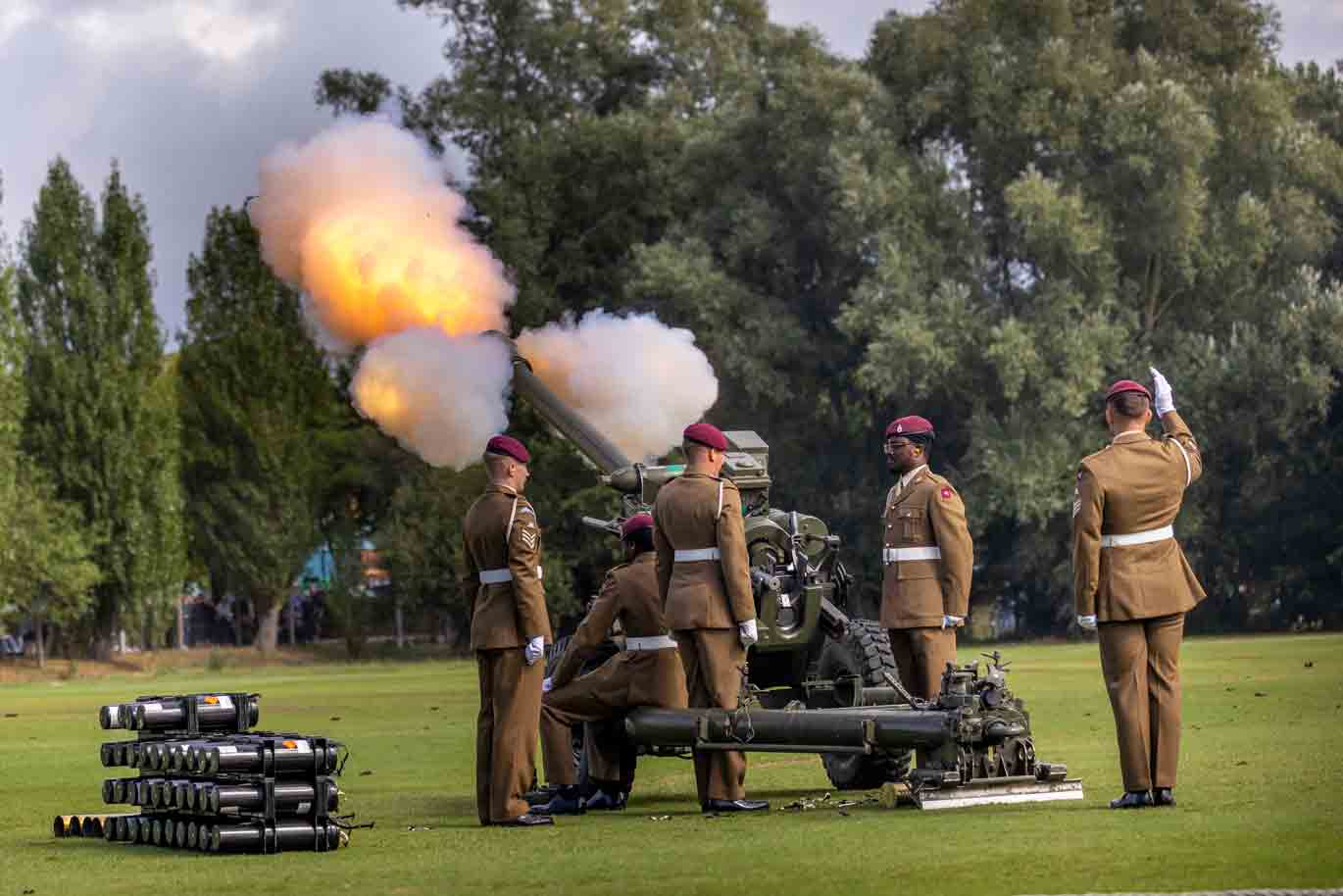 More than 90 rounds of death gun salutes were fired across the UK at 1pm on Friday to commemorate the life and death of The Queen, who served 70 years on the throne.

Flags were also lowered to half-mast at Army barracks and garrisons across the world to mark the death of Her Majesty Queen Elizabeth II who passed away on Thursday afternoon at Balmoral Castle in Scotland.

The salutes were held at major locations such as Hyde Park in London, Portsmouth Naval Base, which is home to almost two-thirds of the Royal Navy's surface ships, including the new aircraft carrier HMS Queen Elizabeth, the Tower of London, and Royal Navy ships at sea.

A different number of guns are fired depending on who is being paid respect to. The basic salute is 21 rounds, fired at ten second intervals, but in Hyde Park an extra 20 are fired because it is a Royal Park. Kings Troop Royal Horse Artillery fired the salute on Friday Hyde Park, the Honourable Artillery Company from the Tower of London, 105 Royal Regiment from Edinburgh Castle and Hillsborough Castle, and 104 Artillery Regiment from Cardiff Castle.

The gun used for the death salute is the 105 mm L-118 Light Gun, which has been used on operations in Afghanistan. The towed howitzer was originally manufactured in the 1970s by the Royal Armament Research and Development Establishment in Kent, which later absorbed into BAE Systems Land and Armaments.

HMS Queen Elizabeth, the largest warship in the Navy, which carries her namesake, tweeted: “Thank you, @HMSPWLS, we’ll do you proud.”

Defence Secretary Ben Wallace paid tribute to the Queen on Twitter stating that she was more than the Armed Forces' Commander in Chief, she was their guardian who championed their welfare and supported them before, during and after operations.

In fact, as a young woman, the Queen enlisted in the Auxiliary Territorial Service as a truck mechanic during the Second World War, apparently against the wishes of her parents, King George VI and Elizabeth the Queen Mother.

“We owe her a debt, we can never repay. May she rest in peace. God save the King.” First Sea Lord Admiral Sir Ben Key stated in his tribute.