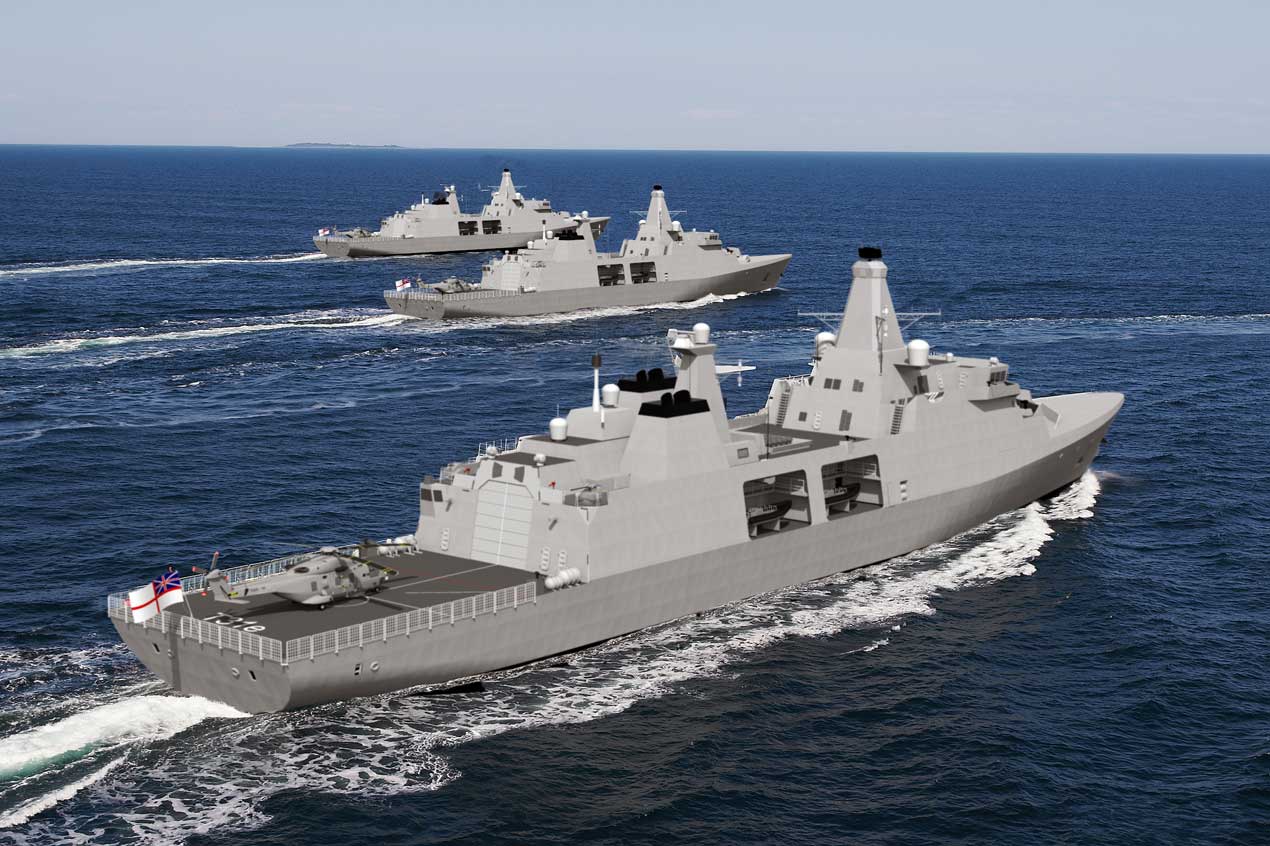 Launching the new platform, ‘Team 31’ led by Babcock and including fellow industry experts Thales, OMT, BMT, Harland and Wolff and Ferguson Marine – underlined the vessel’s established, “at sea” design baseline, which can be developed to meet global requirements.

With UK engineering at its core, and developing OMT’s Iver Huitfeldt hull form currently in-service for the Royal Danish Navy, Babcock says Arrowhead 140 will lower programme risks through its tried and tested baseline design, which is engineered to minimise through-life costs, whilst delivering a truly leading-edge frigate.

“Arrowhead 140 is a proven, capable, and adaptable general purpose frigate design that, if selected, will meet the UK Royal Navy’s and global customers’ expectations both now and in the future,” said Craig Lockhart, Babcock’s managing director, Naval Marine.

At almost 140 m, Babcock says the ‘wide beam’ ship is easier to design, build and maintain due to its slightly larger size. And with embedded “iFrigate” technology able to deliver digitally enabled through life support, Babcock says it offers value for money.  “Arrowhead 140 will provide increased survivability, operability and capability —compared to a standard 120 m design,” says Lockhart.

“When you consider that this ship can be delivered at no extra cost and that it will support improved radar performance, increase platform stability and facilitate better helicopter operations in bad weather, whilst enhancing crew comfort — we believe it will bring a significant edge to modern naval capability.”

The Type 31e will see the Royal Navy move away from its traditional procurement model through the acquisition of five ships to a tight schedule under a fixed-price contract, thereby avoiding costly design and requirement alterations inherent in previous shipbuilding programmes.

When outlining the Type31e requirement in September 2017, the First Sea Lord Admiral Sir Philip Jones stated that: “By bringing the RN’s requirements in line with the demands of the export market, we have the opportunity to replace the vicious circle with a virtuous one.”

The rationale behind this is to control and reduce costs by restoring competition to the complex warship manufacturing industry and use the economies of scale inherent in exports to grow the escort fleet in the long term.

The First Sea Lord also stated that, despite a budget cap of £250 million per ship (compared to £3.5 billion for the first three Type 26 frigates), the T31e will be a “credible frigate.”

Lockhart says more than just building a ship, Babcock Team 31 offers a unique opportunity for global navies to tap into the complete design, build and support capability for the T31e frigate.

The latest iteration of Thales’ TACTICOS combat management system with fully open architecture sets Arrowhead 140’s combat systems apart, he adds.. “Currently in service for 25 years and exported to 24 navies globally, this system and equipment in-service support package is flexible to customers’ needs over the lifetime of the platform and will maximise the combat system capability for customers.”