MBDA was awarded a £100 million demonstration and manufacture contract by the UK Ministry of Defence (MoD) for the Sea Ceptor air defence system for the UK Royal Navy’s  new class of frigate, the Type 26 (T26) Global Combat Ship (GCS). The advanced missile system will provide the principal air defence of the T26 and nearby ships against advanced airborne threats including sea-skimming anti-ship missiles, fast jets, helicopters, and UAVs.

MBDA says the contract is further evidence of the confidence placed in the capability and maturity of the Sea Ceptor system and its CAMM (Common Anti-air Modular Missile) munition by the UK MoD and the Royal Navy. 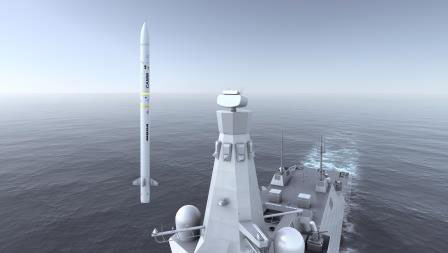 The contract will run for 10 years and involves support to the T26 design, as well as the manufacture of the electronics equipment required for the class of eight ships. The Sea Ceptor will replacing the aging Sea Wolf missile on Type 23 frigates.

James Allibone MBDA’s UK sales and business development director says MBDA will provide a common missile system for both naval and land use, thereby significantly reducing the cost that would have been involved in developing separate systems. The Sea Ceptor can be retrofitted to a different types of naval platforms: OPVs and large surface vessels.

With the Sea Ceptor now selected for five different naval platform types around the world, MBDA sees further potential for the system and the CAMM family of missiles with other navies. Dave Armstrong, MBDA executive group director sales and  business development and UK managing director states: “Naval air defence is more critical than ever given the growing capability of airborne threats.


“Customers appreciate that they are looking at a product which is at the very start of its lifecycle, a product that represents the very latest in air defence technology and one that will be supported with ongoing through life enhancements for at least the next 30 years or more.”