Getting To Grips With Robots

Biggest British military robotics exercise tests the use of COTs unmanned systems to provide forces with lower-cost tools on the battle field. 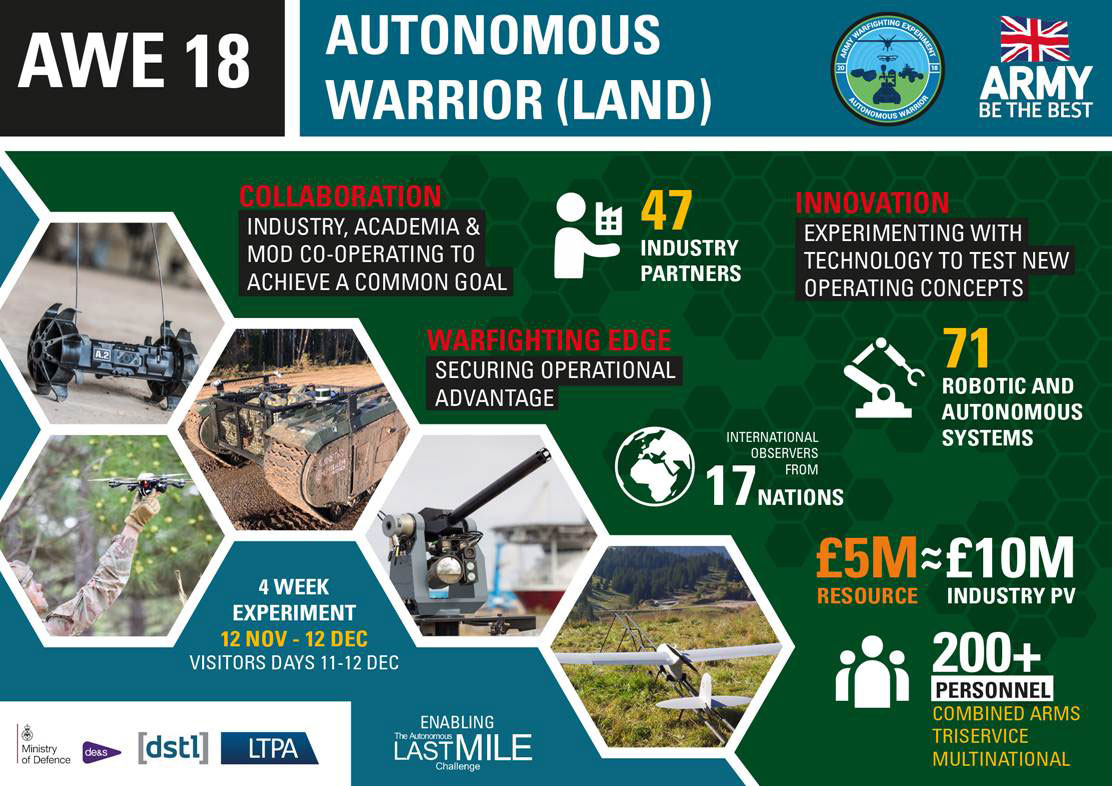 While UK Armed Forces conduct the biggest robot exercise in the military's history on Salisbury plains, a test programme investigating the use of swarming low-cost UAVs for collaborative missions has reached a critical phase.

On the heels of the Royal Navy's Unmanned Warrior and Information Warrior exercises, the month-long (November 12–December 12) Autonomous Warrior involving all three of the forces (Army, Navy and Air Force) and 47 industry partners, will test a range of unmanned aerial vehicle and autonomous ground vehicle prototypes, which are designed to reduce the danger to troops during combat.

The exercise aims to test technologies in more than 70 commercial off-the-shelf systems in surveillance, long-range and precision targeting, enhanced mobility and the resupply of forces, urban warfare and enhanced situational awareness.

During Exercise SAIF SAREEA 3, a combined military exercise between UK and Omani forces, which took place in October, British forces experimented with COTS UAVs to help them identify enemy positions.

The wide availability of COTS UAVs has not only captured the imagination of conventional armed forces. Terrorist organisations such as ISIS, have loaded them with explosives to attack Iraqi and US soldiers.

The relative affordability of COTS UAVs, compared to other, much larger medium altitude and high-altitude UAVs, which few countries can afford, makes them a disposable tool on the battlefield. If one is lost, it can be quickly and easily replaced. Individual soldiers can also easily deploy them to quickly survey an area, without having to call in the RAF, which operates the MALE RPAS.

The Ministry of Defence says the Royal Tank Regiment Battle Group from 1 Armoured Infantry Brigade provide the bulk of exercising troops and command and control for Autonomous Warrior. They are joined by more than 200 multinational, cross-service personnel, including the US Army, Royal Marines, RAF and the Defence Science and Technology Laboratory (Dstl), as well as industry partners and academia.

The exercise will finish with a battlegroup experiment, where the best ideas and products are tested in the toughest of simulated operational environments.

One of the key areas to be tested is the concept of autonomous last mile resupply of food, fuel and ammunition to the frontline.

Meanwhile, the UK's Defence and Security Accelerator competition is investigating the use of swarms of low-cost UAVs for collaborative missions. One or more swarming “Integrated Concept Evaluations” will be funded to the tune of £2.5 million.For the purposes of the competition, the use of 10 to 20 aircraft operating in “a co-ordinated and closely coupled fashion to achieve a common goal,” is envisaged.

The Many Drones Make Light Work campaign was first launched in 2016 and comprises different phases. The accelerator says: “The feasibility and utility of a number of key aspects have been proven through a combination of synthetic environments, bench-top tests and live flight evaluations.”

Phase 3, it says will further develop and integrate technologies with the objective of demonstrating a swarming capability, through the flight evaluation.