In Lockheed Martin's F-35 Full Mission Simulator, pilots can experience the fog of war, as if they were flying the real aircraft in combat, which would be difficult to recreate on live ranges. 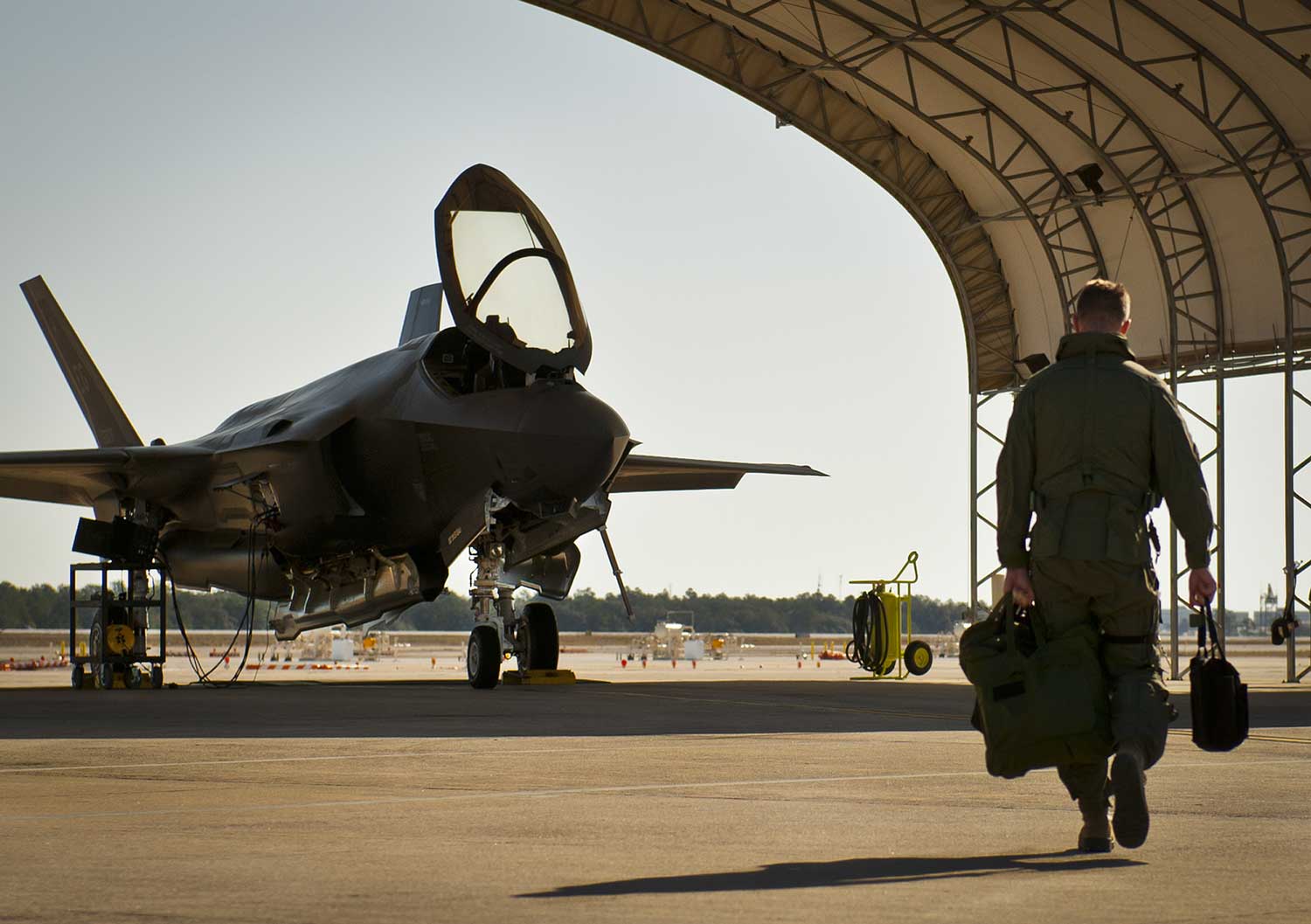 F-35 pilots pilots must complete up to 18 training events in the Full Mission Simulator before they transition to the single-seat aircraft where they will fly for the first time on their own. (Photo: US Air Force photo by Samuel King Jr.)

“Push the throttle forward, get ready on the stick,” says the engineer. “Pull back gently on the stick and you’re airborne. If you just ease it to the right. You’re 6,000 feet above sea level over Las Vegas. TThere’s all the famous hotels on the Las Vegas strip. I think we can see Trump’s casino.”

I’m at Rockwell Collins’s visual systems business based at Burgess Hill in the southeast of England, an area Michael Blackford, manager, programme management, Simulation & Training Solutions, EuMEA, describes as a “hotbed” for training and simulation in the UK. “This where we produce a little bit of magic,” says Blackford.

At the back of the otherwise nondescript brown brick industrial estate is the magic that Blackford is talking about: the Griffin Rear-Projected Dome visual training environment, which is designed for single-seat fast-jet and research applications. It comprises 25 projectors matched for colourand brightness so they present anhomogenous scene for fast-jet pilots.

The Dome was first manufactured in 2010 and can be used for the F-35 and other fast jets like the F-16. It incorporates a sophisticated high-resolution image generation system for “out-the-window” display. Everything on the screen covers the pilot’s full field of regard and the system can be adapted for any kind of cockpit anddisplays for every form of fast jet. There are screen cut-outs at the back and front, which match the canopy shape of the aircraft and the cockpit features the instrument panels used on the actual aircraft.

The Griffin Rear-Projected Dome provides the foundation for the Full Mission Simulator (FMS) Lockheed Martin uses to train pilots on its fifth-generationcombat aircraft, the F-35.

“The F-35 Full Mission Simulator is the most advanced, high-fidelity flight simulator there is,” says Mike Luntz, director of F-35 training at Lockheed Martin. The FMS is being used to train US Air Force, Navy and Marine pilots and international F-35 partners.

More than 470 F-35 pilots have been trained to-date. “It [the FMS] features aircraft components such as the stick and throttle that pilots would use on the actual aircraft to ensure the highest fidelity,” says Luntz. Everywhere an F-35 is stationed, Luntz says Lockheed Martin will have an FMS. International training on the F-35 will expand in the coming months as training facilities in the UK, Italy, Australia, Israel, Norway, South Korea and Japan are stood up. So far, Rockwell Collins has delivered approximately 48 Griffin Domes to some of the nine countries that are participating in the F-35 LightningII Joint Strike Fighter Programme. 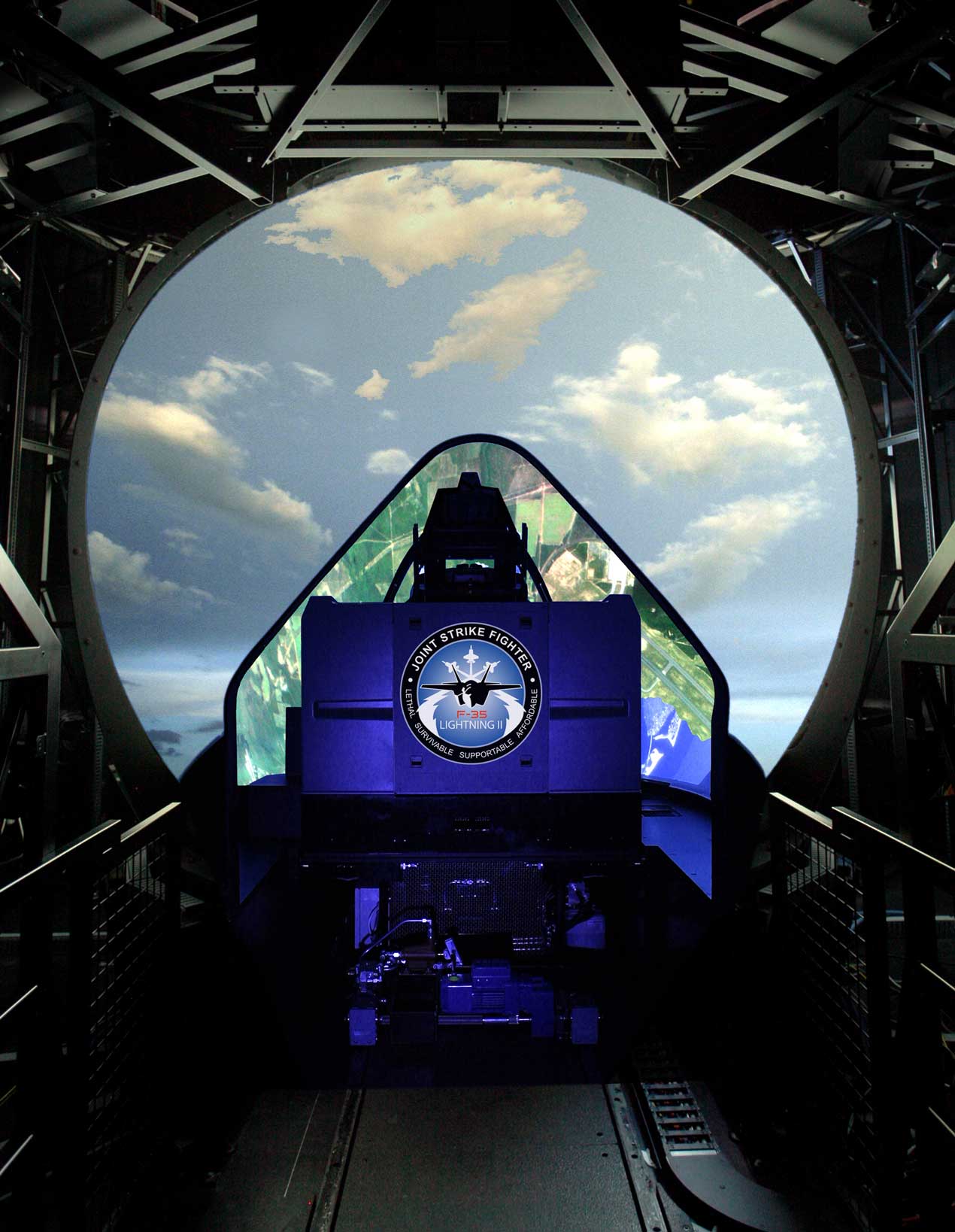 “We are the major contractor on the F-35 training system for everything outside the skin of the aeroplane,” explains Blackford, “in terms of how we represent the outside world and present it to the pilot. The image generator does the out-of-window seeing and rendering for head-down sensor views.”

Luntz says pilots must complete up to 18 training events in the simulator before they transition to the single-seat aircraft. There is no one else in the aircraft when the pilot flies it for the first time, so it is imperative that the simulator be incredibly realistic. “There has been a lot of focus by Lockheed Martin on ensuring that the simulator is absolutely right so pilots are well prepared when they go into the actual aircraft,” says Blackford.

Luntz says that for some users, F-35 training will be split approximately 50/50 between the simulator and live training in the field. “The feedback we’re getting from our customers is that they plan on doing more simulation in a synthetic training environment than they’ve done on legacy platforms,” says Luntz.

The Griffin Dome draws upon Rockwell Collins’s 40-years plus experience on the visual systems side and acquisitions it has made, including visual simulation solutions provider Evans & Sutherland.

The Dome is formed out of an acrylic sheet with no inclusions to cause distracting artefacts. It is sprayed with a specially formulated coating, which controls contrast and the way it reflects light. “It’s been refined over time to make sure it does what customers want it to and to ensure the pilot is not distracted,” says Blackford. In the case of the F-35, Rockwell Collins has provided a rail and scissorlift system, which automatically drives the cockpit into the Griffin Rear-Projected Dome and rises it up to thecorrect eye point for the pilot. The pilot also wears a helmet in the Full Mission Simulator.

Luntz says that pilots used a replica of the F-35 helmet that was modified for focal distance in the simulator, but he says they will begin to use the Gen III helmet, which is an integral part of the pilot’s interface with the aircraft, starting in 2018.

The WholeEarth synthetic environment used in the simulator enables pilots to literally fly anywhere in the world and recognise it. “Mountains are in the right place, at the correct height; the coastlines are correct; all major cities and towns are in the right place,” says one of Rockwell Collins’s engineers at Burgess Hill. “We add detailed insets so you can see the skyscrapers sticking out of the terrain. The runway we took off from is a detailed inset designed for the US Air Force. You’ve got correct lights, correct markings; physically it’s in the correct position on the earth, including where it points north, south, east, west, so they can match it to instruments on the aircraft and fly to it.”

Rockwell Collins teaches customers how to create their own detailed insets for their specific mission. Once they've done that, the installation becomes a secure site.

The Griffin Dome’s image generator renders the electro-optics, creating an output which is presented to the pilot’s eye. But the mission the pilot performs in the simulator is determined by Lockheed Martin. “A typical sortie in the simulator would be an hour and a half,” says Luntz. “The pilot would come in, be briefed on their mission and then fly that mission in the simulator.”

The same software that pilots fly with in the aircraft is used in the simulator. “It’s truly white knuckle,” says Luntz. “Not only from a visual perspective, but we can also challenge the pilot and put them in different operational scenarios they would see in combat.

“A major part of the simulator is how we simulate real-world training,” Luntz continues. “Out on a range you may see ground surface threats, other air threats. In the simulator, all of that is in high fidelity. We can put pilots in the mission scenarios to replicate the stress and fog of war they would see in combat. It would be expensive and sometimes impractical to do that in the field, but pilots can execute those scenarios in the Full Mission Simulator.”

Pilots can run a large variety of different mission scenarios in the simulator such as close air support, suppression and defeat of enemy air defences and blue water operations in support of the US Navy for the F-35 aircraft carrier variant. Pilots can also practice taking off and landing from aircraft carriers in various sea states.

“The feedback we’ve received from pilots so far suggests that the aircraft is easy to fly,” says Luntz. “A lot of the training we provide in the simulator is about how to manage the battlespace. A lot of the capability and advances in the aircraft pertain to information and battlespace management.”

The Full Mission Simulator is also used for mission rehearsal. “If a pilot has to deploy to an operational theater, they can rehearse the mission in the simulator or capabilities that they

might not want to exercise in the [real] aircraft,” says Luntz. “If there is a large force deployment, we can simulate that so when they go into a new area, they can put themselves in that environment. So, by the time they get to the operational scenario, they’re not going to be experiencing it for the first time.”

Air-to-air refuelling can also be simulated in the Full Mission Simulator. “We weren’t able to do that with previous simulators,” says Luntz, “in terms of recreating the complex scenario of getting the basket on the right part of the aircraft for refuelling. They can train to do that on the three different F-35 variants.”

Meanwhile, Rockwell Collins continues to work on enhancing the image generation capabilities of the Griffin Dome. “We’re pushing the Dome forward all the time to simplify maintenance and reduce through life cost,” says Blackford.