Eyes In The Sky, But At What Cost?

The RAF's Reaper Squadron recently celebrated more than 10 years of operations. But it has not been without risk or rigour for the new class of RPAS operators. 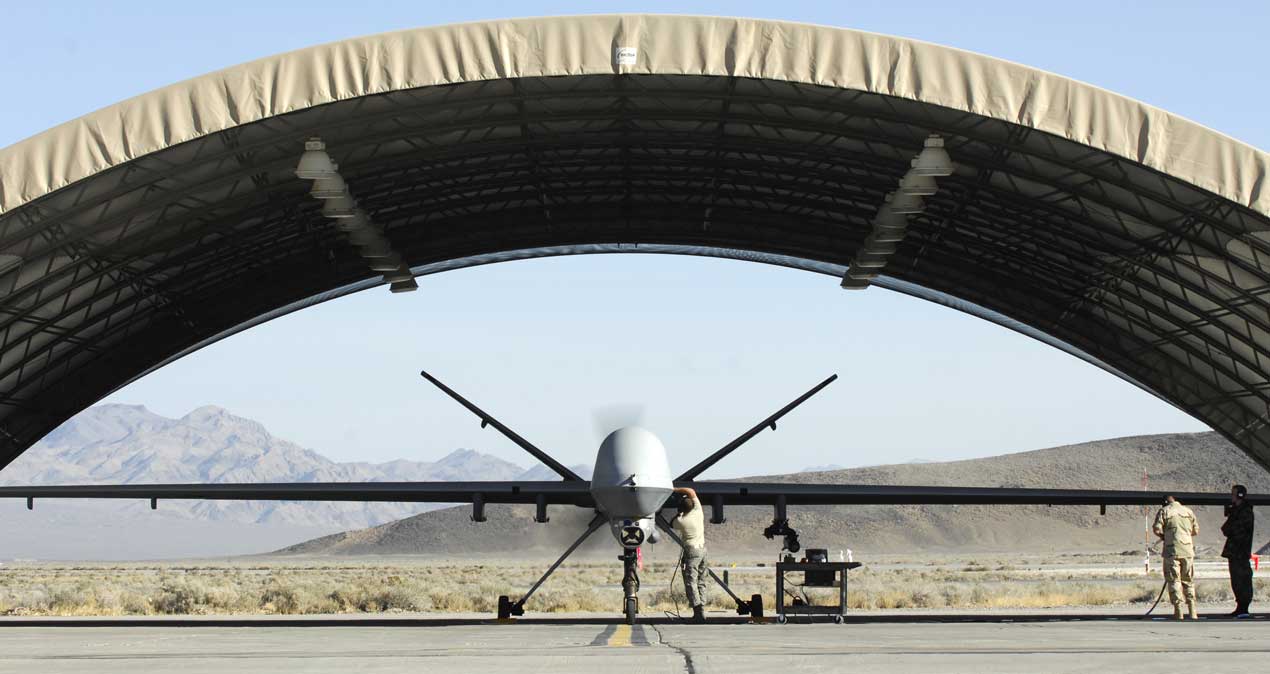 A Reaper MQ-9 RPAS based at Creech Air Force Bace, Nevada, USA prepares for a training mission over the west coast of America (Photo: MoD/Crown Copyright)

On the 4 December 2017, the Royal Air Force’s (RAF) MQ-9 Reaper Squadron notched up 100,000 hours of flying the remotely-piloted air system (RPAS) in support of Coalition combat operations, equating to more than 11 years of being airborne or travelling around the world 550 times.

“The ability of Reaper to discretely observe and monitor enemy activity for lengthy periods of time provides commanders with a hitherto unheralded view of the battlespace,” stated ISTAR Force Commander, Air Commodore Dean Andrew. The RAF

The Reaper was acquired as part of an Urgent Operational Requirement coming out of the UK’s involvement in Afghanistan (Operation Herrick). The RAF’s first Reaper Squadron, 39 Squadron based at Creech Air Force Base in Nevada, flew its first operational sortie in October 2007. The UK has 10 MQ-9 Reapers and seven Ground Control Stations.

In Afghanistan, the Reaper was primarily used for intelligence gathering to support ground troops. It can also be armed with 2x GBU-12 500 lb laser-guided bombs and 4x AGM-114 Hellfire missiles. During armed operations, the RAF’s MQ-Reaper typically deploys Hellfire missiles, which are designed to minimise collateral damage. The Reaper is not an autonomous system and cannot employ weapons unless commanded to do so by the air crew.

According to an RAF website, during Reaper operations in Afghanistan, only 459 weapons were fired – less than one weapon for every 120 hours flying. Most of the Reaper operations — more than 160,000 hours — involved non-armed reconnaissance.

The RAF’s Reaper Squadron is supporting RAF Tornado fast jet and Typhoon combat aircraft in combat operations against ISIL or Daesh in Iraq and Syria (UK involvement in those operations is codenamed Operation Shader).

A UK Parliamentary report: states that: “UK aircraft have flown over 3,000 missions as part of Operation Shader, and as of mid-February 2017 had conducted over 1,200 airstrikes against ISIS targets in Iraq and Syria." No indication was given, however,  how many of these strikes were conducted by the Reaper RPAS.

When it comes to the armed overwatch aspect of the Reaper, the popular press has presented RPAS as remote, clinical killing machines devoid of the “risk and rigour” associated with traditional military operations.

However, research conducted by Dr. Peter Lee, a Reader in Politics and Ethics at the University of Portsmouth, who is writing a book on the human dimension of the RAF’s Reaper force, debunks some of the myths surrounding the use of RPAS. The biggest myth, says Lee, is that Reaper operators are not exposed to risk.

RPAS operators are typically located  thousands of kilometres away from their targets or the battlefields where they provide "eyes in the sky" for forces on the ground.  But whilst they may not be subjected to the physical risks normally associated with combat, Lee says RPAS operators can be exposed to the same levels of combat stress and mental trauma as pilots of manned aircraft.

A Reaper operator at Creech Air Force Base in Nevada that Lee interviewed as part of research for his book stated:

“I’ve killed the enemy from both [conventional aircraft] and from the Reaper. The body’s reactions are the same – it surprised me. Your mouth goes dry and the hairs on the back of your neck stand up. Everything goes tense and you get that sick feeling in your stomach. You know what you are about to do.”

Lee links the mental trauma of Reaper operators to the use of  high-resolution sensors, which vividly depict what the operator is about to do and the aftermath of a strike. The sensors used on board the  UK Reaper for targeting purposes include an “infrared (IR) sensor, a colour/monochrome daylight electro-optical TV and an image-intensified TV.”

Additionally, he says Reaper sorties lasting up to 14 hours add rigour to RPAS operations with the concentration inherent in providing enduring intelligence, surveillance and reconnaissance and strike capabilities. These duties continue for the duration of a two-to-three-year tour on Reaper and not just for a four-to-six-month deployment, says Lee.

Whilst the RAF’s Reaper force was initially created by recruiting from pilots who qualified on other military aircraft (such as Tornado, Harrier, Apache, Nimrod, Puma and C-130)., Lee says “a gradual identity” is emerging for the RAF’s Reaper Squadrons, with operators seeing themselves primarily as RPAS operators rather than fast-jet pilots.

Reaper pilots recruited directly (not conventional RAF pilots) are not awarded flying pay. Instead, they are given a distinct brevet, whereas RPAS Mission Intelligence Co-ordinators, who are responsible for cross-checking target lists, can be paid more than pilots depending on their rank and experience.

Within this composite force, Lee says the balance is starting to shift towards directly recruited and trained Reaper operators and away from the use of former pilots from other aircraft types. There are fewer of the latter available as ex-Harrier, Tornado, Nimrod and other pilots reach the end of their RAF service.

Nevertheless, Lee is keen to stress the capabilities of these different forces complement one another as the Reaper offers the RAF enduring ISR capabilities that would have been impossible using manned aircraft given the cost-prohibitive maintenance and fuel requirements.

Another Reaper operator told Lee: “The air support that I am able to provide [troops on the ground] … directly improve[s] their rate of survival. If conducted ethically and effectively, they also minimise the extent to which they and the enemy are subjected to that conflict, hopefully hastening its resolution. Whilst this may appear to be a lofty sentiment, the direct effect my actions have on improving a soldier’s life in a conflict zone is the primary motivation.”

In addition to risk reduction, cost is central to the RPAS debate. When conducting operations with RPAS, fewer personnel need to be deployed in theatre, saving on logistics costs. Supporters also claim that because RPAS operators do not require physical flying training, money is saved, by using low-cost, synthetic environments.

However, research conducted by Time Magazine in 2012 found that despite a $4 million to $5 million price tag for an individual RPAS, costs are inflated by the need for infrastructure and R&D. The same article found that due to long Reaper sorties, four are required for each combat patrol with an overall cost of $120 million, compared to the equivalent capability provided by an F16 of $55 million.

Going forward, Lee says falling defence budgets mean the costs and benefits of RPAS will have to be evaluated against other assets, as with more traditional capabilities. The UK has already agreed a £100 million contract with General Atomics Aeronautical Systems for Reaper’s replacement as part of the Protector programme.