Armies, Air Forces and Navies around the world are mobilising to help overwhelmed health services deal with the global coronavirus pandemic. 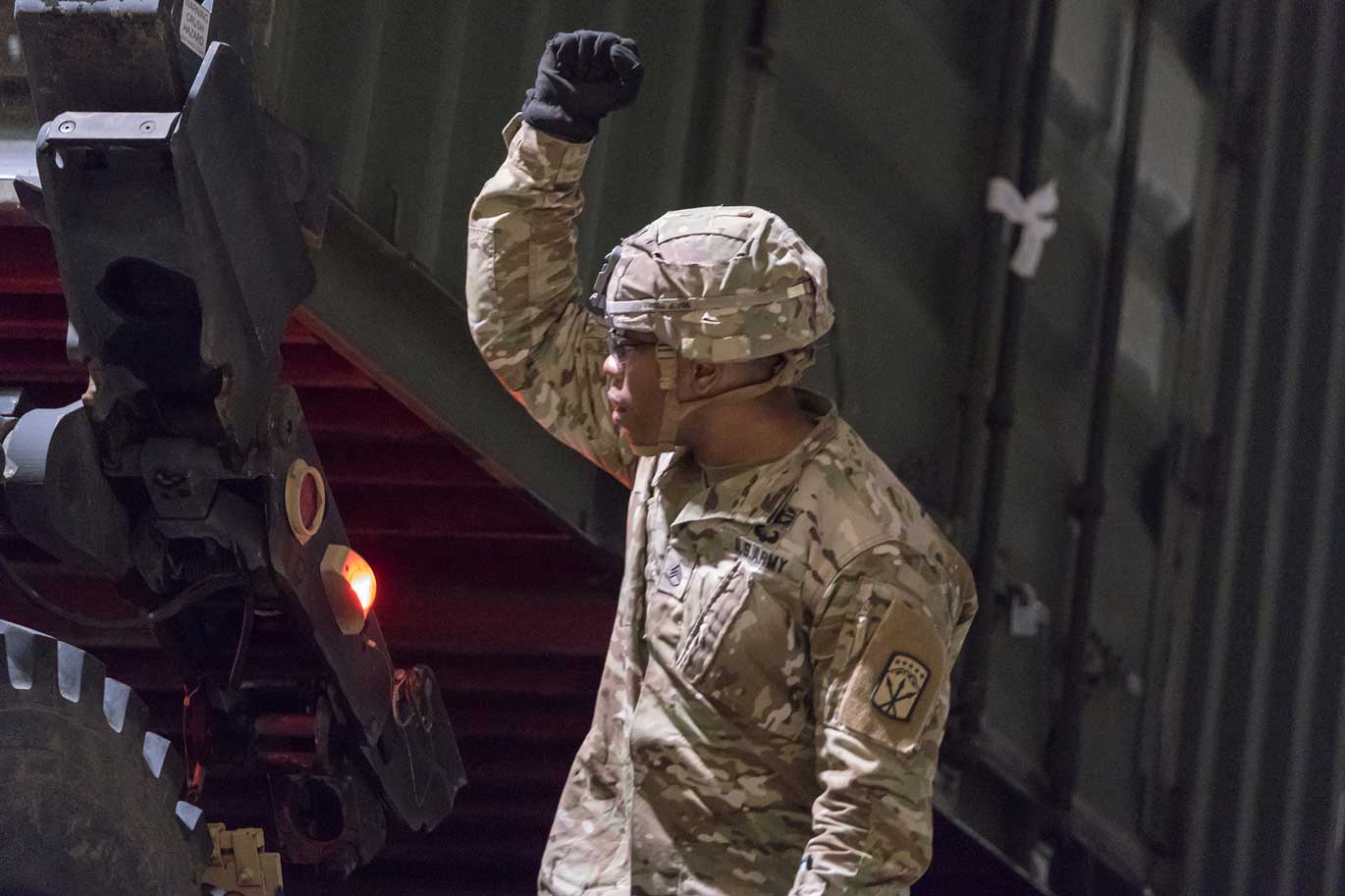 A soldier directs the offloading of a supplies container. Soldiers from the 627th Army Hospital based in Fort Carson, Colorado set up a field hospital in the Centurylink Field Events Center. (Photo by Jeff Markham)

Armies, Navies and Air Forces are trained to fight wars, but the coronavirus pandemic is seeing militaries across the globe respond and be challenged in unprecedented ways. With food and medical stocks in short supply and a growing military presence on the streets as countries go into lockdown, the world is at war, but they are fighting an invisible enemy.

The military, however is doing a lot more than merely enforcing governments' stay at home restrictions. In the UK, the Armed Forces are distributing personal protective and testing equipment to NHS hospitals, building field hospitals and providing urgent medical evacuations, airlift and transportation capabilities.

With the UK government coming under severe criticism for the lack of widespread testing for coronavirus, particularly for NHS staff, the UK Ministry of Defence (MoD) announced that military personnel are assisting the Department of Health and Social Care by delivering equipment that will test front line staff for coronavirus.

Dozens of universities, research institutes and companies across Britain are lending their testing equipment to new hub laboratories that will be set up for the duration of the crisis.

The MoD said personnel from all three Armed Forces have delivered equipment to several sites across the country. In addition, a small number of personnel are helping one of the test sites get the facility up and running as quickly as possible.

In East London, the military have helped transform the Excel conference centre, home to major military exhibitions like DSEI, into a field hospital with a capacity for 4,000 beds. The hospital is due to open this week starting with 500 beds and ramping up capacity as needed. The MoD said it continues to provide infrastructure, logistics and project management advice and is working with the National Health Service to understand where further hospitals could be set up in other parts of the country.

Around 150 members of personnel from all three services will be trained to drive supplies of oxygen to facilities if required. The first cohort of military personnel have completed their training to fill oxygen tankers, drive them safely and deposit the oxygen at NHS facilities across the country.

RFA Argus, which is the Royal Navy's only form of hospital ship, although it is not designated as such under the Geneva Convention, has set sail for the Caribbean to support the British Overseas territories amid the global COVID-19 pandemic and the incoming hurricane season. Most of the 100 or so hospital beds on board the Argus, which is operated by the Royal Fleet Auxiliary, are low dependency, with a small number of high dependency beds.

In the United States, military hardware and equipment is being mobilised as part of nation-wide measures to treat those affected by the virus. The US Army Corps of Engineers has identified more than 100 sites across the US which could be retrofitted to help local hospitals manage patient overflow amid the COVID-19 pandemic. The US Army Medical Research and Development Command at nearby Fort Detrick, Maryland, is also working on vaccines to combat the virus.

In New York, Army engineers will build approximately 3,000 rooms for non-COVID patients at a conference centre in Manhattan. Lt. Gen. Todd Semonite said using convention centres rather than constructing makeshift hospitals was a better way of dealing with the unfolding crisis.

US Navy hospital ships USNS Comfort and USNS Mercy sailed to New York and Los Angeles respectively. Each ship has a 1,000-bed capacity.

Navy medical professionals on both ships will assist local health care providers by offering care to persons who do not have the virus, freeing local hospitals and clinics to treat COVID-19 patients.

The Comfort, which arrived in New York on the 30 March, is a seagoing medical treatment facility with more than 1,200 personnel embarked for the New York mission, including Navy medical and support staff assembled from 22 commands, as well as more than 70 civil service mariners.

The vessel normally provides an afloat, mobile, acute surgical medical facility for the US military during expeditionary warfare operations. Its secondary mission is to provide full hospital services to support US disaster relief and humanitarian operations worldwide.

The two hospital ships have already started treating their first set of patients. All patient transfers to the naval vessels are coordinated with local hospitals. Patients are not accepted on a walk-on basis.

“The last time that this great hospital ship was here [in New York] was in the wake of 9-11, where she served as respite and comfort for our first responders working around the clock,” said Rear Admiral John Mustin, vice commander, US Fleet Forces Command. “Our message to New Yorkers – now your Navy has returned, and we are with you, committed in this fight.”

While the Navy mobilises to help governments and health services at breaking point, some US Navy operations have been sidelined by the spread of the virus on board ships at sea. In March, USS Theodore Roosevelt, a Nimitz-class nuclear powered aircraft carrier with 5,000 crew members, was forced to dock in Guam after an outbreak of coronavirus on board. Eight sailors with mild symptoms (muscle aches, sore throats) initially tested positive for COVID-19 and were airlifted off the ship to a Defense Department facility in Guam. None of them were hospitalised, but The New York Times reported that the captain of the ship called on the Pentagon to do more to avoid the loss of lives.

According to The New York Times, the Theodore Roosevelt's Captain Brett Crozier said the Navy had failed to provide him with the proper resources to combat the virus by moving sailors off the vessel. Initially the Navy stated that the 5,000 strong crew on board the aircraft carrier would not be allowed to enter Guam. But according to CNN, some of the crew are now quarantined in hotel rooms and Navy officials expect to have the bulk of the crew off the ship in the next few days, although 1,000 may need to stay on board to look after the ship's nuclear reactor. More than 90 sailors from the ship have now tested positive for the coronavirus, says CNN.

In Germany, the Air Force has repatriated citizens from overseas locations such as Wuhan in China where the virus first appeared last November . The Federal Office for Equipment, Information Technology and Use of the Bundeswehr (BAAINBw) is also helping the German Ministry of Defence with the urgent supply of protective masks and goggles, disinfectants and disposable gloves. The BAAINBw contracted the delivery of 300,000 goggles and protective masks within the first 24 hours after the request for administrative assistance. In a short space of time, 36 contracts with a volume of around €241 million have been concluded.

Prime defence contractor Rheinmetall is stepping in to support the German government in the coronavirus crisis by supplying high-quality respiratory protection masks. Thanks to its global production and sales networks, especially in China, Rheinmetall said it had succeeded in sourcing urgently needed protective equipment. Within a few days, around a million Chinese-made masks (protection class FFP2) will be supplied to the responsible Bundeswehr procurement authorities in Koblenz. Together with a partner company, Rheinmetall has taken complete charge of the procurement and transport logistics as well as quality inspection. A contract to this effect was signed with the BAAINBw. The contract encompasses an option for the supply of a further five million masks by Rheinmetall.

“In taking this step, we’re not just trying to do whatever we can to halt the spread of the coronavirus in Germany,” said Armin Papperger, chairman of the executive board of Rheinmetall. “We specifically want to help the people who are helping us: doctors, emergency medical technicians, nurses, care providers – in short, the folks whose help we all depend on. And that goes for the civil and medical sphere alike.”

In addition, Rheinmetall has identified further areas where it can provide quick support. For example, in South Africa, a plant operated by Rheinmetall Denel Munition near Cape Town is already producing around a thousand litres of disinfectant a day, something urgently required by the country’s healthcare sector. The company is also examining ways of furnishing protective clothing and more masks on a large scale, as well as assembling medical equipment such as ventilators.

But with many countries imposing export bans on essential medical supplies such as protective equipment, disinfectants and ventilators, there has not been a coherent response across Europe when it comes to the sourcing of this equipment. In times of need, old enemies have suddenly become foes. While many NATO countries in Europe perceive Russia as the greatest threat to the alliance's security, Russia has capitalised on the lack of unity across the EU when it comes to the provision of medical supplies, by assisting countries like Italy, one of the worst-hit countries with more than 13,000 deaths so far from COVID-19.

The Russian Ministry of Defence sent nine transport aeroplanes filled with medical equipment and specialists to Rome in late March. Russian epidemiologists and specialists from the Russian Defence Ministry NBC protection troops, together with Italian military specialists, have also carried out sanitisation and decontamination operations in the Lombardy region of Italy where the country's outbreak first erupted in March.

In France, the Direction générale de l'armement's MNRBC center (nuclear, radiological, bacteriological and chemical control) is working with the textile industry to try and devise alternative sources of personal protective equipment. The DGA's mission is to measure the filtration efficiency of particles from samples of masks or fabrics sent by manufacturers, mostly from the textile sector. To do this, each mask is placed on a mannequin head placed in a box filled with salt particles. The head simulates human breathing. The comparison between the density of particles present in the mouth and that contained in the box makes it possible to calculate the percentage of particles stopped by the mask. This method makes it possible to assess the filtration efficiency of each mask.

We're interested in hearing from military personnel about their experiences of dealing with the COVID-19 pandemic. Please email info@defenceprocurementinternational or message us on Instagram. 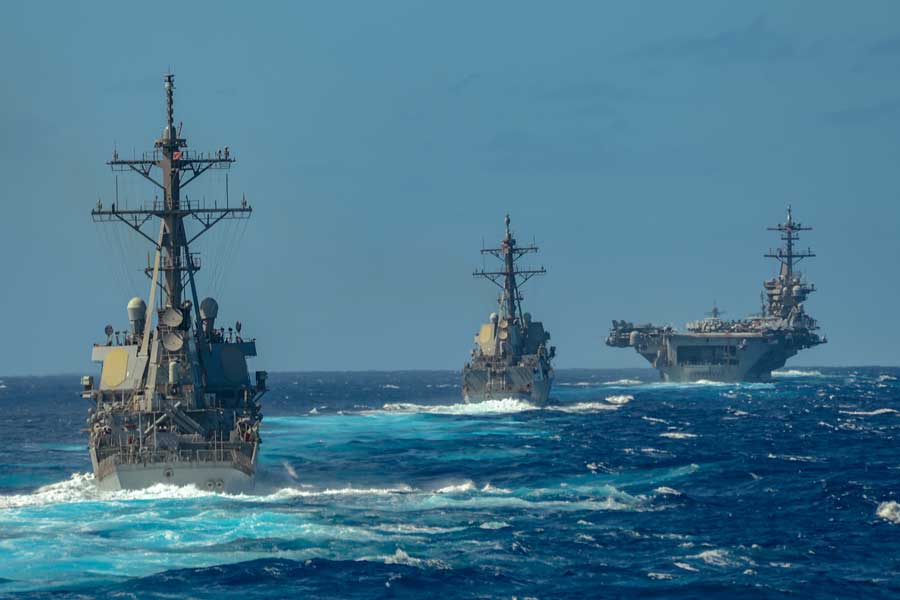 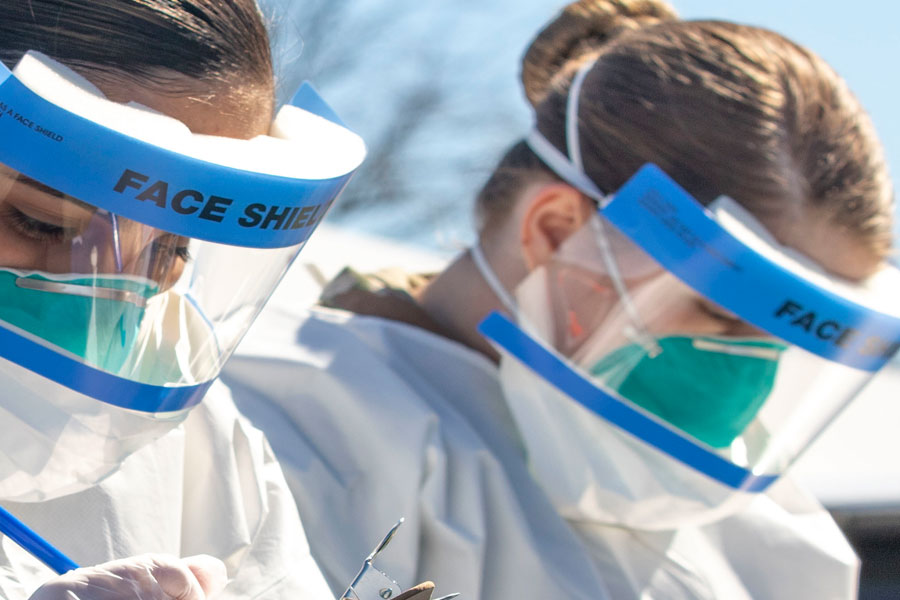