What is Russia's strategy in Ukraine and what would a Russian invasion look like?

By amassing forces on Ukraine's border, Russia is demonstrating to Ukraine and the West that it wants its buffer zone with the West to remain intact and NATO free. 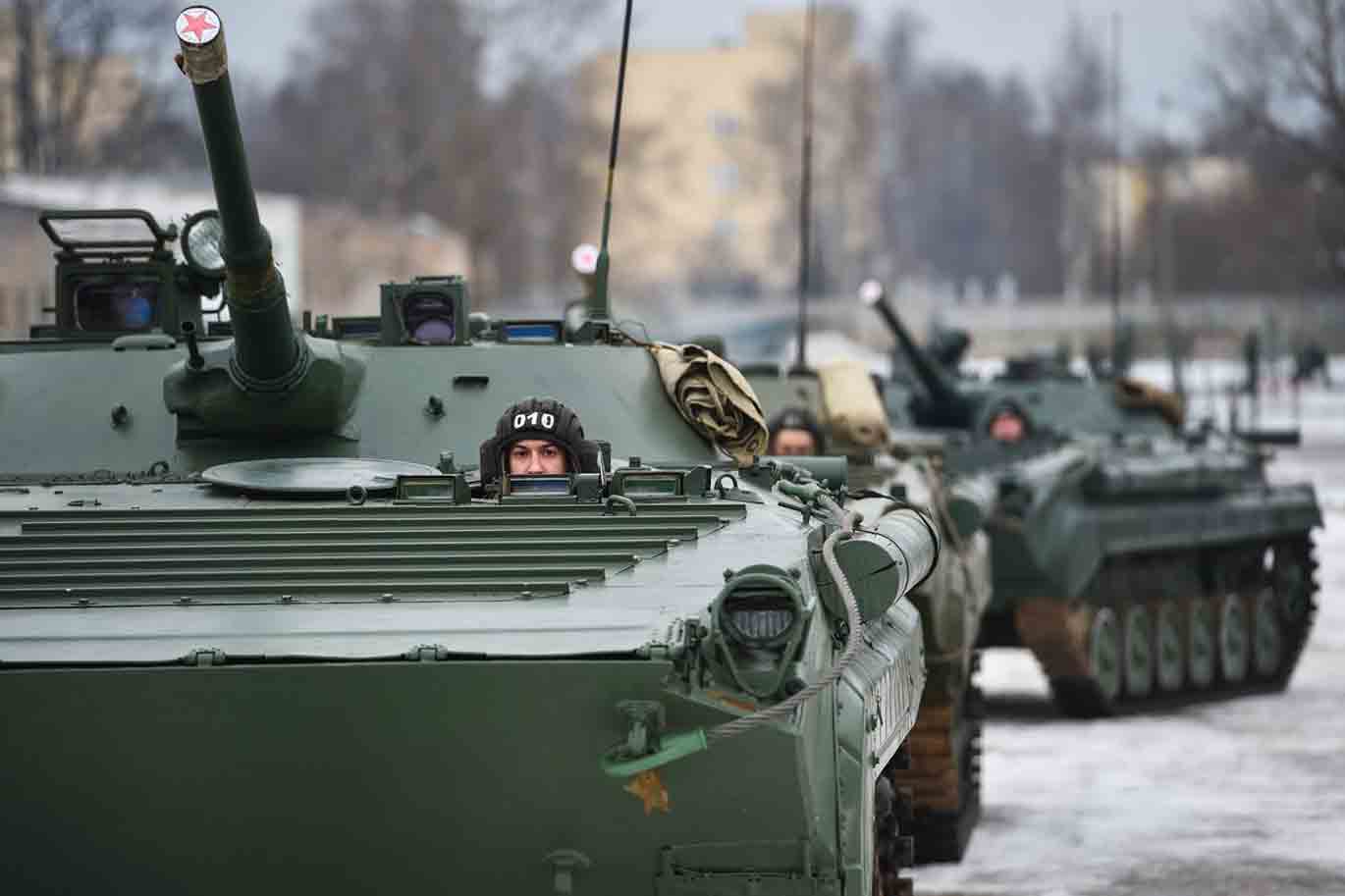 Since media reports emerged in November that 100,000 Russian forces, equipped with tanks, artillery, rocket and ballistic missiles, had amassed on the border with Ukraine, the US and NATO allies have been on tenderhooks waiting to seeiing tensions with the West will turn into a full-blown invastion. Having annexed Crimea in 2014, nothing can be ruled out when it comes to Russia's intentions.

If Russia did invade Ukraine, the US and NATO have said it would pay a high price, but it is unclear what that actually means. Although 30 of the UK's "elite troops" are already in Ukraine to train Armed Forces there on anti-tank weapons, over the weekend UK Foreign Secretary Dominic Raab was quoted as asying it is highly unlikely the UK would send troops if Russia did invade Ukraine. The UK, and other NATO allies are more in favour of imposing harsh economic sanctions, including cutting Russia off from the interbank payment system, SWIFT, or imposing restrictions on the Nord 2 pipeline.

The US and NATO are unlikely to repel a Russian invasion, Seth Jones, senior vice president, Harold Brown Chair, and Director of the International Security Program at the Center for Strategic & International Studies (CSIS) writes, that, if the US and its European partners ultimately fail to deter a Russian invasion, they should support Ukrainian resistance through a combination of diplomatic, military, intelligence, and other means. “The United States and its European partners cannot allow Russia to annex Ukraine,” Jones writes in a January 13 brief. “The West’s appeasement of Moscow when it annexed Crimea in 2014 and then orchestrated an insurgency in Eastern Ukraine only emboldened Russian leaders.”

The threatening rhetoric has escalated on both sides in recent weeks. Following a meeting of the NATO-Russia Council on the 12 January, which saw at least 28 NATO, European allies and Council members in dialogue with Russia, NATO Secretary General Jens Stoltenberg stated: “Any use of force against Ukraine would be a severe and strategic mistake by Russia, and that it would pay a high price.” Stoltenberg called on Russia to withdraw its military forces from Georgia, Ukraine, Crimea and Moldova, where he says they are uninvited and not welcome.

The combined efforts of the US, the EU and NATO to deter Russia in recent months appear to have failed, says Hugo Crosthwaite, lead analyst for Eurasia at security intelligence firm Dragonfly. Even the sanctions the US has threatened seem to have had little impact, he says, with Russia having effectively sanction-proofed its economy. "Russia’s military build-up means it can now begin a ground operation or launch a devastating missile and artillery attack at little to no notice – although an invasion still does not appear imminent just yet.

Having earlier dismissed the prospect of sending in US forces,  President Joe Biden is also reported to be reconsidering his position on Ukraine. According to The New York Times, Biden is now considering whether to send in thousands of troops, warships and aircraft to the Baltics and Eastern Europe.

What is Russia's strategy in Ukraine?

So, why is Russia amassing forces near Ukraine's border? What is its end goal? Moscow has voiced concerns at NATO's so-called expansion eastward, which it sees as an attempt to establish a "zone of influence" in Ukraine. Since Russia's annexation of Crimea in 2014, which caught the West and NATO by surprise, thousands of NATO forces have been on rotating deployments in the region to bolster the alliance's eastern flank. Most of its four multinational battle groups are in the Baltic countries (Estonia, Lativa and Lithuania) and Poland.

According to Carnegie Europe, by the summer of 2017, NATO had a total of 4,530 troops on the border with Russia grouped under four battlegroups led by Germany (operating in Lithuania), the United States (Poland), the United Kingdom (Estonia), and Canada (Latvia). On a page entitled, Russia Setting the Record Straight, NATO argues that its enhanced forward presence in the eastern part of the Alliance is meant to prevent a conflict, not provoke one, and says it is a response to Russia's use of military force against its neighbours and its military build-up in the Baltic region and beyond.

Today, NATO announced that its Allies were putting forces on standby and sending additional ships and fighter jets to NATO deployments in eastern Europe, to reinforce deterrence and defence as Russia continues its military build-up in and around Ukraine.

Denmark is sending a frigate to the Baltic Sea and is set to deploy four F-16 fighter jets to Lithuania in support of NATO’s long-standing air-policing mission in the region. Spain is sending ships to join NATO naval forces and is considering sending fighter jets to Bulgaria. France has expressed its readiness to send troops to Romania under NATO command. The Netherlands is sending two F-35 fighter aircraft to Bulgaria from April to support NATO’s air-policing activities in the region, and is putting a ship and land-based units on standby for NATO’s Response Force. The United States has also made clear that it is considering increasing its military presence in the eastern part of the Alliance.

But while the amassing of US and NATO forces on its eastern flank, is an unwelcome development, it is unlikely to have been the only catalyst for Russia's show of force on its border with Ukraine. Russia's main bone of contention appears to be the prospect of Ukraine joining NATO. In Deember, Russia called on NATO to stop admitting any new members and to withdraw its forces from Eastern allies. While NATO says it is open to further dialogue and is looking at ways to increase transparency of military exercises, reducing space and cyber threats, non-proliferation and arms control, Ukraine's potential membership of NATO remains a major sticking point. Stoltenberg said every nation has the right to choose its own path. “Only Ukraine and 30 allies can decide when Ukraine is ready to become a NATO member. Russia doesn't have a veto on this. Allies are ready to support Ukraine in its path towards [NATO] membership.”

With the US, NATO, and the EU all supplying Ukraine with additional military equipment – Russia sees the prospect of NATO weaponry as a huge threat to its own security, observes Lucinda Ritchie, Europe Country Risk Analyst at Fitch Solutions. Turkey has supplied Ukrainian Armed Forces with TB-2 Bayraktar armed drones, and the US has permitted Baltic countries and NATO allies to send US-made weapons such as Javelin and Stinger missiles to Ukraine.

By amassing forces on Ukraine's border, Ritchie says Russia is trying to visibly demonstrate to Ukraine and the West that the current security architecture is untenable, and that it wants the buffer zone to remain intact and NATO free. “Russia fears Western-backed uprisings in its backyard,” she explains, “so limiting Western influence is one way of preventing protest movements from spilling over into Russia. It's a way for Russia to re-establish a wider sphere of influence.”

Yoel Sano, head of Political Risk at Fitch, says the current dispute goes beyond Ukraine. “Russia and the West are competing for influence, in other places in the Baltic Sea, Bosnia Herzegovina, and the Eastern Mediterannean (Libya, Syria), Central Asia, and the Arctic as a result of warming temperatures there making natural resources and shipping routes potentially more exploitable.”

Ritchie says ongoing fighting in the separatist-controlled Donbass region has been expensive and drawn out, with more than 10,000 casualties since 2014. The Russian economy isn't delivering improvement in living standards, she says. “It has one of the highest excess death rates in the world. Public services are chronicly underfunded. Misadventure in Ukraine could stir up discontent. But we can't rule anything out. In terms of security guarantees between the US and Russia, nobody is under any illusions that it is going to take a long time for both sides to find common ground on Europe's security architecture.” Any architecture put in place would need to include agreement on aspects such as energy security, cybersecurity, nuclear arsenal modernisation and future reductions.

What could a Russian invasion look iike?

As the army with the biggest land power in Europe, Russia has invested heavily in new and modern capabilities, many of which are likely to feature in any possible invasion of Ukraine.  The Russian Army has approx. 280,000 troops, but if it is serious about controlling the whole of Ukraine, Col. John B. Barranco, a 2021-2022 senior US Marine Corps fellow at the Scowcroft Center, says it would need to call up most of its 250,000 reservists, which could meet with some resistance.

Since Russia's annexation of Crimea in 2014, Lorenz Unger, Senior Europe Country Risk Analyst at Fitch, says Ukraine has significantly ramped up its military capacity. Battle ready troops have increased from 6,000 in 2014 to around 150,000. Ukraine's military is also better equipped than it was in 2014, with $2.5 billion in military aid from the US. Ukraine also has six Bayraktar TB2 medium-altitude UAVs in its arsenal, supplied by Turkey, and is looking to acquire or build more. However, Jones of CSIS, says the Russian military is significantly stronger and more capable than Ukraine’s, and the US and other NATO allies have already indicated they are unlikely to deploy their forces to Ukraine to repel a Russian invasion.

In his January 13 brief, Jones outlines three possible axes of advance by Russia to seize Ukrainian territory: a northern thrust, possibly attempting to outflank Ukrainian defences around Kiev by approaching through Belarus; a central thrust advancing due west into Ukraine; and a southern thrust advancing across the Perekop Isthmus.

Unger believes the risk of tougher Western and US sanctions would outweigh any benefits for Russia from invading Ukraine. But Crosswaite says Russia has effectively sanction-proofed its economy, and that its military build-up means it can now begin a ground operation or launch a devastating missile and artillery attack at little to no notice.

Russian ships, tanks and troops were on the move again, according to media reports over the weekend, with Russian landing ships that can carry tanks, troops and other military vehicles, en-route to the Mediterranean for a training exercise. But as the English Channel, Strait of Gibraltar, and Bosporus, are all controlled by NATO allies, the Atlantic Council argues that any amphibious assault, which is costly and complex, seems highly unlikely and has never been attempted before by Russia.

Crosthwaite says Russian forces are unlikely to attack Kyiv. either via ground assault or air and missiles. "Russia’s main goal in any military operation would be to force Ukrainian President Volodymyr Zelensky to resign quickly, and offer wide-ranging concessions from NATO membership to the status of Donbas. We assess that the Kremlin probably sees incapacitating the Ukrainian military and critical infrastructure east of the Dneiper river as enough to bring President Zelensky to negotiate."

He says the most likely scenario for an invasion would be a rapid Russian ground assault across multiple fronts combined with missile and artillery strikes, drawing Ukrainian forces into large battles that Russia can win through technological superiority and numbers.

“The Kremlin almost certainly sees a prolonged offensive with forces deployed to hold territory as a worse-case scenario, which may incur losses that would play badly at home, and provide an opportunity for NATO and the US to intervene indirectly against Russia. As such, acting first and hardest seems crucial, not least so that it can present the operation as a fait accompli to President Zelensky, NATO and the Russian and Ukrainian people.”